Language conference to wake the spirit of the ancestors 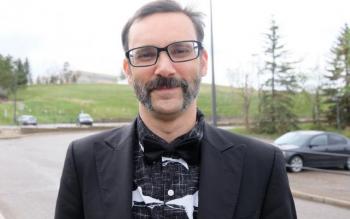 Conor Snoek, conference organizer, and with the University of Lethbridge’s Department of Indigenous Studies.

“We need to take back our own voice. We need to be empowered. The spirit of our ancestors’ voices are awaking.” — Sherry Letendre.
By Shari Narine
Windspeaker.com Contributor

Kyle Napier is passionate when it comes to Indigenous language acquisition.

“My connection to language isn’t just in my bloodline, but it’s also with my community. It’s with the generations that aren’t born yet. It’s with the ancestors who wouldn’t necessarily be able to speak the language I’m speaking today. The reason that my heart beats is for my ancestors and for those future generations,” he said.

Napier is a member of the Northwest Territories Metis Nation with Dene and Cree ancestral connections. He calls himself an “early learner” of Cree and Denededline and aspires to become fluent in both languages. That fluency is what he refers to as “language acquisition.”

Napier’s presentation on the Cree language will be one of 10 addressing Indigenous languages at this year’s Conference on Linguistics being held in Lethbridge Nov. 16.

Conor Snoek, conference organizer, and with the University of Lethbridge’s Department of Indigenous Studies, says focusing on Indigenous languages was a natural fit. The United Nations has declared 2019 the International Year of Indigenous Languages.

“Most of the languages are endangered. That is, most of them are losing speakers. So there’s been quite a strong interest from communities to work to try to understand their own languages in a strategic way to help things like language teachings,” said Snoek.

“We have quite a few linguists in Alberta and graduate students working on Indigenous languages.”

Napier is one of those graduate students. Presently in his second year of a Master of Arts degree in communications and technology at the University of Alberta, he is also research assistant to Dr. Lana Whiskeyjack, an assistant professor at the Faculty of Extension. The two have co-authored the paper he will be presenting: “Reconnecting to the spirit of language.” The presentation is on Cree language revitalization, acquisition and reconnection.

As part of his research, Napier undertook an extensive literature review “outlining every infraction that disconnected people from their language,” including removal from the land.

The project aims to create language resources, through visual and digital stories, that community members can access.

Napier says he hopes to build connections at the conference, as well as find out from other presenters what methodologies were successful in meeting the needs of the Indigenous communities.

The conference is for linguistic professionals as presentations will be technical. However, Snoek says nearby Indigenous communities have been invited. ULethbridge is located in Blackfoot territory.

Linguistic professionals and students are working within communities to “describe” the languages, Snoek says, which means recording the patterns of speech, grammar and vocabulary. Most Indigenous languages in Alberta, he adds, are “a little bit described, but what we would call under-described.”

For the work to be undertaken, linguists must be informed by the community, says Sherry Letendre, who previously worked with Alexis Heritage and Language. She is now in her third year of studies at UAlberta completing her Native Studies degree. She has a community certificate from the Canadian Indigenous Languages and Literacy Development Institute (CILLDI) out of UAlberta.

The Alexis Nakota Sioux Nation has been working for years with linguists and in particular CILLDI.

“Language revitalization is like waking up the spirit of our ancestors… Part of it is also teaching the culture, teaching the history. It’s teaching the ceremonies. There’s language and culture in every part of our lives,” said Letendre.

She firmly believes that work that creates resources for Indigenous languages must remain with the community and must not be appropriated by the linguist or their organization.

“Despite the politics and historical tensions that exist between Indigenous and settlers, especially in research, we will always have our language because of the collaboration with linguists. We have a written language that will always remain,” she said.

However, Letendre believes that it is important for more Indigenous people to become linguists.

“We need to take back our own voice. We need to be empowered. The spirit of our ancestors’ voices are awaking.”

Napier also believes that Indigenous voices are important when it comes to the work of acquiring, revitalizing and reclaiming Indigenous languages. He points out that since 1857, Indigenous languages have been appropriated by non-Indigenous people. He also notes that since 1970, when First Nations people were able to earn post-secondary degrees without losing their Indian status, they’ve been able to play a vital role in language acquisition.

“We are seeing an era of Indigenous resurgence, where people are allowed to own their research,” said Napier. “It’s critically important for those voices to be put at the forefront, not non-Indigenous voices… My personal research is that indigenous pedagogies and epistemologies are often overlooked and not included and that needs to change.”

That doesn’t mean non-Indigenous linguists haven’t done valuable work, he says. Napier points out that Snoek, who is non-Indigenous, is one of his research references on work he is doing on Dene Suline.

The one-day conference will be followed up on Nov. 17 with a workshop to teach Indigenous languages.

“Most communities face a lack of trained teachers,” said Snoek “At the moment there is nowhere in the province you can go to become an Indigenous languages teacher. We are trying to get to the point where we would have university programs to actually teach people that.”

Snoek is hopeful the workshop, which could become a regular event, can provide “some basic tricks of the trade” in language teaching.

“In the future it’s really going to be the Indigenous teachers in the community that develop these techniques better. But at the basis, there needs to be an understanding of what is an adult learner going through when they’re learning a language they don’t hear every day,” said Snoek.