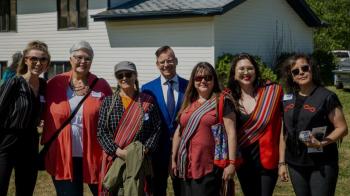 The Willow Lake Métis Nation celebrated the purchase of lands that will help bring their members home to territory in northern Alberta. Photo by Nicholas Vardy

Willow Lake Métis Nation (WLMN) celebrated a major milestone this month as the members officially purchased traditional homelands with money acquired through a partnership with Suncor.

“Today we come together in the original spirit of treaty,” said Justin Bourque, CEO at WLMN.

“We learn from each other to celebrate and to foster relationships that mutually help us to thrive. We are beyond thrilled that for the first time in Willow Lake Métis Nation history, we welcome our friends on Willow Lake lands in person. We are blessed to meet within the ancestorial homeland of the Métis people, the traditional territory of Treaty 8.”

The members purchased a 205-acre parcel of land near Anzac, Alta., that is now named Sohkastwâwin, a Cree term meaning “the act of being resilient.”

“(These) are just some of the key aspects to our resilient ecosystem, targeted to provide the WLMN with food, power, culture and social security in an uncertain climate concerning future. That sounds like Sohkastwâwin to me,” said Stella Lavallee, president, manager of government community relations for WLMN, during the official ceremony.

Lavallee went on to explain how the people of WLMN mirrored the meaning of Sohkastwâwin and now they will have the opportunity to form the community that will benefit generations to come.

For decades, the community has been scattered across northern Alberta, never having a place to call home.

The land acquisition was part of a partnership developed a few years ago with Suncor and Indigenous communities located in the Regional Municipality of Wood Buffalo.

Together with four other Métis communities and three First Nations, the group began to collaborate on ideas about how Suncor could aid in a brighter future for them.

The collaboration was officially called the Astisiy group.

Astisiy is a Cree word for thread made from sinew. Sinew is a byproduct of dried animal tissue that is then used to weave clothing together or make dreamcatchers.

About a year ago, the Astisiy group acquired a 15 per cent equity interest in the Northern Courier Pipeline from Suncor. This pipeline connects Fort Hills oil sands operation to the east-tank farm facility in northern Alberta.

The equity WLMN received from the pipeline agreement in the first year allowed for the land acquisition.

“We’ve heard from communities that opportunities like this are critical to them,” said Brienne Alarcon, Suncor’s manager of Indigenous and community relations for the Wood Buffalo Region.

“You have to have skin in the game,” said Ron Quintal from Fort Mckay Métis Nation in a release. “Our communities had to raise the capital to actually make this investment. Having ownership of this asset is a paradigm shift around Indigenous involvement in major energy projects.”

Alarcon said “this stable and structured revenue” will provide multigenerational revenue for community members for many years to come.

The communities will be able to use this equity for various programs and community initiatives, with all the decision making completely up to each community.

Another partnership WLMN established through the land acquisition is with The Resilience Institute (TRI). TRI is a national education and research institute that partners with local and Indigenous peoples, academia, and industry on initiatives to “build resilience to

On the TRI website they describe climate change as “opportunities for people of all ages to engage in learning and dialogue about climate risks in a novel way. Examples of climate risk explored through this initiative are the effects of forest fires and flooding on local landscapes, community, culture, health and wellness.”

WLMN along with TRI will begin to create dialogue about climate change and how the members of WLMN can ensure a stronger future.