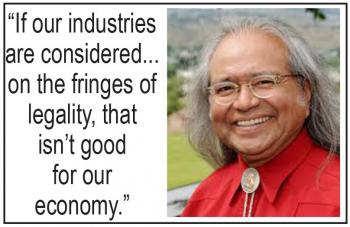 First Nations are “playing catch-up” when it comes to the cannabis industry.
By Shari Narine

First Nations are “playing catch-up” when it comes to the cannabis industry.

“This is an unfolding area of jurisdiction,” said Manny Jules, chief commissioner of the First Nations Taxation Commission, who is leading the charge to have First Nations get at least 75 per cent of the excise tax on cannabis sales on reserve. That is the same amount the provinces negotiated with the federal government in transfer payments.

As it stands, First Nations have been cut out of the taxation equation. It’s a situation Jules finds disturbing and contradictory as Prime Minister Justin Trudeau touted developing a new and important relationship with Indigenous peoples when he was elected.

“If our industries are considered that way, on the fringes of legality, that isn’t good for our economy. This has to be a legitimate part of our economic base because ultimately we’re dealing with billions of dollars. Cannabis is a multi-billion-dollar industry that’s going to be growing up and we need to be able to have a portion of that,” he said.

In May, Assembly of First Nations chiefs passed a resolution calling for the amendment of Bill C-45, which legalizes recreational cannabis, to “recognize that First Nations jurisdiction supersedes provincial legislation and regulation as it pertains to cannabis licensing, production, distribution and sales of legalized cannabis.”

It’s important for First Nations to have these discussions at the community level, says Jules, and that is why Indigenous cannabis and hemp conferences, like the one scheduled on the Tsuut’ina Nation next month in Alberta, are vital.

Aside from taxation, there are numerous issues First Nations must take into consideration when making the decision to get involved – or not get involved – in the cannabis industry, says Jules.

Legalizing Cannabis, a 12-page report produced by the Thunderbird Partnership Foundation, looked at harm reduction and the need for “more education and support to build capacity in First Nations communities and to support community health planning.” The report urges communities to consider if cannabis can be a “safer alternative” to opioid use without being promoted as “normalized.”

Health, education and treatment are reasons why First Nations need to have their own tax dollars so they can determine how best to spend them, says Jules.

To be successful in the cannabis industry, First Nations must have access to capital to build infrastructure and cover the costs of operations, which require large amounts of water and electricity.

This is where First Nations institutions come into play, says Jules. The tax commission would lobby for changes to the excise tax, while the First Nations Management Board would ensure transparency and accountability, which would attract outside investment on the reserve. The First Nations Finance Authority would “lever the revenue communities get and pool it” and invest it for high returns to further development. A re-instated First Nations Statistical Institute would track economic development along with social conditions and issues that need to be dealt with.

There is outside interest for investment on reserves, says Jules, who notes that the federal government has reserved about 20 per cent of licenses for First Nations.

Last week Health Canada issued a license under the Access to Cannabis for Medical Purposes Regulations to Seven Leaf Med, which is the first licensed producer located in a First Nations community, said department spokesman Andre Gagnon in an email.

Seven Leaf Med is located in the Akwesasne Mohawk Territory. Health Canada is currently considering 19 applications for licences by organizations that are either Indigenous-owned and operated, or have close Indigenous affiliations.

According to the 500 Nations website, the Siksika Nation has applied for a medical marijuana license with plans to build a $14.2 million 25,000 sq-ft processing facility. The Alberta Liquor and Gaming Commission lists a pending cannabis license application from Green Nations Naturals Inc. to operate a store in Maskwacis.

Meanwhile, Jules continues with his efforts.

“Now we’re having discussions with the Department of Finance over this fall and early winter hoping we can have this done by the next budget so there will be specific legislation to allow us to get the percentage of revenue that goes to the provincial governments and then a process to flesh out other areas of jurisdiction our communities are going to require,” he said.

Jules will be one of a number of speakers representing the medical, legal and business communities to present at the National Indigenous Cannabis and Hemp Conference to be held Nov. 18 to Nov. 21 at the Grey Eagle Resort and Casino on the Tsuut’ina Nation.