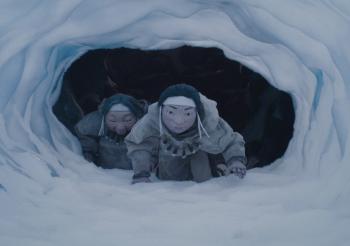 “It was illegal to drum dance or to sing our songs. Our priests told us that shamanism was the work of Satan, so we stopped talking about it.” —Zacharias Kunuk
By Sam Laskaris
Local Journalism Initiative Reporter
Windspeaker.com

Two decades after introducing his film Atanarjuat: The Fast Runner to the world, Inuk director Zacharias Kunuk has another movie earning accolades.

Angakusajaujuq: The Shaman’s Apprentice, Kunuk’s adaptation of an Inuit traditional story, was named the Best Canadian Short at the Toronto International Film Festival (TIFF), which concluded on Sept. 18 in Toronto.

International film journalists who are members of the Fédération Internationale de la Presse Cinématographique (FIPRESCI), had previously awarded Kunuk’s latest film the FIRPRESCI Award when it played at the Annecy International Animation Film Festival in France in July.

The latest recognition from TIFF, however, means Angakusajaujuq: The Shaman’s Apprentice is automatically qualified for consideration for an Oscar nomination.

Kunuk took the world by storm in 2001 when the Atanarjuat: The Fast Runner had its world premiere at the prestigious Cannes Film Festival.

The film, which won the Golden Camera Award at Cannes, was the first Canadian dramatic feature film written, directed and acted entirely in the Inuktitut language.

The film, which went on to capture awards at numerous festivals throughout the world, retells an Inuit legend passed down through centuries.

Atanarjuat: The Fast Runner had been scheduled to have its North American premiere at TIFF in 2001. But that showing was postponed following the 9/11 attacks in the United States.

Many years later, in 2015, Kunuk’s movie was chosen as the greatest Canadian film of all time in a poll of TIFF filmmakers and critics.

As for Angakusajaujuq: The Shaman’s Apprentice, like Kunuk’s breakthrough film, it involves a traditional Inuit story.

The film focuses on a young woman who is in training to become a shaman and is about to face her first test, taking a trip to the underground to visit Kannaaluk, The One Below. The journey takes place in order to determine why a community member has become sick.

The shaman-in-training discovers she must believe the teachings of her grandmother and mentor and to control her fears while encountering challenges and dark spirits.

Kunuk was born in Kapuiviit, which was part of the Northwest Territories but is now part of Nunavut.

He said Angakusajaujuq: The Shaman’s Apprentice is based on a story he heard from an Elder back in 1980. He was told how shamans would venture to the underworld in order to try and find out answers about a taboo that had been broken or how to heal those who were sick.

“In our traditional beliefs unexplained illnesses often came from broken taboos, when someone ate a piece of meat they were not allowed to, disrespected an animal or person, or broke a social rule,” Kunuk said. “This incredible story of journeying to the underworld has stayed in my mind ever since.”

Members of the TIFF awards jury who deemed Kunuk’s work as the Best Canadian Short at this year’s event released the following statement:

“Zacharias Kunuk’s Angakusajaujuq—The Shaman’s Apprentice is an enthralling stop-motion that encapsulates an array of textures, sound, and nuanced expressions that collectively invite you into the apprentice’s journey in learning traditional knowledge and caring for community while confronting your own fears. You can’t help but feel the questions asked of the apprentice are for us all to consider: Who are you? What have you learned?”

“We survived sustainably in this environment by passing on our traditions and knowledge through thousands of years of oral tradition,” he said. “But when Christianity came a hundred years ago, followed by forced settlement, residential schools and the colonial school system we have now, so much of these oral teachings stopped being told.

“It was illegal to drum dance or to sing our songs. Our priests told us that shamanism was the work of Satan, so we stopped talking about it. Many people still feel uncomfortable talking about this, but I think now things are starting to change. The world is changing.”

“They are all around us but most just can’t perceive them,” he said. “Every object or life form has a spirit and you have to respect them because they are as alive as us, and can harm you if you don’t.”

Kunuk also said he felt animation was the ideal medium for Angakusajaujuq : The Shaman’s Apprentice, a 20-minute film.

“The freedom of animation opens so many possibilities for telling these kinds of stories in the future because we have so many amazing stories waiting to be told,” he said.

“I see this short film simply as a tool to start talking about shamanism again, to invite Inuit, especially children and younger generations, to be proud of our rich spiritual traditions and feel comfortable to explore and ask questions about shamanism.”