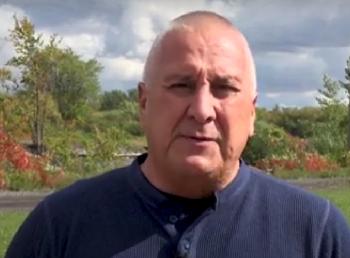 “I'm not putting targets or saying that is what's going to happen, but I know my community. I've served it on council for over 20 years and right now the sentiment in the community is not good.” — Michael Delisle, Jr., Mohawk Council of Kahnawà:ke
By Shari Narine
Local Journalism Initiative Reporter
Windspeaker.com

A “hot and uncomfortable summer” is brewing if Quebec’s French language Bill goes ahead without a “carve out” for all of the province’s First Nations, says former grand chief for the Mohawk Council of Kahnawà:ke.

“I believe this community after next Tuesday, if in fact the Bill (96) moves forward in its current state, will react, will act, and will continue to ramp up civil activities in and around the community,” said Michael Delisle, Jr., whose present position on the council includes economic development and external government relations.

Kahnawà:ke, one of several Mohawk Nations, is located 10 km south of Montreal on the bank of the St. Lawrence River. Members are Kanien'kéha and English speaking.

Last week, students and staff at the on-reserve high school of the Kahnawake Survival School were joined by hundreds of community members in protest of Bill 96, an Act respecting French, the official and common language of Quebec. They marched west along Route 132 to the green space near Mercier Bridge.

Another march is planned for Saturday where students and community members will spend eight hours handing out pamphlets in English and French to “every motorist that will be traversing the infrastructure that's in our territory to advise them of our problems and advise them … (that we’re) hopeful that they will pick up the phone and reach out to their respective MPs or to create the groundswell that we feel now at this point is necessary for Quebec to take us seriously,” said Delisle.

Route 132 and Mercier Bridge, he adds, are only two possible locations of more protests. He points out that other infrastructure exists, including the international waterways of the St. Lawrence Seaway, railways, CP rail bridge, highways, and municipal roads.

“I'm not putting targets or saying that is what's going to happen, but I know my community. I've served it on council for over 20 years and right now the sentiment in the community is not good,” he said.

Delisle says work by his council, as well as the Assembly of First Nations Quebec-Labrador and the First Nations Education Council, have gotten them nowhere with either Coalition Avenir Quebec (CAQ) French language minister Simon Jolin-Barrette or Indigenous Affairs minister Ian Lafreniere.

As far as the First Nation organizations are concerned, the Bill, with its push to strengthen the French language, will isolate First Nations populations in a variety of ways.

Both ministers, said Delisle, have brushed aside their concerns and proposed amendments saying “we're misinterpreting, that we're overstating, we're reading it wrong and we really truly don't understand the intent of the Bill.”

But Delisle points out that the Kahnawà:ke council’s legal department has advised that issues do exist.

The Bill will cut students off from qualifying for post-secondary schooling in the province. While the French language requirements won’t be implemented in on-reserve schools, students who want to attend publicly funded colleges will be required to pass French language classes.

As for economic development, it will be difficult to entice corporations to develop on-reserve or carry out business with on-reserve partners, as the Bill will heighten the requirements for all business, including contracts, to be undertaken in French.

“We feel because it's being imposed on (businesses and corporations) off reserve that everything must be in French, regardless of who they speak to…It's going to pose future roadblocks, hurdles for us to be able to engage with the outside business communities at fundamental levels. We view that as one issue in terms of affecting economy on reserve,” said Delisle.

In the area of social services and child welfare, it will become more costly to translate required documents into French for court hearings when contesting child placements.

There are also concerns about getting access to health services off-reserve when the language of communication is solely French.

The Quebec healthcare system has already come under fire for racism against Indigenous patients, brought to light in 2020 when Joyce Echaquan livestreamed on Facebook the cruel, racist treatment of her in a Joliette hospital leading up to her death.

Bill 96 issues were first flagged about a year ago and while some amendments were made to the Bill, there have not been enough changes to put First Nations at ease. The full impact is “yet to be determined,” says Delisle.

With that uncertainty, Delisle would like to see Legault’s government wait at least another week or two in order to continue talks with First Nations. The Bill, which is the only one on the order paper, is scheduled to be passed May 24, although the National Assembly won’t recess until June 10.

Quebec voters are scheduled to go to the polls Oct. 3. As far as Delisle is concerned Bill 96 is a move to gain support from the sovereigntist Parti Québécois faithful.

“They haven’t been successful in separation, if I can use that term. To me it looks like that’s what they’re leaning and weaving toward some time in the future. Whether it’s one year, 10 years, I don’t have a timeframe or a crystal ball. There’s method to the madness for sure. They’re playing a very strong difficult political card and right now they’re obviously sitting in the catbird seat being the provincial government of authority,” said Delisle.

Bill 96 is a human rights infraction, he says, adding these concerns have been taken to the federal government but has resulted in no action from the governing Liberals. Delisle is not hopeful for anything definitive.

So it comes down to the First Nations in Quebec and his community, he says.

“I'm glad that we're being told by the community what the action should be and how we need to act accordingly, politically, because that's how it should be. The people should be dictating to the politicians what our job is and how we move forward. But I see other things being contemplated, talked about and/or planned depending on how Quebec reacts or more importantly does not react,” said Delisle. “The community is aware and we will take direction from the community.”