It’s time: Chief calls for an ‘evolutionary jump’ in gender parity at AFN 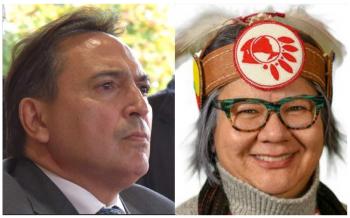 “We have had very difficult moments in our executive and that’s why this resolution is coming forward. Because there are problems within the AFN that need to be fixed.” — Ontario Regional Chief RoseAnne Archibald
By Shari Narine
Local Journalism Initiative Reporter
Windspeaker.com

A woman chief who spoke passionately at the Assembly of First Nations virtual annual general assembly on Dec. 9 on a resolution for gender and sexual-orientation equity within the AFN has already begun to experience the backlash of her actions.

“Shortly after my comments were broadcast, a male Chief in British Columbia wrote me a negative email. I will hold onto these emails and compile them to show the truth of what can happen to women leaders who speak out and ask for change,” wrote Ontario Regional Chief RoseAnne Archibald in an open letter dated Dec. 11.

Two days before, a resolution for the AFN to become a role model in ending sexual orientation and gender-based discrimination within the organization passed with a vote of 78 per cent in favor. The number of chiefs voting was not made known.

Archibald is one of three women regional chiefs for the AFN. She is joined by Kluane Adamek in the Yukon, and Marlene Poitras in Alberta.

Archibald’s comments, both in her letter and during the debate, are not unique.

Cheryl Casimer, who recently lost her bid to unseat Terry Teegee as regional chief in BC, told Windspeaker.com during her campaign in November that trying to get gender equity policy “on the table for discussion is a challenge, and why is it I don't know. The Women’s Council came up with the declaration calling on chiefs to support women in community and in leadership and yet at the national table they can't even have a gender equality policy accepted. It gets challenged. I don't know why. It doesn't make any sense.”

At that time, Windspeaker.com reached out to Chief Connie Big Eagle, chair of the Women’s Council, to speak on the issues raised by Casimer. Big Eagle did not respond.

While Casimer, who attended as proxy for the chief of Osoyoos Indian Band, spoke in favour of the resolution, Big Eagle did not.

“I want to acknowledge that AFN is not perfect and we must all work towards improvement and who can argue with such a wonderful vision and dream and concept for our national organization?  My issue is with the approach,” said Big Eagle.

Big Eagle expressed concern that the Women’s Council had not been consulted on the resolution, which calls for the council to appoint one of three external experts to a panel tasked with overseeing an investigative review of the AFN “to end sexual orientation and gender-based discrimination and all other forms of violence, including sexualized violence, lateral-violence, bullying and cyber-bullying in the organization.” The Knowledge Keepers Council and Youth Council are also to appoint one expert each to the panel.

Big Eagle requested the removal of clauses that required the direct involvement of the Women’s Council and the other two councils.

She also pushed for the word “investigative” to be changed to “review.”

Neither change was acceptable to Khelsilem of the Squamish Nation and Kwanlin Dun First Nation Chief Doris Bill, who introduced the resolution.

Also brought into question was whether such a resolution was “out of order” regarding the AFN’s charter, which is presently under review.

In Wuttke’s legal opinion, the proposed mandate of the resolution was not contrary to the AFN’s charter, but it was “somewhat problematic.” He said the resolution lacked clarification on a number of points, including the qualifications of the three-member panel; how specific incidences were to be investigated; protection of personal privacy; and provided limited direction on the range of sanctions.

“It should be noted that the AFN charter is silent on the conduct and culpabilities of many individuals within the organizations and this resolution attempts to incorporate that into AFN processes,” said Wuttke.

Eskasoni First Nation Chief Leroy Denny noted that National Chief Perry Bellegarde had instituted a Code of Conduct for the executive. He listed measures that Bellegarde had undertaken, including launching an investigation when AFN received a gender complaint against two prior chiefs, appointed a woman CEO for AFN, and fought for the National Inquiry into Murdered and Missing Indigenous Women and Girls.

“The investigation should be characterized as a review,” said Denny, who supported the resolution.

Archibald did not share Denny’s glowing assessment of Bellegarde’s actions.

Archibald accused Bellegarde of supplying “speaking notes” to those who spoke to the resolution, many of whom wanted to move away from investigations.

“It has to be an investigation not an evaluation. We have problems in the Assembly of First Nations. We have problems and I want to start to tell you about them, that women are not always respected especially on the executive.  We have had very difficult moments in our executive and that’s why this resolution is coming forward. Because there are problems within the AFN that need to be fixed. In order to fix something, you must look for it. You must bring it into the light,” said Archibald.

Bellegarde was the last person to speak on the resolution and his comments followed Archibald’s.

He said he supported the resolution and encouraged chiefs to do the same.

“There’s no question we have to make our AFN better than it is and … we’re going to keep doing those things to make our AFN the most effective and efficient organization, respectful of male and female and transgender and all of the above because we need to work together,” Bellegarde said.

He asked Khelsilem and Bill for “some friendly amendments” as requested earlier by some chiefs in order to “fix it so we can operationalize it.”

Khelsilem and Bill refused to amend the resolution.

In her open letter, Archibald wrote “We know that we have a choice to continue to enforce the colonial system on ourselves and others, or whether we reject it and deconstruct harmful elements to build the world we want to live in. I believe the global pandemic has given us an opportunity to make an evolutionary jump.”

She concluded the letter with “I look forward to our collective journey toward healing and will share more of my stories when the Investigative Review gets under way.”

The Dec. 11 open letter from Ontario Regional Chief RoseAnne Archibald is published below. 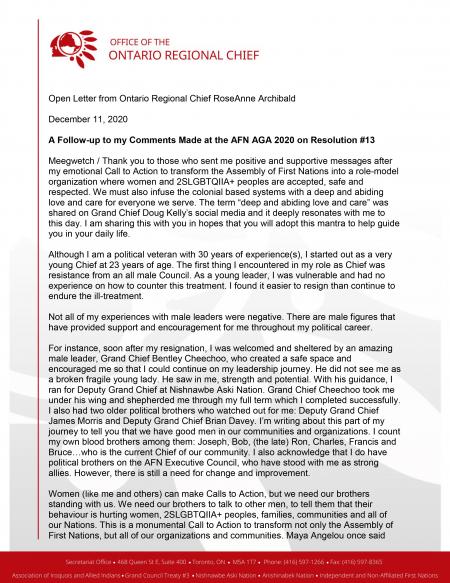 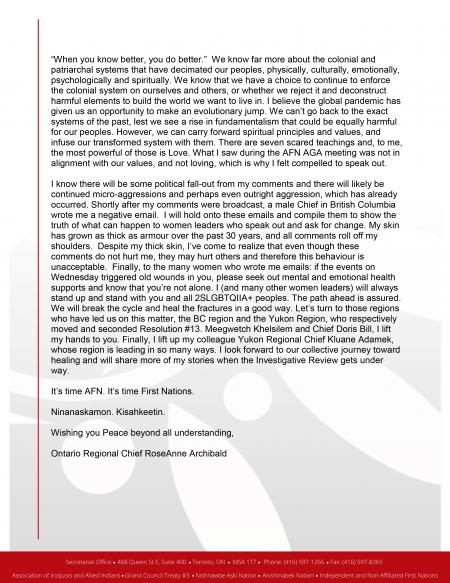