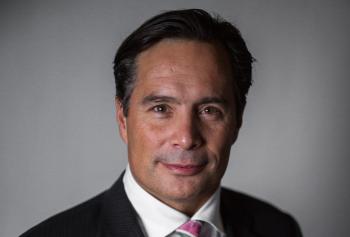 Keith Henry, president and CEO of the Indigenous Tourism Association of Canada

“All the work that we did to advocate for the Indigenous tourism industry, it’s not being done anywhere else in the world.” — Keith Henry, president and CEO of the Indigenous Tourism Association of Canada
By Sam Laskaris
Local Journalism Initiative Reporter
Windspeaker.com

Having the spotlight on him is not something Keith Henry enjoys.

But he will gladly accept the latest recognition being thrust upon him because he believes the Indigenous tourism industry throughout the country will benefit.

Henry, who is Métis and lives in Vancouver, is the president and CEO of the Indigenous Tourism Association of Canada (ITAC).

It was announced this past week that Henry is one of seven recipients in the world who will be receiving 2021 Global Vision Awards.

These accolades are annually bestowed by Travel + Leisure, a prestigious magazine based in New York City that has an estimated 4.8 million readers.

Those chosen for these awards are people making sustainability and social justice a priority in science, wine, tourism and beyond.

“I’m not really one for awards,” Henry said. “I get embarrassed and sheepish about it. It’s a bit awkward for me.”

Henry though recognizes that winning his Global Vision Award will bring more attention to his work.

“It brings a lot of recognition for ITAC and for the Indigenous tourism industry,” he said. Henry believes his co-workers also deserve their share of praise.

“I know the work I do is because of the team I have with me,” he said.

The six others recipients of Global Vision Awards this year are:

“They are well-known, iconic people,” Henry said. “I just know of them.”

Henry said he has never met any of the other award winners, but is familiar with their work.

“I hear about these people,” he added. “To see myself among their names, that’s extremely humbling for me.”

Henry said he was surprised to hear representatives from Travel + Leisure, a monthly, were keeping tabs on his efforts.

Award recipients are also recognized for making moves to protect environments and communities around the world.

Henry said he has no idea who suggested to Travel + Leisure representatives to look into the work he was doing.

“It came out of the blue,” said Henry, who is also the president and CEO of the BC Métis Federation. “I have no idea who nominated me.”

Henry said he was also stunned to receive word earlier this month of another accolade. He was notified that he has been inducted into Canada’s Marketing, Advertising, PR and Communications Hall of Fame.

These hall of fame inductions are announced annually by the publication Marketing News Canada.

Henry also said the two accolades he earned this month are among the best he has received.

“These are definitely highlights of my career because I didn’t know they were coming,” he said.

Henry said he was told he was being recognized with his Global Vision Award because of ITAC’s efforts during the past several years as they helped countless Indigenous tourism operators from across the country grow their businesses.

ITAC officials also worked tirelessly this past year during the COVID-19 pandemic to try and get some financial assistance to Indigenous tourism businesses. Many of these businesses were forced to close their doors—some of them losing their entire 2020 seasons—because of the pandemic.

Thanks to more than $16 million in federal funding, ITAC was able to divide up that money and spread it out to about 680 Indigenous tourism operators in the hopes their businesses could stay afloat.

These businesses received up to a maximum of $25,000 each in federal funding.

Henry said Travel + Leisure reps were aware of the extensive work ITAC had done to secure this funding.

“That was also seen as a big difference maker,” he said.

Henry added ITAC is believed to be the only national association that has been specifically trying to assist Indigenous tourism businesses in its country during the pandemic.

“All the work that we did to advocate for the Indigenous tourism industry, it’s not being done anywhere else in the world,” he said.