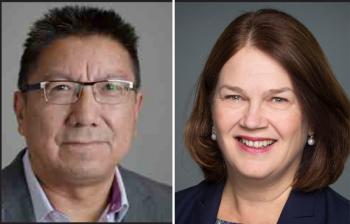 Jane Philpott will have to ‘cool off,’ according to a federal ethics law, so working for remuneration for the Nishnawbe Aski Nation, as planned and announced, is a no go.

Philpott was to take on the role of special health adviser to NAN. But the Conflict of Interest Act says former ministers must take a two-year ‘cooling off period’ from working, contracting or serving as a board member with any group or organization they had direct or significant dealings with during their last year as minister.

Philpott served both as Health minister and Indigenous Services minister, so her contact with NAN as a minister was considerable.

So, she intends to volunteer with NAN instead, according to a CBC report.

Philpott had asked the ethics commissioner to waive or shorten the cooling off period, based on the circumstances, which is within his options, but that request was refused.

Volunteering with NAN allows her to continue with 49-First Nation organization and not worry about conflict of interest.

Philpott quit Cabinet as Treasury Board president in March of this year over Prime Minister Justin Trudeau’s handling of the SNC-Lavalin criminal case, saying she had lost confidence and could no longer sit in Cabinet.

The Nishnawbe Aski Nation will be continuing its relationship with former Liberal minister Jane Philpott.

Philpott is in the process of taking on the role of health advisor for the political organization that represents 49 communities in northern Ontario.

“It was natural for myself to speak with her because of how well we worked together when she was a minister, whether it was (Indigenous Services) or health. It was just the level of commitment that she showed to our communities to improve quality of life in our communities,” said NAN Grand Chief Alvin Fiddler.

“It was just a no-brainer for us to approach her and asking her to support us.”

Prime Minister Justin Trudeau appointed Philpott as health minister when he came to power in his first term in 2015. In 2017, she was shuffled to Indigenous Services minister in that newly-created portfolio. In 2019, she left that ministry to become president of the Treasury Board. However, two months later, she resigned from Cabinet unhappy with how her government had handled the SNC-Lavalin affair and in support of Jody Wilson-Raybould, who resigned from Cabinet over what she alleged was government interference in the prosecution of the SNC-Lavalin in a corruption case.

Philpott was also the federal government signatory to a tripartite accord with NAN and Ontario in 2017 to address health systems transformation in NAN communities.

“Just recognizing that we need to first of all dismantle, in this case, the health system and then rebuild the new one that will actually factor in or include the needs of our communities, (address) the gaps that are there now and move towards more of a wellness system as opposed to … where we are now,” said Fiddler, who says colonial systems were not designed to address First Nations’ needs.

To that end, over the past two years, the groundwork has been laid by Ovide Mercredi, who is leading NAN’s work with the governments of Canada and Ontario. Mercredi, the former national chief of the Assembly of First Nations, and his team have been undertaking engagement sessions in the communities to gain an understanding of the health services that are needed.  This understanding will inform the discussions and negotiations with the federal and provincial governments.

Philpott will be advising Mercredi’s team.

“We’re not just looking at one specific project. We’re looking at the transformation of the whole system. So it’s going to be all kinds of different pieces and parts to it and I think (Philpott), with her background and her expertise, it’ll be helpful to us for her to provide advice on … the overall package as opposed to one-off projects,” said Fiddler.

Fiddler says health transformation may also include building one or two hospitals in NAN territory.

“We’re looking at almost like a virtual hospital. The possibilities are greater now with the infrastructure that’s been done around broadband in NAN territory, actual hardware on the ground,” he said.  “So we’re excited that (Philpott) would be in a unique position to help us advise what this would look like or what it should look like.”

Philpott announced she would be working with NAN in a tweet on Nov. 22, saying she was “delighted to be invited” to “support the critical work of health transformation.” She also acknowledged the “amazing progress” of the work Mercredi had already begun.

In an interview on CBC Radio’s Metro Morning Nov. 25, Philpott said she would be helping to address some of the roadblocks facing NAN in attracting and retaining health professionals, who can both provide reliable services and understand the communities.

Philpott acknowledged the situation was dire in some of the communities, where there were “long stretches of time” without a healthcare provider in the community, meaning people needed to be airlifted to receive medical treatment. Thirty-two of NAN’s 49 communities are remote and isolated.

“The long-term effects are enormous,” said Philpott, as complications arise from lack of early preventive measures, families are separated, and medivacs are costly.

“These are the kinds of things that can be dramatically changed if communities can build their own health work force and the long-term solutions really are building that health work force from within,” she said.

Philpott said she is bringing her experience as a politician and a physician to the new position.

“I’m a big believer in the need for strengthening health at the population level and while obviously doing it at the patient one-on-one level is incredibly important … I feel like the experiences I have had have put me in the position where I would like to work in an area that I can have a big impact on population health,” she told Steve Paikin on The Agenda on TVO.org.

“She wants to visit the communities, which I think is going be a very important aspect to her work,” said Fiddler. That is the “same level of commitment she showed our communities when she was a minister.”

Philpott’s contract is still being finalized, he adds, with her initial work to carry through until the end of March 2020.

“But I’m hoping it will go way beyond that,” said Fiddler.

Fiddler doesn’t anticipate any complications with having Philpott on board and NAN working with the federal Liberals despite Philpott’s ousting from caucus.