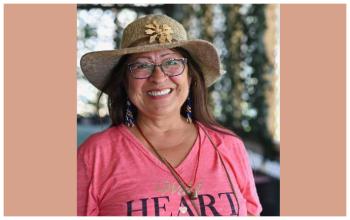 “We have a beautiful, beautiful team. A lot of people on the committee with a lot of experience and I think we couldn’t have a better team on this.” — Dorene Bernard
By Shari Narine
Local Journalism Initiative Reporter
Windspeaker.com

Nearly seven years after the Truth and Reconciliation Commission on the legacy of Indian residential schools issued its 94 calls to action, a survivor-led steering committee has been established to make call number 81 happen: a national monument in Ottawa “to honour Survivors and all the children who were lost to their families and communities.”

However, it might not be until the 10-year mark that the commemoration monument is erected.

“It’s a few-year project,” said committee member Dorene Bernard. “They are cognizant of the age and demographic of survivors and those things, so it may be expedited in some areas. Things may get done faster, but realistically how the wheels turn in Ottawa….”

Bernard was one of 16 committee members appointed last week. They are tasked with overseeing the monument project as well as providing advice and guidance on site selection, the design competition process, and the development of educational content and on-site programming.

In August 2021, the federal government announced $20 million to build the national monument.

The first of two days of virtual meetings were held yesterday. The first in-person meeting will occur at the end of June.

“I’m really pleased that it’s moving along. There’s many of the other calls to action that haven’t been actioned at all,” said Bernard, a Mi'kmaki who attended the Shubenacadie Indian Residential School for four years.

Bernard said she put her name forward in a letter to the National Centre for Truth and Reconciliation (NCTR), which managed the nominations for the committee. Members were also chosen through a public nomination process.

“The Atlantic region is one school and it represents students from Nova Scotia, New Brunswick, Prince Edward Island and the Gaspe region of Quebec. We needed representation for our residential school, for our people. It’s very important that somebody’s there to represent such a large region,” said Bernard.

It’s also important, she says, that the national monument “reflects what the survivors want and it reflects not only the experience of residential school, but also our resilience and our strength as well.”

Bernard says she feels the importance of the work the group is undertaking.

“There’s a lot of work to do. We have a beautiful, beautiful team. A lot of people on the committee with a lot of experience and I think we couldn’t have a better team on this,” she said.

However, Bernard also emphasized the need to continue with regional and provincial monuments. Of 30 communities in the Atlantic, 12 have commemoration monuments honouring survivors.

“We need commemorations in all our regions, even in our communities. This was part of the settlement agreement, communities as well as regional, provincial. Those need to be up as well…because there’s probably a better chance of survivors seeing a provincial commemoration than getting to Ottawa to see the national, but we’re hopeful it will be done,” said Bernard.

Call to action 82 calls upon the provinces and territories to commission and install “highly visible” monuments in their capital cities.

Bernard has a strong track record of getting things done, working on regional commemorations and documenting the history of Shubenacadie Indian Residential School, which was funded by the federal government and operated by the Catholic Church.

On the first annual National Day for Truth and Reconciliation, Sept. 30, 2021, a plaque was unveiled marking the Shubenacadie Indian Residential School in Nova Scotia as a National Historic Site. The designation came a year earlier. No structures for the school, which operated from 1930-1967, remain standing and Bernard said a monument commemorating that school will be erected nearby.

“That’s the most pressing issue right now is to get that done because survivors come from all over the Atlantic region to that site. It’s really important that it’s done,” she said.

Bernard’s parents attended that school, her mother for seven years, her father for 11 years. Her grandmother also went as did her aunts, uncles and cousins.

“The Residential Schools National Monument to be installed in Ottawa as a highly visible and publicly accessible commemoration will provide a place to express grief, and to heal and learn,” said Canadian Heritage Minister Pablo Rodriguez, when he announced the steering committee.