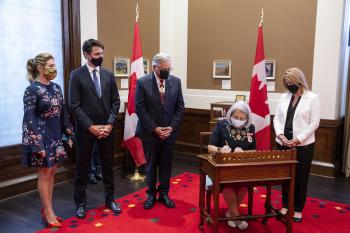 Mary Simon was installed today as the 30th Governor General of Canada, an Inuk woman and the first ever Indigenous person to hold the position.

“This is a diverse place and so we need people like Ms. Simon because we need people who build bridges and bring us together.” — Prime Minister Justin Trudeau
By Shari Narine
Local Journalism Initiative Reporter
Windspeaker.com

Indigenous culture and Inuktitut were highlighted in the installation ceremony this morning in Ottawa for Inuk leader Mary Simon, now officially the 30th Governor General of Canada.

“To meet this moment as Governor General I will strive to hold together the tension of the past with the promise of the future in a wise and thoughtful way,” said Simon.

“Our society must recognize together our moments of regret alongside those that give us pride because it creates space for healing, acceptance and the rebuilding of trust. I will strive to build bridges across the diverse backgrounds and cultures that reflect our great country's uniqueness and promise.”

Bridge builder was also a characteristic Prime Minister Justin Trudeau attributed to Simon as he spoke about the new Governor General, who is also the first Indigenous person to serve in this position.

“We are a country of vast Arctic spaces and busy city skylines, of prairies and coasts, of French and English and of Indigenous languages. This is a big place. This is a diverse place and so we need people like Ms. Simon because we need people who build bridges and bring us together,” Trudeau said.

Simon also stressed diversity, pointing out that it is the mix of culture and heritage that makes Canada “a beacon to the world.”

“At this point in our shared history it is clear that many languages are part of the fabric of our nation as are the stories of those who come to Canada in search of a new life,” she said in a 20-minute speech that was punctuated with more Inuktitut than French.

Shortly after being announced as Governor-General designate, Simon’s inability to converse in fluent French resulted in hundreds of complaints to the Office of the Commissioner of Official Languages. As a result, an investigation has been launched into the process for nominating the governor general. Simon is fluent in both English and Inuktitut.

In her address, Simon said she had heard from many Canadians who supported her commitment to learn French and others who offered to help her.

Simon, who in 1994 was appointed as Canada’s first ambassador for circumpolar affairs, spoke about the impact of climate change and the warming of the planet, drawing attention to forest fires, heat waves and prolonged draughts in the past few months.

“I believe that in order to have a healthy future we must reset our thinking to understand that nature contains and creates our climate. Our climate allows society to be possible and within our society is our economy,” said Simon.

“As Governor General I will promote and recognize leading examples of community- and Indigenous-driven conservation and of climate action that are making a real difference and can inspire other Canadians to do the same.”

Simon committed to addressing mental health and wellness, something for which she has long been an advocate. She said she would work on destigmatizing mental health so it is accepted the same way physical ailments are.

Simon lauded essential workers for their services through the coronavirus pandemic.

Because of COVID-19 safety protocols, the guest list for the event was limited, but did include President Natan Obed of the Inuit Tapiriit Kanatami, Regional Chief RoseAnne Archibald of the Assembly of First Nations, and Manitoba Metis Federation President David Chartrand.

Speaking before the event, Obed, who was a member of the advisory committee for the selection of the new governor general, said Simon stood out because she had led an “incredible life.”

“The reality is that she can do that role as an Indigenous person and she does it as an individual. She is not representing Inuit as Governor General. She is an Inuk who has decided to let her name stand and decided to accept this particular role and I think that’s just a huge step forward for Canada,” said Obed.

“Today is a proud day for the Indigenous community, with a prominent Inuk leader and advocate taking such a high-profile position in our country,” said Chartrand in a written statement after the ceremony. “Clearly, this signals a further step on the path toward reconciliation, with the Indigenous peoples of Canada starting to find our rightful place in confederation.”

Before the ceremony, the Qulliq was lit by Inuit Elder Sally Webster. Simon was drummed in and out of the ceremony by Inuit Elder David Serkoak. Before she entered the hall, she and Trudeau and their partners were welcomed by the drum group the Ottawa River Singers. Algonquin Elder Claudette Commanda delivered the opening welcome. Music at the ceremony included songs performed by Inuit and Métis singers.

Simon’s installation was broadcast on Uvagut TV in Inuktitut, with commentary and insight provided by Inuk actor and executive director for Nunavut Independent Television Network Lucy Tulugarjuk. Along with including Inuktitut subtitles in its main broadcast, CBC offered an Inuktitut broadcast of the installation on CBC Nunavut Facebook.