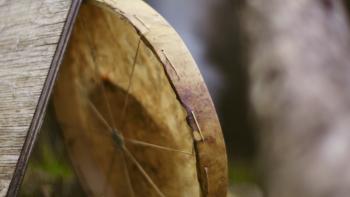 Photo still from the film Heartbeat of a Nation, which will debut at the Calgary International Film Festival Sept. 24. Photo courtesy of the National Film Board of Canada, 2022.

“It’s great that we’re in these positions of power now where we can tell these stories, but there also needs to be a balance of who’s working with us as well.” — Chipewyan Prairie Dene First Nation filmmaker Eric Janvier
By Shari Narine
Local Journalism Initiative Reporter
Windspeaker.com

Update: Heartbeat of a Nation is now available for viewing at the NFB at https://www.nfb.ca/film/heartbeat-of-a-nation/

A “happy little accident” has resulted in a short film that will make its world premiere for Chipewyan Prairie Dene First Nation filmmaker Eric Janvier at the Calgary International Film Festival this weekend.

“But then obviously COVID happened and then it became this happy little accident that it got smaller and more intimate. It ended up being something so much better than I had envisioned.”

Heartbeat of a Nation captures the personal and loving interactions between father, child and aunty. Brant Janvier instructs his child August on how to make a caribou drum as they work together to stretch the hide over a wooden rim and sew it on with sinew. As they do this work Aunty Agnes Duke, whose land the film is shot on in northeastern Alberta, silently observes.

“We did not intend for (Agnes) to actually be a part of the documentary. She was there. She was in the background cleaning some medicines. Once (Brant and August) were done the drums, she just decided to speak and my camera crew got it all. That was all just what she was feeling as she was watching it happening,” said Janvier.

Agnes speaks emotionally about how happy she is and thankful that after 30 years of caring for the drums by rubbing them down with blueberry juice and talking to them, now Brant is caring for them and passing the traditions and the drum songs down to his child.

“I’m not a big documentary filmmaker but it’s those little moments that really make me appreciate the work of documentary filmmakers and how they can just capture something so quickly and so spontaneous that it works in the grand scheme of the story. For me to be able to capture that moment on camera, coming from a place that was so important to our family was just, to me, was a great moment for all of us involved,” said Janvier.

Heartbeat of a Nation is produced by the National Film Board (NFB) of Canada. Janvier says he has always wanted to work with the NFB and Cree/Métis producer Coty Savard.

“I can’t remember where this idea came about. I think it was a conversation with a community member and then I started thinking, if I’m going to tell a story, a documentary, then I need it to be personal to me and it has to be something I care about and that’s how I ended up pitching that idea to the NFB,” he said.

Drumming, like much of First Nations culture, was lost through colonization and Indian residential schools, even in remote communities, says Janvier.

While there are people in the community who drum, they use moose hide or deer hide to make their drums and not caribou hide.

At a Dene cultural event about a decade ago, said Janvier, “we started drumming with this group from northwest Alberta and then that’s how we ended up getting involved with the drum and it kind of fell on our family to start doing it.”

Heartbeat of a Nation runs 20 minutes, but anywhere from 30 to 40 hours of footage was shot. The film opens with Brant removing the caribou hide from the river where he has soaked it. That scene was shot four or five times, says Eric. The process of making the drum took about four hours of shooting. The film ends with Brant and August beating their drums and singing. The singing was shot about five times.

“The original cut we had was 45 minutes. So there was a lot that got left on the cutting room floor,” said Janvier. “It’s really interesting when you look at how much is filmed for even a short film. There’s a lot that just goes in making a short film. Take that, a feature-length film, how much footage is being shot.”

Janvier says Heartbeat of a Nation is an important film for both Indigenous and non-Indigenous audiences.

For Indigenous audiences, especially the younger generations, he hopes they realize it’s never too late to connect to and reclaim their culture. He also wants them to understand that if they can’t workshop with a community Elder, “documentaries or short films or feature films are a great opportunity” to learn.

Janvier is no stranger to short films or film festivals.

Janvier’s most successful film to date is God’s Acre, which he produced in 2015. The 15-minute film stars Sucker Creek First Nation actor Lorne Cardinal of Corner Gas fame. God’s Acre debuted at the Toronto International Film Festival and went on to play in Australia, New Zealand and a couple film festivals in the United States.

Janvier started in the industry more than 15 years ago. He began as a producer, although his interest was in becoming a director. But in the past decade, he has pursued writing “more seriously” and classifies himself as a writer first, then producer and finally director.

He has worked on both Indigenous and non-Indigenous productions. One of his more high-profile accomplishments is an advertising campaign with Marvel and Disney for the movie Avengers: Endgame on a California set.

“Being an Indigenous kid from northern Alberta working on (this). It wasn’t a big set, but still we got to work with actors from the Avengers. To me that was an amazing experience,” said Janvier.

Over the years more and more Indigenous people have made their names as writers, notes Janvier, but Indigenous representation is lacking in other areas when it comes to the film industry.

“I’ve had that opportunity to work on productions that are led by Indigenous creators and filmmakers but also not being crewed by Indigenous (workers). There’s walking that tightrope there,” said Janvier.

“It’s great that we’re in these positions of power now where we can tell these stories, but there also needs to be a balance of who’s working with us as well.”

Janvier, who lives in Edmonton, will visit the Calgary International Film Festival on Sept. 24 when Heartbeat of a Nation debuts.

Eventually, the film will be offered for free streaming on the National Film Board of Canada’s streaming platform nfb.ca as one of more than 400 works of Indigenous cinema.