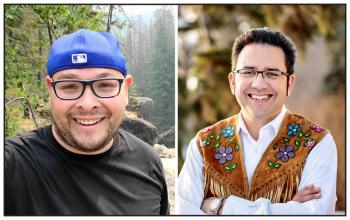 New writer Scott Olsen took part in the 2021 Audible Indigenous Writers’ Circle and established writer Richard Van Camp is returning this year as a mentor for the program. Photo by William Au

“Our students reminded us why we publish and why we write.” —Richard Van Camp
By Sam Laskaris
Local Journalism Initiative Reporter
Windspeaker.com

Emerging Indigenous writers have until the end of this month to apply for a mentorship writing program that earned rave reviews for its launch in 2021.

A total of 21 individuals will be accepted into the second year of the Audible Indigenous Writers’ Circle.

First Nations, Métis and Inuit writers have until May 31 to apply for the six-month program. As was the case a year ago, Indigenous mentors, seven of them this time around, are being brought on board to help guide program participants with their creative works.

Richard Van Camp, an Edmonton-based Tłı̨chǫ Dene storyteller and best-selling author who has written 26 books, will serve as a mentor for program for the second straight year.

Van Camp said he’s thrilled he was invited to take part once again.

“I would have been (upset) if they had not asked me to,” he said.

Van Camp served as the primary mentor for four writers in last year’s program. Two of those individuals were from Alberta, one from British Columbia and the other was from Newfoundland.

Van Camp also had opportunities to view the works of others in the program as well.

“It was a dream come true for all of us,” he said. “Audible and Yulu really gave us an island for six months to support each other and cheerlead. It was a real privilege to be a part of it. For six months they made it easy to connect, have fun and celebrate each other.” Yulu is a social and environmental impact communications firm, and Audible is a company by Amazon that provides audio entertainment.

Van Camp said he was pleased to be a part of a Facebook group that was created for the program. He also had the ability to exchange emails with others. Plus he was able to offer advice or simply read what others had to say via the comments sections on a YouTube channel that was created to showcase the works of those in the program.

Van Camp welcomed the chance to keep in constant touch with other Indigenous writers throughout the program, which began in June and continued until December 2021.

“Everyone was craving that during the second year of the pandemic,” he said.

There is no registration fee for those writers selected to be part of the program. And all 21 writers that are chosen to participate will be eligible for a $1,500 bursary.

Indigenous writers from across the country are encouraged to apply for the program. It should be noted, however, that due to provincial contest regulations, those from Quebec are not eligible to take part.

Applicants must live in Canada and be at least 18 years old. They must also submit a sample of their work with their application.

A panel of Indigenous literary artists will pick those that will participate.

Scott Olsen, who is a high school teacher in a suburb outside Edmonton, was one of the 2021 program participants.

He got a lot more than he bargained for out of the program.

“For me I think the validation and the accreditation was everything,” said Olsen, who early on in his literary career had been told that he wasn’t a good writer.

But those involved in last year’s program, including Van Camp, are rather impressed with Olsen’s way with words.

“I was absolutely shocked,” Olsen said of the fact others liked his writing.

Olsen wrote a varying number of chapters each month during the program. And earlier this year he completed a 16-chapter, 360-page manuscript about his life titled Concrete Indian.

Since many, including Van Camp, are praising his work, Olsen is hoping a bit of a battle among publishing houses will be created in an effort to get his book out to the world.

Olsen isn’t the only one who benefitted from the 2021 Audible Indigenous Writers’ Circle. Other writers in the program now have literary agents, are involved in discussions with publishers and have had the work they created shortlisted for various competitions.

Van Camp said the program reinforced the point to him that he is in a position that other Indigenous writers aspire to be in.

“Our students reminded us why we publish and why we write,” he said.

Detailed information on the Audible Indigenous Writers’ Circle is available at https://www.audible.ca/ep/IWC