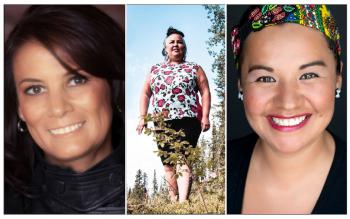 “For too long our economy has been dependent on resource extraction. And as I see my company growing and being able to employ and provide meaningful skills to people who want to create products made with gifts from the land, I want to create a safe and cultural space in our community.” — Joella Hogan
By Sam Laskaris
Local Journalism Initiative Reporter
Windspeaker.com

They have diverse careers and live in different parts of the country.

But Beverley O’Neil, Joella Hogan and Cezin Nottaway were brought together this week to offer their thoughts about being Indigenous women entrepreneurs.

The three women were on Wednesday’s Women In Business panel, part of this year’s Cando Conference, which for the first time in its 27-year history was held virtually because of the pandemic.

The conference, organized by Cando, a national organization that promotes economic development and capacity building in Indigenous communities across Canada, began on Tuesday Oct. 20 and continued yesterday.

The conference will resume next Tuesday and Wednesday.

O’Neil, a member of Ktunaxa Nation in British Columbia, started her own business, O’Neil Marketing and Consulting, back in 1994. The following year she launched a second company, Numa Communications.

O’Neill said it is possible to thrive and be a successful Indigenous business owner despite some obvious obstacles.

O’Neil believes that Indigenous people, and women in particular, can enjoy business success, especially if they have the right frame of mind. She believes it is vital to incorporate the Indigenous philosophy of looking forward seven generations.

“You don’t plan to only achieve what you can in the next six months or the next five years,” O’Neil said. “We have to look to plan to achieve way beyond, so that what you leave is a legacy and it is a responsibility itself.”

Hogan, a member of Na-Cho Nyak Dun First Nation in Mayo, Yukon, entered the business world in 2012 when she bought an established soap company.

She has since renamed that business, which is now called the Yukon Soaps Company.

Prior to the pandemic she primarily sold her products to those in the Yukon, but Hogan has shifted her business and the majority of her sales are now online across North America.

Hogan is keen to become a difference maker with her business.

“I also hope to be a part of an economic shift in my traditional territory,” she said. “For too long our economy has been dependent on resource extraction. And as I see my company growing and being able to employ and provide meaningful skills to people who want to create products made with gifts from the land, I want to create a safe and cultural space in our community.”

Hogan said she is frequently asked to provide advice to young people or new entrepreneurs.

“Root your business with your values, but don’t be afraid of making money as one of your values,” she said. “Make sure that’s at the top. Our communities are circular and regenerative and based on concepts of sharing and gifting. And although that may look different now, we need money to survive to grow our business and feed our family.”

Nottaway is certainly one individual who knows how to feed people. For the past nine years, Nottaway, who is Algonquin, has operated her business, Wawatay Catering.

She’s run the company, which specializes in Anishinaabe cuisine and was inspired by her grandmothers’ recipes, from her home in Kitigan Zibi Anishinabeg, a First Nation in Quebec. The majority of Nottaway’s business was, prior to the pandemic, for clients in Ottawa, about a 90-minute drive from her home.

During Wednesday’s conference, Nottaway admitted her route to become a chef and successful businesswoman was not always easy.

She had enrolled in the chef training and culinary management program at Ottawa’s Algonquin College. She initially struggled with her studies because of her alcohol and drug abuse.

She became pregnant and quit school, but eventually returned.

“The reason I went back was because I was in charge of a little human now,” Nottaway said. “And I wanted him to know that education is very important.”

Nottaway believes there is nothing wrong with celebrating Indigenous achievements.

“I don’t want to feel boastful,” she said. “I’m not bragging, but I just want people to know it’s okay to be proud of what you’ve accomplished because we as Anishinaabe people have been oppressed for so long that we can’t really express our pride.”

As for Nottaway, having experienced success in her business means she can now also afford to assist others.

She’s proud to be a member of the Indigenous Culinary of Associated Nations (ICAN), a group whose mission it is to connect, influence and share Indigenous food experiences through various communities.

“For me the reason why I joined it is because I feel like I’ve gotten to a place, and even beyond, with my career and the success I’ve gained through everyone helping me, so with ICAN I want to be able to give back,” Nottaway said. “That’s very important to me.”