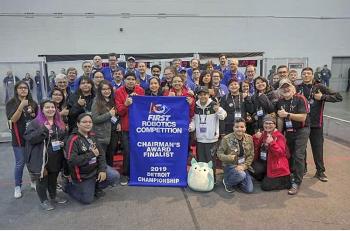 “I think we can be a group of Indigenous people who believe in other Indigenous people.” —Aaryn Zoccole, a Grade 11 student on the Wikwemikong team
By Sam Laskaris
Windspeaker Contributor
WIIKWEMKOONG UNCEDED TERRITORY

A group of teenagers from the Wiikwemkoong Unceded Territory on Manitoulin Island in Ontario have made history. And now the members of the robotics team from Wikwemikong High School are hoping they can provide inspiration to other Indigenous youth across the country.

The school’s robotics squad, which consists of 18 students, competed at the world’s FIRST Robotics Competition, which concluded this past Saturday in Detroit.

The global competition, which is the largest celebration of STEM (Science, Technology, Engineering, Mathematics) students, has been held annually since 1989.

But this marked the first time an all-Indigenous school – not just from Canada but from anywhere – advanced to the world stage.

The event featured 600 teams with representatives from every continent, except Antarctica.

While the majority of entrants were competing for their high school team, some community-based clubs were also taking part.

“It was just a huge world-class event,” said Chris Mara, a teacher who runs the robotics program at the Wikwemikong school. “This is like the Olympics. How often do you get to get there?”

Team members not only made history simply by advancing to the world competition. They also were one of the three finalists in the most prestigious category, the Chairman’s Award.

More than 60 teams were vying for top honours in this division. After the three finalists were selected, only the winning side was announced after that.

“I think it’s hard for them to realize the scope of what they’ve accomplished,” said Mara, who started the Wikwemikong robotics club five years ago. “I’m really proud of the students’ accomplishments. It’s great to have First Nations students competing at that level. It’s great to see them standing toe-to-toe with the best of the best in the world.”

The Wikwemikong squad also fared well at some other events it took part in during April.

For starters, it participated at a district meet in Waterloo, Ont. At that competition it teamed up with two other schools to become the winning entry in the Championship Alliance category.

The Wikwemikong side then earned a berth into the world tournament by winning the Chairman’s Award division at its provincials, which were held in Mississauga.

The captain of the Wikwemikong team, Mary Pangowish, a 17-year-old Grade 11 student, was also singled out at the Ontario championships. She was presented with the Dean’s List Award, recognizing student leadership.

The Wikwemikong squad is not only interested in faring well in the competitions it enters. The club also has an outreach program which sees its team members travelling to other area Indigenous schools in the hopes of inspiring middle school and high school students to take a greater interest in STEM.

“The team sees its mission as inspiring other First Nations students into STEM fields,” Mara said.

So far team members have travelled relatively close to home when spreading the word of its program to other schools. Mara is hoping the squad’s accomplishments at the world competition might result in some further travels, possibly even out of province.

Aaryn Zoccole, a Grade 11 student on the Wikwemikong team, loves the fact her squad is also trying to help others follow in its footsteps.

For Zoccole, who is from the northern Ontario city of Thunder Bay, this marks her second year at the Wikwemikong school.

She’s hoping an Indigenous school from her hometown will be among those to start offering a robotics team. Thunder Bay’s Dennis Franklin Cromarty High School includes Indigenous students not only from its city but from across communities in northern Ontario.

“I really think they can do it,” said Zoccole, who served as the captain of those participating on the Wikwemikong team’s Chairman Award efforts. “Thunder Bay has a lot of social issues there now. We can inspire them to be powerful too.”

Though the 2018-19 high school robotics season has now concluded, Pangowish said the Wikwemikong squad still has a lot of work to do following its historic competition in Detroit.

There is a robotic powwow upcoming in Calgary May 11. Stantec Calgary is hosting the robotics powwow/tournament at 325 25th Street SE in their lobby and Innovation Centre.

It's robots and more! Registration is on now for this event. See here for more information  https://windspeaker.com/node/events/9223