“Ottawa’s going to have to fix whatever’s going on. I don’t think they have time for any other business, any other people or their constituents, until they fix this up. Because this is certainly bringing down the government.” — Grand Council Chief Glen Hare of the Anishinabek Nation Grand Council
By Shari Narine
Windspeaker.com Contributor

First Nation leaders are wondering where the Indigenous agenda will fall on the priority list of a Liberal government that is struggling.

“I don’t know what’s going to happen here. I hope we can get some clear picture of the business at hand here before summer,” said Grand Council Chief Glen Hare of the Anishinabek Nation Grand Council.

“It doesn’t look very good. Right now, I think, I hope not, I think everything’s going to come to a halt. Ottawa’s going to have to fix whatever’s going on. I don’t think they have time for any other business, any other people or their constituents, until they fix this up. Because this is certainly bringing down the government. Attorney General and (President) of Treasury (Board), both of them, those are the pillars of Ottawa, I would think.”

On Feb. 28, Philpott stood with Seamus O’Regan, her successor as Indigenous Services minister, to champion the introduction of Bill C-92 in the House of Commons. Philpott had been instrumental in working with Indigenous groups on the child welfare bill which aims to return control of Indigenous children in care or as risk of going into care to Indigenous governing bodies.

In her role as Indigenous Services minister, Philpott had a big impact on Indigenous lives, including bringing down the number of boil water advisories on reserves. However, even more importantly, she forged a strong relationship with Indigenous leaders and peoples.

“She was definitely an ally. And one of the things she did say when she was leaving that post was that she would continue to be an ally because she understood our issues and would continue to move our agenda forward. So I think certainly (her resignation) compromises that. But to what extent, we’ll have to wait and see,” said Assembly of First Nations Alberta Regional Chief Marlene Poitras.

Philpott, along with Wilson-Raybould, were shuffled into new positions by Prime Minister Justin Trudeau in mid-January. While Philpott’s move from Indigenous Services minister to president of the Treasury Board was viewed as upward, Wilson-Raybould’s move from Justice Minister and Attorney General to Veterans Affairs was seen as a demotion.

The Yellowhead Institute, a think tank for Indigenous issues, tweeted at that time, “An indication that the so-called "most important relationship" has been downgraded for the remainder of this government's mandate.”

In her lengthy letter of resignation yesterday, Philpott said she had “lost confidence” in how the government handled the SNC-Lavalin affair.  She wrote, “In Canada, the constitutional convention of Cabinet solidarity means, among other things, that ministers are expected to defend all Cabinet decisions. A minister must always be prepared to defend other ministers publicly, and must speak in support of the government and its policies. Given this convention and the current circumstances, it is untenable for me to continue to serve as a Cabinet minister.”

Wilson-Raybould appeared in front of the Justice Committee last week to outline the pressure she said she received from Prime Minister Justin Trudeau and his inner circle, saying they were pushing her as Attorney General to take what she considered inappropriate interference in the SNC-Lavalin criminal proceedings.

“It tells me that there’s obviously something happening internally because these two women were very strong, principled ladies who had a lot of integrity in terms of doing their work. They’re standing up for what they believe in… so more power to them in terms of what they will and will not tolerate. Obviously something is going on there that is a lot bigger than what we’re actually seeing,” said Poitras.

Hare echoes that sentiment, pointing out that neither Philpott nor Wilson-Raybould would leave their positions on a whim.

“These are once in a lifetime positions. My God, there’s certainly a lot more to hear because these two individuals walking away from their positions, certainly they know more than what we know so far,” he said.

In a tweeted response to Philpott’s resignation, Wilson-Raybould commended her friend and colleague for her “constant and unassailable commitment to always doing what is right and best for (Canadians).”

Both Philpott and Wilson-Raybould will continue to represent their respective ridings as Liberal members. However, Trudeau has said he has yet to determine if Wilson-Raybould will remain as part of the Liberal caucus. He has not made a similar statement about Philpott. Carla Qualtrough, minister of public service and procurement, was named acting president of the Treasury Board.

“I know Ms. Philpott has felt this way for some time and while I am disappointed I understand her decision to step down and I want to thank her for her service,” he said.

“In a democracy like ours and in a space where we value our diversity so strongly, we’re allowed to have disagreements and debates. We even encourage it.”

Trudeau pledged to listen “carefully to the various voices, testimonies and opinions” that would come from the Justice Committee’s hearing on the SNC-Lavalin affair. Gerald Butts, who resigned from his position as Trudeau’s principal secretary on Feb. 18, is to appear before the Justice Committee Wednesday. Privy Council Clerk Michael Wernick and deputy minister of justice Nathalie Drouin will also appear Wednesday. In her testimony, Wilson-Raybould named Butts and Wernick as people who pressured her.

In light of Philpott’s resignation, Conservative leader Andrew Scheer said if other Liberal members remained silent, “Canadians will have no choice but to conclude that the ethical rot that infects this government has consumed it entirely.”

Scheer has once more called for Trudeau’s resignation.

New Democrat leader Jagmeet Singh again stressed the need for a public inquiry into the affair.

Should Trudeau lead the Liberals into the next election?

“Not if (ministers) keep resigning at this rate,” said Hare. 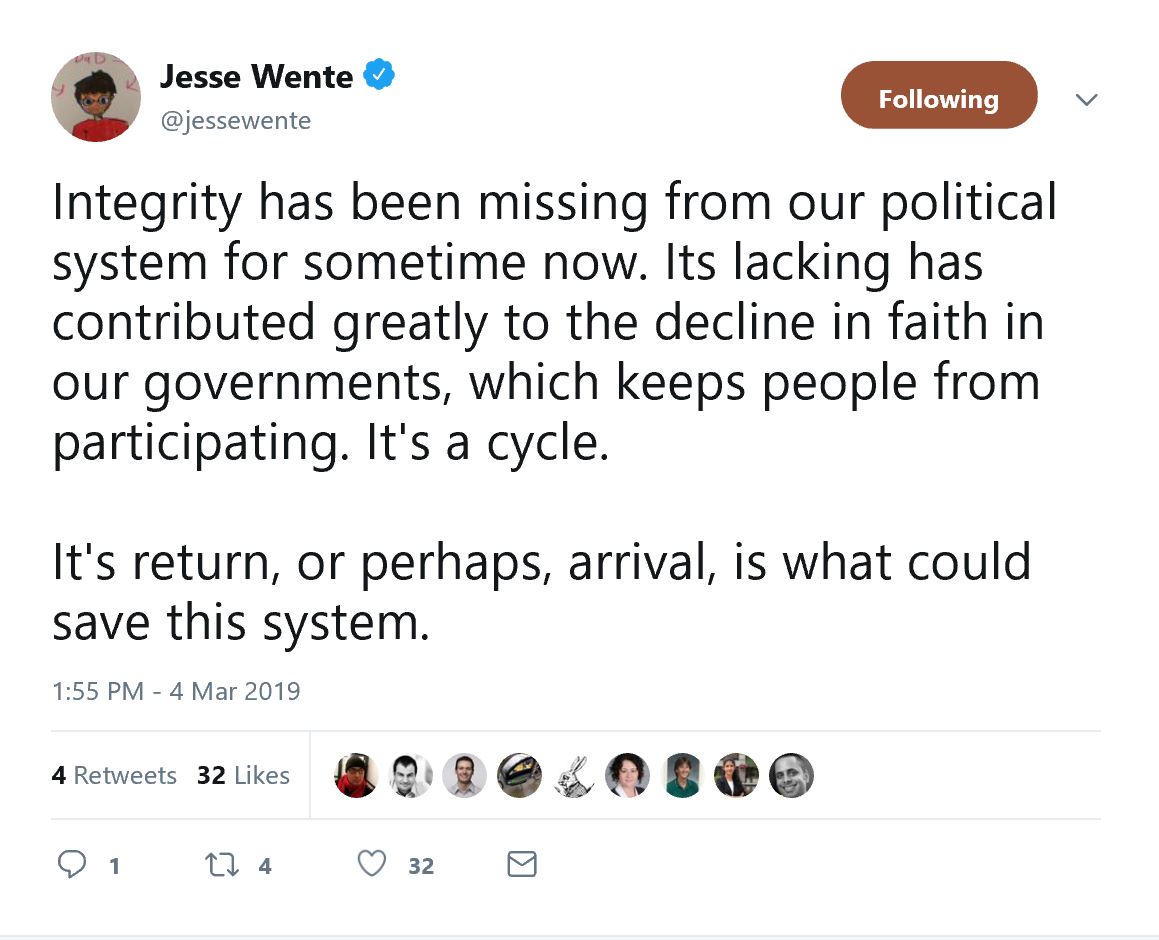