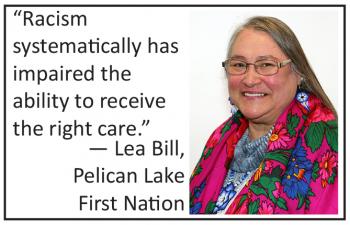 “It’s very clear from the people that were talked to they wanted to be included and they wanted some actions.” —Lea Bill
By Sam Laskaris
Windspeaker.com Contributor

The inaugural Canadian Strategy for Cancer Control had been released back in 2006, but the updated version, released earlier this month, included Indigenous specific action and priorities, something that did not exist in the ’06 strategy.

The Canadian Partnership Against Cancer heard from 7,500 people from across Canada—from all provinces and territories—before finalizing its updated strategy.

Those who provided input offered their thoughts on how cancer affects their lives and what points they wanted to see addressed in the country’s modernized strategy.

“The engagement was really extensive over a period of more than one year,” said Lea Bill, a member of Pelican Lake First Nation, Sask., who worked as a nurse for 25 years.

Bill, who now lives in Calgary, is an Indigenous advisor with the Canadian Partnership Against Cancer.

Bill is pleased Indigenous-themed priorities and actions were included in the country’s updated cancer strategy. But she is not certain how others feel about the final product.

“We haven’t had much feedback because it just got released,” said Bill, who served as the president of the Aboriginal Nurses Association from 1994-99. “But it’s very clear from the people that were talked to they wanted to be included and they wanted some actions.”

The first priority identified in the strategy is to have culturally-appropriate care closer to home.

One of the calls for action for all three Indigenous groups is to recognize and eliminate racism within the system.

“Racism systematically has impaired the ability to receive the right care,” Bill said.

The strategy’s second Indigenous-themed priority is to have peoples-specific, self-determined cancer care.

One of the goals for this priority is to reduce jurisdictional barriers for Indigenous people. Bill said community, provincial and federal health providers have at times been at odds.

“In the meantime there’s still suffering with the disease,” she said. “What ends up happening, the patient gets caught up in the middle.”

As for the strategy’s third Indigenous priority, it is to improve First Nations, Inuit and Metis governed research and data systems.

“Now the implementation process begins,” Bill said. “I’m sure it will be fine but it won’t just happen overnight. The country is quite vast. And there are quite a number of initiatives to do across the country.”

In the strategy it states the focus on First Nations, Inuit and Metis priorities reflects Canada’s commitment to reconciliation, the momentum of cultural competency and the partnerships that have been built across the country.

Susie Hooper, a member of Metis Nation—BC who is also an Indigenous advisor for the Canadian Partnership Against Cancer, is also pleased with the amount of work that went into the strategy.

“I think a good job was done consulting and engaging people all across the country,” she said, adding she was pleased to see Elders contacted to offer their thoughts.

Because the engagement process lasted for more than a year, various initiatives had already started since it was known they would end up being a priority, said Hooper.

“The (Canadian Partnership Against Cancer) has been involved with some projects already.” For example, Metis Nation—BC hired part-time staff this past March to help collect cancer research data from community members and their families.

The national strategy is expected to provide direction until 2029. It was shaped, in part, by things that were discovered since the first strategy was released.

An update was required because of new challenges and new opportunities that developed in cancer control.