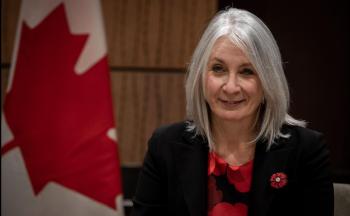 “People’s health care needs are routinely undermined. People feel that they are not taken seriously when they present with a variety of different symptoms, and diagnoses are missed. I could tell you many stories.” — Indigenous Services Canada Minister Patty Hajdu
By Rebecca Medel
Local Journalism Initiative Reporter
Windspeaker.com

Indigenous Services Canada has allocated more than $150,000 to the Indigenous Physicians Association of Canada (IPAC) to support its advocacy work to help ensure Indigenous people have access to health services without fear of discrimination or racism and to improve conditions for Indigenous physicians themselves.

The work of IPAC is to support Indigenous physicians and medical students directly through mentorship programs and in other practical ways and to be advocates for change in health care.

“One of our priorities is working against anti-Indigenous racism in medical education because that’s a place where we feel we can make a significant difference. We have strong relationships with the schools and their accrediting bodies,” said Melanie Osmack, the association’s acting director.

“This funding will increase our capacity so that we can work with allies who want to better respond to the (Truth and Reconciliation Commission’s) calls to action.”

The association has identified eight priorities to tackle the next steps of Canadian medical schools to respond to the TRC calls to action 23 and 24.

Action item 23 is a call to all levels of government to:

Action item 24 is a call “to medical and nursing schools in Canada to require all students to take a course dealing with Aboriginal health issues, including the history and legacy of residential schools, the United Nations Declaration on the Rights of Indigenous Peoples, Treaties and Aboriginal rights, and Indigenous teachings and practices. This will require skills-based training in intercultural competency, conflict resolution, human rights and anti-racism.”

When they do, Indigenous medical students sit through the training sessions and listen to non-Indigenous peers say things that are inappropriate or who ask ill-considered questions.

“That can be really traumatizing for the Indigenous students. We want to see cultural safety training and anti-Indigenous racism training required for non-Indigenous medical students for entry into medical school, as well as being part of the curriculum throughout the full program.” Osmack said.

Another priority for IPAC is to see dedicated support people and Elders available for Indigenous medical students throughout school, residency and all transitions.

And Osmack is hopeful the funding provided by Ottawa will help the association team grow, which until November consisted of one person and is now a team of three. All IPAC Board members are volunteers, working full time in their professions.

“We receive daily requests to be part of different working groups, meetings, media requests, and we’re just a small team. We need to grow so we can continue to engage in this important work,” she said.

Indigenous Services Canada Minister Patty Hajdu is all too familiar with the challenges Indigenous people face in the health care systems across the country and in Ontario particularly.

Before becoming minister of Indigenous Services, she served as Canada’s minister of Health. And before entering politics in 2015, she served in the role of executive director of Thunder Bay’s largest homeless shelter.

“Many people who used that shelter were Indigenous, and, of course, many people living unhoused have high degrees of health care issues,” Hajdu said. “And so to try to get access through the traditional healthcare system was so difficult that, in fact, our shelter hired staff as patient navigators so that we could sit in an emergency room and advocate for an individual to get the proper care and not have assumptions be made about them that were very, very racist and systemically discriminating.

“So, this is a problem that I have personally witnessed and, certainly, Indigenous people will tell you that they face on an ongoing basis. People’s healthcare needs are routinely undermined. People feel that they are not taken seriously when they present with a variety of different symptoms, and diagnoses are missed. I could tell you many stories.”

Hajdu says IPAC is an important voice in healthcare. It helped plan the national dialogues on anti-Indigenous racism in Canada's health systems and it continues to participate in federal discussions aimed at advancing that important work.

The minister asserts it’s Indigenous-led organizations that will come up with the more appropriate solutions to addressing racism and discrimination, both for patients and practitioners.

"As Indigenous physicians, working for safer health systems for Indigenous people is deeply personal work,” said Dr. Michael Dumont, physician director at IPAC. “Our own families and communities are directly impacted by the racism that continues to infect our healthcare systems. While the stories of Joyce Echaquan, Brian Sinclair—and many others—fill us with anger and grief, we also feel empowered by the groundswell of allies and partners that have rallied around the call to anti-racism.”

Echaquan was a 37-year-old Atikamekw woman who died Sept. 28, 2020 in a hospital in Quebec. Before her death, she recorded a Facebook Live video of healthcare workers racially abusing her and mocking her when she screamed in distress. Sinclair was an Indigenous man who died in a Manitoba hospital waiting room on Sept. 21, 2008. He waited 34 hours for medical attention. His body developed rigor mortis before medical staff attended to him.

The 2021 federal budget provides $126.7 million over three years to take action to foster health systems free from such racism and discrimination and where Indigenous people are respected and feel safe.