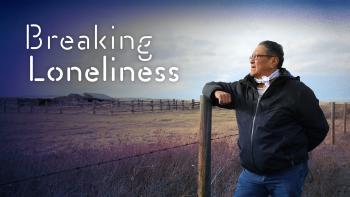 “…check into your ancestry and lineage because you’d be surprised of where you do come from.” —John Chief Moon
By Sam Laskaris
Windspeaker.com Contributor
CALGARY

John Chief Moon has fought his share of battles during his life including substance abuse with alcohol.

And now the 62-year-old from Alberta’s Kainai Nation (Blood Tribe) spends his time helping others with their struggles.

For the past five years Chief Moon, who has been sober for more than three decades, has been an Indigenous peer support worker for the Canadian Mental Health Association (CMHA) office in Calgary.

His responsibilities include talking to people who are living on the street or counselling those in detox centres and youth centres. Chief Moon also assists CMHA staff, including those who are non-Indigenous, with advice on how to help those in at-risk groups.

Chief Moon is also one of four individuals featured in the documentary Breaking Loneliness, a film that discusses people finding ways to escape loneliness and social isolation.

The film is now available online on CBC Gem: https://cbcgem.app/Arn7 and it will also air on CBC TV in Alberta on Sept. 28 at 7 p.m.

“What I’m helping people do is to connect to who we are,” he said. “A lot of Indigenous people are ashamed of who they are. I tell them to check into your ancestry and lineage because you’d be surprised of where you do come from.”

Chief Moon is proof that things can indeed get better. During periods in his life he turned to excessive drinking to help him deal with the loss of a cousin, who was shot and killed in the United States, and his brother who died in an accident.

Chief Moon, however, eventually discovered that his drinking only made things worse and led to more loneliness for him.

“Loneliness for an Indigenous person I think is different from other people because their culture is lost from them and they don’t know much about it and their language is lost,” Chief Moon said in the film, which was written, directed and produced by Brandy Yanchyk, a filmmaker who is from Unionville, Ont. but now lives in Edmonton.

“And they’re walking down a path that’s not ours, and the racism that they have to encounter. It's a lot harder for Indigenous people.”

Yanchyk is thrilled she was able to include Chief Moon in her latest film. She had reached out to the CMHA’s Calgary office to see if they could suggest an Indigenous individual to be in the documentary.

“John is so wonderful,” Yanchyk said. “You feel this incredible sense of understanding of him.”

Also featured in the film are Jace Laing-Schroeder, Tom Greyson and Julie Kraychy.

Yanchyk, who has made 23 television documentaries and four web series since 2009, said she is keen to include Indigenous stories in all of her work these days.

She’s been intrigued with the lives of Indigenous people since working as a statement gatherer in 2014 and ’15, collecting stories of residential school survivors for the Truth and Reconciliation Commission of Canada.

“That really changed my perception of Canada,” she said.

Chief Moon had a difficult upbringing as both of his parents attended residential schools. And he joined the CMHA following another low point in his life. He was laid off from his job at Nortel, where he had worked for 11 years.

Following the loss of his job Chief Moon said he sat around feeling sorry for himself for quite some time. But his wife then convinced him it was time for a change.

He decided to go back to school. He attended Calgary’s Mount Royal University where he upgraded some of his previous courses, eventually graduating with a Psychology degree in 2011.

Chief Moon said he was inspired to go back to school in part because he was saddened to hear about the large number of suicides, especially among Indigenous youth.

“Working at Nortel and in electronics was fun,” he said. “I enjoyed it. But I’m more of a people’s person. I want to work with our own people. I like talking to them and listening to them.”

Chief Moon also realizes he can provide a valuable service.

“If I can say something or do something and it can help even one person, it’s worth it,” he said.

“I’m not naïve. I’m not going to undo 500 years of colonialism. But if I can teach one person at a time, it’s helpful.”