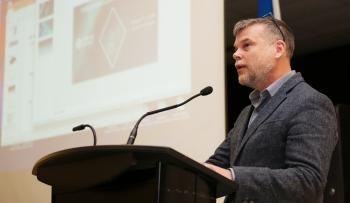 Mark Buell, the director of Indigenous program development for Connect Humanity, in this photo is seen presenting at a previous Indigenous Connectivity Summit.

“The Indigenous Connectivity Institute is building the knowledge, community and advocacy capacity so that Indigenous peoples can build a digital future on their terms.” — Mark Buell, the director of Indigenous program development for Connect Humanity.
By Sam Laskaris
Local Journalism Initiative Reporter
Windspeaker.com

Indigenous leaders from across North America have converged in Winnipeg for this week’s Indigenous Connectivity Summit.

The summit, which begins Monday (Oct. 24) and continues until Friday, has become one of North America’s top gatherings of Indigenous leaders who meet to discuss and share ways of improving Internet access in their communities.

This marks the sixth year of the summit, which was first held in 2017 in the New Mexico capital of Sante Fe.

The summit was held virtually the past two years because of the COVID-19 pandemic.

About 150 delegates are expected to attend the summit in person. Organizers are also accommodating those who wish to participate remotely.

“There are still a lot of people that aren’t able to travel because of organizational policies,” said Mark Buell, the director of Indigenous program development for Connect Humanity.

This week’s summit is being led by the newly-created Indigenous Connectivity Institute (ICI), a community of leaders who will work to close the digital divide between non-Indigenous and Indigenous communities.

“We know there is a significant digital divide in Canada and the U.S. and Indigenous people are significantly affected by that divide,” Buell said.

Buell said this week’s summit is considered the “coming-out party” for ICI.

“What the summit is really about is it presents alternatives for Bell, Rogers or Telus,” Buell said, adding it’s important for Indigenous community members to learn of other connectivity models that will be more beneficial to them.

This event, however, is still being co-hosted by Connect Humanity and The Internet Society.

Connect Humanity is a non-profit fund which aims to improve digital equity by investing in community connectivity providers. It assists communities lacking adequate connectivity needs by identifying solutions and providing both technical help and funding to build Internet infrastructure and skills and tools to help them better participate in the digital world.

As for The Internet Society, founded in 1992, it is a global non-profit organization whose mission it is to ensure the Internet is available to all.

Buell said it didn’t seem right that a pair of non-Indigenous groups – Connect Humanity and The Internet Society – were hosting the Indigenous Connectivity Summit.

That’s what led to the creation of ICI.

“They will have full ownership of the summit in 2023,” Buell added.

Those attending this week’s summit include Indigenous community leaders, network operators, researchers and policy makers. They all share a common interest of connecting Indigenous communities to Internet service that is fast, affordable and sustainable.

“It’s an interesting mix,” Buell said of the summit attendees. “There are a lot of people who are experts in the digital field and a lot of experts in the policy field.”

The five-day summit will include workshops, presentations, talks and panel discussions.

Buell believes the summit will be extremely beneficial.

“The Indigenous Connectivity Institute is building the knowledge, community and advocacy capacity so that Indigenous peoples can build a digital future on their terms,” he said. “And this year's summit will shape policy that will help turn the tide on decades of under-investment in Indigenous communities.”

As in previous years, a list of recommendations from summit attendees will be made public.

It is expected that this year’s recommendations will be released a few weeks after the Winnipeg summit.

These recommendations have been utilized in numerous reports and policies that end up being implemented. They have also led to legislation for government programs throughout both Canada and the U.S.

Buell believes this week’s summit is vital to lead the way to continued progress.

“Following the COVID-19 crisis, the U.S. and Canadian governments, as well as the philanthropic community, are finally starting to invest in closing connectivity gaps which disproportionately impact Indigenous communities,” Buell said. “But to make sure these funds are targeted toward the communities that need it most, Indigenous people need to be at the centre of the development of policies, funding programs and infrastructure projects that affect their communities.”