Indigenous identity fraud law would be ‘a dividing line in the sand,’ says filmmaker 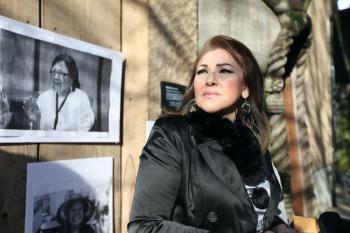 “The climate is ripe for this kind of legislation. Our community needs something done in response to all of this stealing. It’s just horrible.” — Haida filmmaker Tamara Bell
By David P. Ball
Local Journalism Initiative Reporter
Windspeaker.com

“What happens when someone overtly steals something from you, like your lands, your culture or the identity that’s yours?” asked Tamara Bell on Monday.

The Haida filmmaker launched a campaign on Jan. 18 for Canada to create legislation to stop a longstanding trend: People fraudulently claiming Indigenous identity to gain funding or opportunities.

The proposal comes one month after acclaimed filmmaker Michelle Latimer resigned from the CBC television series Trickster in December. She has been accused of not being Algonquin or Métis as she has claimed for decades.

And despite some constitutional and legal issues that would likely need to be addressed in any Indigenous identity fraud law, the idea is getting support from at least one Indigenous lawyer and many Indigenous artists.

Bell, who hosts a show on the Aboriginal Peoples Television Network, proposed Canada pass an Indigenous Identities Act. It was inspired by United States legislation which imposes steep fines and even jail for false Indigenous claims in arts and cultural products.

“How do we make sense of this into the future?” she told Windspeaker.com in an interview. Bell said she is in talks with two federal Senators about drafting a framework for introducing legislation in that Upper Chamber of government.

“The climate is ripe for this kind of legislation,” Bell said. “Our community needs something done in response to all of this stealing. It’s just horrible.”

She said Indigenous identity isn't just about carrying a government-issued status card, but could also be proven by having a specific Indigenous community that "claims" you, recognizing you as a member or relative. As such, legislation would recognize various ways to be considered legitimately Indigenous.

Bell was spurred to act when award-winning Ontario filmmaker and actor Latimer's two-decade-old claims to be Indigenous came into question in a CBC investigation in December, which found no recent genealogical evidence of Indigenous ancestry, but only two distant First Nations ancestors in the 1600s.

“She rose, continuing her false identity, and ended up winning awards and profiteering, making what I estimate to be $1 million since she began to say she was Indigenous,” Bell alleges. “Money that was specifically meant to encourage and create a level playing field for Indigenous people.”

Latimer did not respond to several requests for comment by time of publication.

According to Saint Mary’s University associate professor Darryl Leroux, the issue of identity fraud is "a growing problem” in Canada. “Race-shifting” is how he terms the phenomenon.

"Since the 70s white people have been searching for ways to escape whiteness,” the Halifax-based author of Distorted Descent: White Claims to Indigenous Identity, wrote on Twitter. “I think this is one component of that movement."

Kyla Lee, a Métis defence lawyer practicing in Vancouver, told Windspeaker.com that despite a few potential legal red flags with the legislation as proposed, it’s high time for consequences to prevent a rampant and historic problem.

“This is something that’s perhaps long overdue,” Lee said in an interview. “People take advantage of the fact that in Canada we have Indigenous communities that include people who are white-passing, myself as a good example of that.

“There does need to be a way this type of behaviour can be controlled and addressed in more than just the use of ‘cancel culture.’”

Lee added that some people see that as an “opportunity to get a perceived benefit” of calling oneself Indigenous, such as grants, public funding, different admissions criteria, “without having to have any of the lived experience actual Indigenous people have gone through.”

But the lawyer noted there could be several legal issues with imposing fines upon individuals whose Indigeneity comes into question.

One issue is around the allegation of identity fraud, which is difficult to prove because it requires proof the offender knowingly and intentionally lied about who they were — unlike Latimer, who claimed she genuinely believed through her family lore she was Algonquin and Métis — and also requiring proof that someone else was deprived as a result.

“Having a regulatory framework in place to say who is and isn’t Indigenous — or to police people trying to assert Indigenous heritage — opens up the potential for abuse,” Lee noted. “I have a colleague who is Indigenous, but her First Nation was declared extinct.

“I’ll be perfectly frank, I had my Métis card up until three years ago but it expired … It doesn’t change my history or who I am. I’m still Métis.”

Another bigger issue with federal legislation, Lee said, is that it might violate Canada’s protections for freedom of expression and freedom of association. The government could try to bypass Charter issues by invoking the “notwithstanding clause” — which requires a periodic review of the law after a set time — but the current laws do protect people’s right to identify as they wish, to create cultural products, and to associate and identify with any group they choose.

The day after Bell’s press conference about her proposed identity legislation, the Indigenous Screen Office announced it would be launching a community engagement process over the coming months on Indigenous identity, “beginning with conversations with Elders and Indigenous organizations with knowledge and expertise in this area,” the agency said in a statement.

“This is a nuanced issue that requires time to listen to the many different community perspectives,” the organization said. “The ISO has a number of mechanisms already in place to vet Indigenous identity.”

The ISO said it aims to have a new identity-vetting policy in place by this fall when its next round of film funding applications are approved.

With support from the federal heritage ministry, the ISO was created in 2017 by a coalition of top Canadian film industry players, including Telefilm Canada, Aboriginal Peoples Television Network, CBC, the National Film Board of Canada and others in the film sector.

In a previous statement as the Latimer controversy exploded in the news, the ISO emphasized that “Indigenous opportunities should be directed to Indigenous Peoples,” and that Métis, First Nations and Inuit sovereign nations should “determine their own citizenship.”

“Knowing your connection to community and familial ties is an essential component of Indigenous identity,” the ISO said.

Latimer said on Facebook that she first identified as Indigenous “as a teenager in the 1990s” in hopes of “embracing (her) family’s heritage” and “reclaiming who we are.”

Latimer recently claimed to have ancestors in Kitigan Zibi First Nation in Quebec, a claim questioned by members of that community itself.

A month after the controversy, the website of Latimer's production company, Streel Films, still lists her as "Métis/Algonquin” and states that her filmmaking is “informed by her Métis/Algonquin heritage.”

She stated on Dec. 21 “I stand by who I am and by my family’s history … I recognize my responsibility to be accountable to the community and my fellow artists."

She isn’t the only Canadian creative to face such accusations. Award-winning novelist Joseph Boyden was alleged in 2016 to have fabricated his claims to Mi'kmaq and Métis ancestry — and later on, to being Nipmuc and Ojibway.

“A small part of me is Indigenous, but it's a big part of who I am,” Boyden said in a 2017 statement. “It's clear to me now that I've made mistakes … My family's heritage is rooted in our stories. I've listened to them, both the European and the Indigenous ones, all my life.”

The ISO has acknowledged “there are significant complexities” when it comes to who qualifies as Indigenous, particularly for many Indigenous people “who have been displaced from those connections as a result of colonial practices” such as the Sixties Scoop, foster care and adoption. But those “should not be used to make claims to Indigeneity.”

Some supporters of regulating Indigenous identity propose that instead of individual penalties and fines, as Bell advocates, that it be limited to any Indigenous-claiming person receiving public funding or awards.

Lawyer Lee proposed that instead of federal legislation, that the monitoring and enforcement of such an Indigenous Identities Act could fall to First Nations, Métis and Inuit organizations, which would additionally solidify self-determination over their own memberships.

“If people want this, then pushing for it within your own Indigenous community and Indigenous governance could be one of the steps we take in Canada towards recognizing more self-determination for Indigenous groups,” Lee said. “There’s a lot Indigenous governments can already do to create rules around this.

“They should be exploring their power for creating consequences for violating those rules.”

For Bell, the legislation and campaign is just the start of what she hopes is a conversation that will prevent future abuses of Indigenous identity.

“I hope this is a dividing line in the sand, much like the N-word, to say ‘Not anymore. Not on my watch’.”