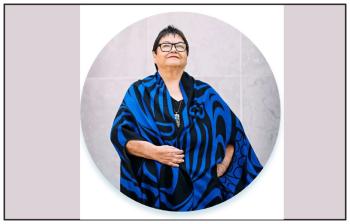 Carol McBride, president of the Native Women’s Association of Canada

“A lot of (Indigenous) women…have not been treated very well by police forces, especially if they’re a non-Indigenous police force. I’ve known women that felt by giving information to (the police) they would be treated differently and rightfully so.” — Carol McBride, president of the Native Women’s Association of Canada
By Shari Narine
Local Journalism Initiative Reporter
Windspeaker.com

A system by which Canada’s police forces will collect data on the Indigenous and racialized identity of victims and accused persons won’t begin until at least 2024.

According to the StatsCan report, Police-Reported Indigenous and Racialized Identity Statistics via the Uniform Crime Reporting Survey, a collection process for new data is expected to be rolled out gradually across police services depending on a number of factors, including budgetary constrictions, implementation of new policies within police services, and training delivery timelines.

“It should be noted that while the Survey may be ready to accept data (at the beginning of 2024) …it does not mean that the data will be available to collect,” states the report issued. The report includes six draft recommendations for review.

Carol McBride, president of the Native Women’s Association of Canada (NWAC), is disappointed that something as vital as collecting disaggregated data is still not being prioritized.

“For the horrible, horrible things that have happened to our people through history, you’d think that acceleration of the issues would be a priority. But sometimes you feel it’s not given what it deserves, the attention that it deserves,” said McBride.

McBride understands the importance of collecting the data in the right way when it comes to quantifying the number of missing and murdered Indigenous women and girls.

In 2021, the RCMP released a report stating that between 1980 and 2012, 1,017 Indigenous women and girls were murdered and another 164 had been reported missing and never found. However, these figures do not include unexplained or suspicious deaths. As well, Indigenous identity of victims is not always recorded by the RCMP.

“At NWAC, we know those numbers did not adequately depict the magnitude of the genocide. We know that many murders are wrongly attributed to suicide or accident. We know that, too often, the names of missing women are simply not listed in police files,” states the 2021 NWAC Action Plan aimed at ending the violence against Indigenous women, girls, and gender-diverse people.

Accurate figures are desperately needed, says McBride, in order for organizations like hers to act effectively.

“It tells us different things…It tells us where our people are involved in, like victims or the perpetrators or whatever. If those can be identified we’ll know where the help is needed, where the issues are…(It) definitely gives us a guide on where to go, on what we need to think about or what we need to plan for,” she said.

Among the six draft recommendations contained in the Survey report is to collect data based on both the “officer perception” method and the “self-identification” method. The data collected by each method will be kept separate.

Both methods are important, says McBride, but she also notes that many Indigenous women have a fear of self-identifying when dealing with the police.

“A lot of women…have not been treated very well by police forces, especially if they’re a non-Indigenous police force. I’ve known women that felt by giving information to (the police) they would be treated differently and rightfully so,” she said.

The StatsCan disaggregation data report recommends that the police officer’s perception data be collected before the person self-identifies “because perceptions could influence an officer’s decision-making in an interaction and lead to disparities in outcomes.”

McBride says it’s important that her organization be used to communicate with Indigenous women the necessity of self-identifying in order to collect accurate data. She says NWAC must also be used for training police officers.

McBride would like to see more engagement with Indigenous organizations than what appears to have been the case in putting together the draft recommendations. The engagement process began in July 2020 and concluded with virtual roundtables held up to February 2022.

According to StatsCan, of 93 respondents who offered feedback for the Survey report and recommendations, only three were Indigenous representative bodies.

NWAC asked StatsCan for a further breakdown of Indigenous involvement and were denied any details.

"Unfortunately, due to our confidentiality policies, we cannot release the names of the respondents,” NWAC was told in an email from StatsCan. “We would like to underline that the Canadian Centre for Justice and Community Safety Statistics (CCJCSS) team worked together with both the Centre for Indigenous Partnerships and Diversity Statistics Division at Statistics Canada to reach out to National Indigenous Organizations (NIOs), as well as other local groups identified by police services."

McBride is hopeful that Indigenous voices were captured in some of the other respondent categories, such as community organizations/associations (18 respondents) and police services (40).

Another recommendation looks at the possibility of collecting data in the same manner in the future “for all police incidents, even those that do not result in a crime.”

McBride says such data, which could include missing persons reports and wellness checks, “is important as well because it gives us the knowledge or the information that our people are being served in the right way, that their calls or their needs are being met.”

McBride admits she has concerns about how the data will be used and its potential to be abused.

“You have that fear in all areas (that data is collected) …because you’re never really, really sure on how it’s going to be used, but I think the good that this data collection will do outweighs my fear,” she said.

The next steps, according to the StatsCan report, include getting feedback on the draft recommendations; doing the technical work that will allow for the collection of the data; working in collaboration with the Canadian Associations of Chiefs of Police and other parties to develop reporting standards and guidelines; and working with Indigenous and racialized organizations, subject-matter experts and the police community to develop training for the collection of the data.

McBride understands there are still many steps remaining.

“I wish it wouldn’t take so darn long to get things done,” she said.

“We’re missing and we’re losing our mothers, our aunts, our nieces. The numbers keep going up with the unanswered questions. Horrible things are happening to our women across this country.”