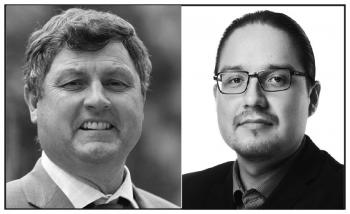 “It’s a great step that the province did this because our communities really need to benefit from the land. Mother Earth is providing in a different way.” — AIOC vice-chair Stephen Buffalo
By Shari Narine
Local Journalism Initiative Reporter
Windspeaker.com

Although not yet fully operational, the Alberta Indigenous Opportunities Corporation has already assigned $600,000 in seed money to two Indigenous groups interested in purchasing the federally-owned Trans Mountain Pipeline and expansion.

Indigenous Relations Minister Rick Wilson confirmed that the funds have been provided to two groups to “continue engaging Indigenous communities in western Canada, including those communities directly on the TMX pipeline route. It’s important that communities speak with each other and to have a venue for sharing their concerns and aspirations.”

Wilson would not say which groups received the funding.

Iron Coalition and Project Reconciliation are two Indigenous-led organizations that want to have an ownership stake in TMX.

On July 15, while announcing orphan well work that would be undertaken by Alexis Nakota Sioux Nation-owned company Backwoods Energy Services on the Enoch Cree Nation, Premier Jason Kenney noted that the TMX pipeline was scheduled to cross the Enoch Cree Nation “fairly soon.”

Kenney commended Enoch Cree Nation Chief Billy Morin, who also serves as Treaty 6 grand chief, for his “vision and leadership …. I want to thank him as well and his nation for the support for the TMX pipeline.”

Morin is active in the Iron Coalition, which is mandated by the Assembly of Treaty Chiefs to work with Alberta First Nations and Métis Settlements to secure ownership in TMX. The organization is co-led by Alexis Nakota Sioux Nation Chief Tony Alexis.

“Discussions are currently moving forward with ultimately Indigenous ownership in that project and I think you’ll see in the coming months some announcements in terms of Treaty 6 and Alberta Nations driving that bus to ultimately possibly owning that project,” Morin said on Wednesday.

Project Reconciliation is led by representatives from First Nations in Alberta, Saskatchewan and British Columbia.

The AIOC’s mandate includes funding Indigenous groups outside of the province as long as their project will benefit Alberta’s natural resource sector.

“There’s a lot of lead work involved in putting something like this together, because you’re going across borders and dealing with a lot of First Nations in Alberta and on the B.C. side,” said Minister Wilson. “That’s not going to be one that’s happening fast. … The pipelines are more the long term thing. They take a lot of work behind the scenes to get them.”

The minister said it’s important for AIOC to support Indigenous groups to be involved in TMX ownership.

“We’re hoping when it comes to TMX… we can just have one group moving it forward so we don’t have conflicting groups moving forward,” said Wilson.

The AIOC was formed through legislation introduced last October. The AIOC is backstopped by the province with $1 billion in loan guarantees aimed at reducing the cost of capital for Indigenous groups to go ahead with commercially viable projects in energy, mining or forestry. Projects are to be funded for no less than $20 million.  However, as of yet, no projects have been announced.

AIOC vice-chair Stephen Buffalo says the coronavirus pandemic, which shut down much of the province starting in mid-March, made carrying out business “very tough.”

He also attributes some of the delay to the board of directors, appointed in January, “doing our due diligence and some of our internal governance to make sure that when this gets going it can float and stand on its own.”

Wilson says the AIOC, which operates at arms-length from his ministry, is one step closer to that goal. He anticipates the new chief executive officer will be announced next week.

“Once we can get that person in place then we’ll let them start making the announcements of some of the roll outs,” said Wilson.

However, operating with an interim CEO up to this point hasn’t meant the AIOC hasn’t been active. Along with handing out seed money, it has also started combing through hundreds of proposals for projects, reviewing them and assessing them for viability.

“Ones I’ve heard of, there are several that are great projects that will be able to get out the door fairly quick,” said Wilson. “As early as this fall we should be able to start getting them out the door. Once they start rolling it’s going to be just a continuous roll out.”

Buffalo, who is also president and CEO of the Indian Resource Council of Canada, says while he will continue to advocate for the oil and gas industry, he understands that diversification is also important and AIOC funding-approval will be taking that into consideration.

“As we progress in this world we’re definitely looking at the green energy, transmission lines, solar panelling, wind turbines, maybe even a gas-fired power generation plant as opposed to coal. Those are things that we see on the radar. It’s just a matter of going through each of the investment packages and see what will stick,” he said.

“It’s a great step that the province did this because our communities really need to benefit from the land. Mother Earth is providing in a different way.”