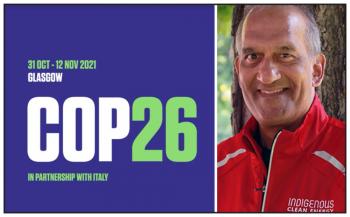 “It gives you a lot of exposure. Everyone who is at the conference will see our program.” — Chris Henderson, executive director of Indigenous Clean Energy
By Sam Laskaris
Local Journalism Initiative Reporter
Windspeaker.com

Officials from Indigenous Clean Energy (ICE) are playing a significantly different role this year at a major international conference.

Instead of simply being attendees, ICE representatives will host three sessions at COP26, the United Nations’ climate change conference, which began Oct. 31 and continues until Nov. 12.

COP stands for the Conference of the Parties. The first COP conference was staged in Berlin in 1995. COP26 signifies the 26th year the event has been held.

“It is the global meeting space for climate change,” said Chris Henderson, the executive director of ICE.

Henderson believes having ICE reps leading sessions at the conference is huge news.

“It gives you a lot of exposure” he said. “Everyone who is at the conference will see our program. The exposure you’ll get is very high.”

About 20,000 guests from approximately 200 countries are expected to attend the conference.

Those attending will include heads of state, climate experts, civil society groups and business leaders.

Canadian Prime Minister Justin Trudeau is one of the more than 120 world leaders attending.

Henderson said ICE has enjoyed success with a number of different projects in Canada. And it only makes sense to explore whether that success can be extended beyond the country’s borders.

“The inevitable next step is can this knowledge be used elsewhere,” Henderson said.

Events at this year’s COP will be held in two zones, the Blue Zone and the Green Zone.

The Blue Zone is open to those members of a national delegation that are registered with the United Nations, UN workers or those employed by related organization or agencies, media or not-for-profit observer organizations.

Members of the general public can attend Green Zone events. Those sessions will also be broadcast online via YouTube.

“We’re the only session the Canadian government has approved (for COP26),” said Henderson, who has more than a quarter century of experience working with Indigenous communities on renewable energy projects.

Though approval was granted to present in the Green Zone a couple of months ago, ICE reps did not receive word about Blue Zone approval until recently.

“It was kind of official only about two weeks ago,” Henderson said, adding Canadian government approval undoubtedly assisted ICE efforts. “We were pretty confident we would get in though.”

ICE officials will host two sessions in the Blue Zone and one in the Green Zone.

First up is a Blue Zone session titled Indigenous Clean Energy and UNDRIP. It will be held Wednesday, Nov. 3.

This session will highlight various clean energy projects in Canada that have been Indigenous led or have featured Indigenous partners.

Projects discussed will show how clean energy transition has already occurred and how it aligns with the United Nations Declaration on the Rights of Indigenous Peoples (UNDRIP).

The following day, Nov. 4, a Green Zone session will be held. Members of the public can watch it at 8:30 p.m. EST here: https://www.youtube.com/watch?v=mT6HckyhPWI\

This session is titled Community Renewable Energy Microgrids (REMs) in Action. During this session there will be discussions on how Indigenous REMs can advance and integrate the Sustainable Development Goals put forth by the UN.

This discussion will concentrate on Indigenous and/or community-led and partnered REMs, climate finance, policy mechanisms and utility regulations.

Freddie Huppe Campbell is ICE’s Global Hub program lead and has made the trip to Glasgow, Scotland for the conference. She feels it is important to get ICE messages out now.

“We have an opportunity as a collective to live and act in a way that protects Mother Earth and sustains living beings for generations to come,” she said. “There are countless examples and centuries of wisdom across the world that have provided us with road maps to reverse climate crises. It is no longer a question of why, when or how, but rather a choice – now or never.”

Eryn Stewart, ICE’s managing director of programs, has also made the trip to Glasgow. Henderson will be presenting at the conference virtually from his Ottawa home.