Indigenous documentary makers chosen to receive $50,000 each for films 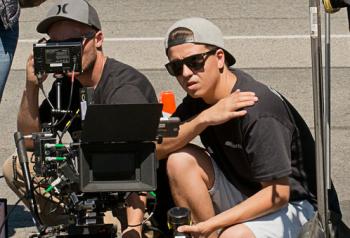 “It’s important to see the legacy she has created for other kids, not only for her grandchildren and great grandchildren.” —Nolan McAllister on his documentary Muriel Sasakamoose: Kind Heart and Secwepemc Matriarch
By Sam Laskaris
Windspeaker.com Contributor
VICTORIA, B.C.

Newman, a 44-year-old Indigenous director who lives in Victoria, was planning to make a short film, perhaps five to seven minutes long, about how First Nations culture is being integrated into Victoria’s Oaklands Elementary School.

But Newman’s latest work, titled The Oaklands Totem, can now be extended to about 50 minutes in length. The documentary will include footage of the 10-foot totem pole Newman began carving at the school this past February.

Newman is now able to make this longer film because he’s one of the four Indigenous entrants to be awarded $50,000 each from TELUS STORYHIVE to produce documentaries featuring local people, places, history and cultures.

Since 2014, filmmakers from across B.C. and Alberta have been annually vying for funding from TELUS STORYHIVE to help produce their documentaries. A total of 382 applications were submitted this year. Thirty were chosen to receive $50,000 each.

All winners will receive an additional $5,000 from Creative BC, an organization established by the provincial government.

“I didn’t get a chance to see all of the other (submissions),” said Newman, who has Kwakwaka’wakw and Sto:lo Nation ancestry. “But you have to be happy any time there’s a field of this many and you are one of the few chosen.”

Newman believes his film, which he’s hoping to have completed and ready for screening by next June, comes at an important time in history.

Following calls to action from the Truth and Reconciliation Commission, there’s a growing interest having Indigenous learning in school teachings.

“It makes it part of everyday curriculum,” Newman said of his project, including the carving and installation of the totem pole at the Victoria school. “And it’s not just Indigenous students who take part in it.”

Newman believes his work will have a long-lasting effect and that it’s important to develop young minds.

“The important aspect of this is what it’s going to leave children with,” he said. “We have to do reconciliation with adults of today. But the biggest changes are going to come with the children of tomorrow.”

Newman’s documentary, as well as all of the other films that received funding, will eventually be shown on TELUS Optik TV’s On Demand via its community showcase program.

The film will detail the life of Sasakamoose, who broke down many barriers.

Besides being a founding member of the BC Native Women’s Association, Sasakamoose ran in provincial and federal elections.

“We’re trying to figure out the story and how we want to do it,” said McAllister, who was planning to meet with Sasakamoose at her home in Paul Lake, B.C. this week to discuss documentary details.

McAllister, a 26-year-old who works in corporate communications, met Sasakamoose at an event and once they got talking was surprised to find out she has known his grandmother for more than 60 years.

McAllister was intrigued by Sasakamoose’s stories and believes it’s important others are also made aware of them through his documentary.

“It’s important to see the legacy she has created for other kids, not only for her grandchildren and great grandchildren.”

McAllister’s film will allow Sasakamoose to reminisce about her life growing up in Kamloops, as well as her family, jobs and the impacts she has had.

Meanwhile, the other Indigenous entrants who received funding to make their documentaries this year are Leigh Joseph, whose film is titled Squamish Plants, and the husband-and-wife duo of Eiko Jones and Kim Isles, who will make the documentary titled Salmon Capital – Campbell River.

Joseph is an ethnobotanist whose film will explore cultural interrelationships between plants, people and places. Her documentary will feature Leigh discussing the importance of now living on her traditional territory after she grew up away from home.

Salmon Capital – Campbell River will explore the significant role salmon has played on the city’s development, located on the east coast of Vancouver Island.

The documentary will include information about how local Indigenous people used salmon over the years. It will also delve into other aspects, including the rise of sport fishing and tourism ventures.