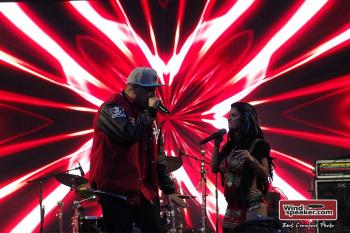 Photo from Indigenous Day Live event in Edmonton. This year Indigenous Live goes to Calgary on June 22, as well as Winnipeg and Whitehorse.

APTN has tried “in our own small way to present the true face of Indigenous Canada to other Canadians..." — Jean LaRose, CEO of the Aboriginal Peoples Television Network
By Jeremy Harpe
Windspeaker Radio Calgary

Indigenous Day Live has been held annually since 2007 to celebrate National Aboriginal Day, and this year that tradition continues with events scheduled for Winnipeg, Calgary and Whitehorse.

“The goal initially was to try to create an opportunity for Indigenous artists to celebrate the day by inviting our community and the mainstream Canadian community to participate in what is our, basically, our day of the year,” said Jean LaRose, CEO of the Aboriginal Peoples Television Network.

From that point forward, the network wanted to establish a connection with Canadians by showcasing Indigenous communities through this day of celebration, he told Jeremy Harpe of Windspeaker Radio Calgary.

It has evolved from a simple event to one that has been held simultaneously in as many as eight centres across the country, as it was two years ago.

The live events are also broadcast, this year on June 22. And for the first time, Calgary will be a live event centre.

The goal is to go to each city across the country. Calgary's mayor and city council was very receptive to the idea, LaRose said. Albertans have enjoyed the event in Edmonton in previous years.

The day provides activities for the family, including face painting, storytelling and musical acts. There are artist vendor booths for shopping. In Calgary, there will be a powwow held between 11 a.m. and 5 p.m. And then there is the big musical acts into the evening.

LaRose has been head of the network for the past 17 years, but is set to retire in December. He says he’s proud that APTN has tried “in our own small way to present the true face of Indigenous Canada to other Canadians, to mainstream Canada, to get them to understand who we are, where we’re coming from, our history, our challenges, but also our successes.”

For more information go to https://indigenousdaylive.ca