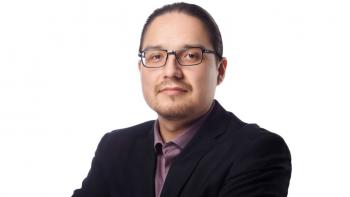 “I think this is a winning formula that they just can’t ignore in the first round of awarding (proposals) for storage space for carbon capture hubs.” — Enoch Cree Nation Chief Billy Morin
By Shari Narine
Local Journalism Initiative Reporter
Windspeaker.com

Enoch Cree Nation Chief Billy Morin is confident that once the province sees the “winning formula” in the partnership that five Indigenous communities have with Enbridge Inc., the Alberta UCP government will have no option but to give the go-ahead to the Open Access Wabamun Carbon Hub.

Enoch Cree Nation has joined forces with the nations of Alexander, Alexis Nakota Sioux, and Paul to create the First Nation Capital Investment Partnership (FNCIP). The FNCIP has joined with the Lac Ste. Anne Métis community to round out the Indigenous partners in the proposed carbon capture and storage facility development for the west side of Edmonton.

Carbon capture or sequestration is the removal of carbon dioxide from the atmosphere and storing or disposing of it through a variety of ways. It is an effective means for reducing emissions and mitigating the effects of climate change.

“We have relationships with big emitters on this side of town. It just made geographical sense,” said Morin.

In December 2021, the province put out a request for full project proposals (RFPP) for carbon sequestration hubs. The RFPP identified the Heartland region, Alberta’s northeast, as an area of the initial focus because it has a “large concentration of emissions, is accessible for potential storage areas.”

Before the project proposal went out, Enbridge approached FNCIP.

“We negotiated 50 per cent ownership with us four Indigenous communities and Lac Ste. Anne Métis. That’s why we’re pretty excited about this one first as opposed to saying we’re in the Heartland first,” said Morin.

Having equity in half the project, he says, means a “full seat at the table.” That translates into a say on the environmental effects, the design of the project, construction jobs, and more.

“We do have to walk with some humility and say we do need partners like Enbridge, we do need emitters like Capital Power, which has already signed up with Enbridge and Lehigh (Hanson Materials Limited). We need those industry partners for their expertise, but also to come to the table in a fair and equitable way and that’s what Enbridge has done,” said Morin.

The RFPP sets out as one of the criteria for approval “demonstrating experience in constructing and operating similar projects … (and) experience in infrastructure development and injection facilities.”

As the province is expecting a high amount of interest, according to the RFPP the plan is to “move forward in a manageable manner … in phases based on geographical regions of the province” starting with the Heartland.

“We didn’t hear a lot out of the Wabumun region but I think this is a winning formula that they just can’t ignore in the first round of awarding (proposals) for storage space for carbon capture hubs,” said Morin.

The proposals were due Feb. 1.

Now it’s a waiting game and Morin hopes the first round of proposals will be awarded in March or April.

If the go-ahead is given, Morin anticipates the Alberta Indigenous Opportunities Corporation (AIOC) “would be an investment vehicle we would explore” for loan guarantees.

Enoch, Alexander and Alexis Nakota Sioux Nations were part of the AIOC’s first commitment in loan guarantees in the Cascade Power Project. The three nations were joined by Kehewin Cree Nation, O’Chiese First Nation, and Whitefish Lake First Nation to form the Indigenous Communities Syndicate LP (ICS) to invest in that project.

The AIOC was formed as a Crown corporation in November 2019 by the province to help Indigenous groups invest in natural resource projects in Alberta.

While FNCIP is hoping the Wabumun hub will be its first project, that doesn’t mean the group isn’t looking at possible involvement in the Heartland region as well.

A First Nations-led coalition has submitted a proposal for the Heartland region. Frog Lake and Kehewin First Nations are leading the Treaty Six-Kanata Carbon Hub Ltd. Partnership which brings together the Treaty Six First Nations through the Tribal Chiefs Venture Inc., and Kanata Clean Power & Climate Technologies Corp. Carbonvert Inc., which has experience in developing carbon sequestration, recently joined the venture in January.

“Until we’re ready to announce our partnership over there, we wouldn’t say we’re in competition with anybody at this point,” said Morin of any pending developments in the Heartland region.