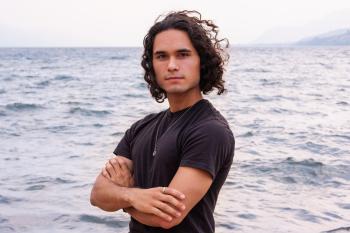 “I don’t think there is anyone else in this country that has that worldview in the way Cameron does.” — Simone Orlando, artistic director and CEO for Ballet Kelowna.
By Crystal St.Pierre
Local Journalism Initiative Reporter
Windspeaker.com

Dancers from Ballet Kelowna are set to take the stage on Nov. 4 and Nov. 5 with an original work from its first-ever artist-in-residence Indigenous choreographer, Cameron Fraser-Monroe.

Fraser-Monroe, 23, will bring the story of taqəš from his community, Tla’amin First Nation, to the stage.

“It follows the story Raven Returns the Water, which is a Tla’amin story,” said Fraser-Munroe. “I think it is, really at the time and I think still today, prescient in that it was discussing the ways greed or one person controlling resources isn’t necessarily good for the community and isn’t even good for the person in charge. Sometimes it can have negative consequences.”

The 20-minute performance tells the story of Poho (Raven) who is in her valley and is realizing the environment around her is drying up slowly and animals are dying.

She sets off in search of the cause, flying for three days and three nights, and then sees a green light in the distance.

When she approaches the green light, she finds a frog who had drunk all the water.

Raven is so thirsty she is sucking on a pebble and goes up to frog and asks him to release the water.

Frog refuses, so Raven throws the pebble into frog’s mouth, which causes him to get a stomach ache. Frog then begs Raven to help him.

She pokes a hole in the frog’s stomach and grabs the rock out and all the water comes out and fills the valley back up.

After that, every night frog apologizes by calling out to Raven, who responds to him as a reminder to not be greedy.

“I found this story to have really valuable lessons for the modern day, which is always beautiful in our stories when you can find things that apply to your life directly,” said Fraser-Monroe.

Costumes for the performance are a combination of aspects from traditional clothing mixed with contemporary.

“That is a very important thing to my work, is the way I portray the dancers is appropriate. I never want to be dressing them as First Nation people or misrepresenting them as First Nation people, so the costuming is reflective of that. It needs to be something they can move in but also a nod to the culture, so it is an interesting balance that I have to work with,” he said.

Growing up in Vernon, B.C., Fraser-Monroe started dancing at the age of three. He started his career with Ukrainian dancing, but spent many years in powwow, hoop and grass dancing, as well as doing ballet, jazz and tap.

At age 15 he moved to the Royal Winnipeg Ballet School where he graduated from high school while studying ballet.

Following his graduation, he has performed with many companies, including Red Sky Performance at Jacob’s Pillow Festival, Dancers of Damelahamid at the Banff Centre and the International Cervantino Festival, the Royal Winnipeg Ballet at the National Arts Centre, and with the Atlantic Ballet Theatre of Canada.

“I don’t think there is anyone else in this country that has that worldview in the way Cameron does,” said Simone Orlando, artistic director and CEO for Ballet Kelowna.

Orlando said this well-rounded skill-set Fraser-Monroe offers is exactly why the studio asked him to be the artist-in-residence in celebration of its 20-year anniversary.

“Cameron brings a very different perspective … My initiative as artistic director is to provide opportunities for those who haven’t been provided opportunities elsewhere,” she said. “As part of our journey as an organization, our mandate is encouraging and promoting Canadian dance artists.”

In collaboration with anniversary activities throughout his position with Ballet Kelowna, Fraser-Monroe will contribute three original pieces to the studio’s programs, Aspirations, Reflections and Transformations.

Each program will showcase three pieces of work from three different artists that will include several of the dancers from the studio.

“I think it’s really exciting that we are at this point that we can have First Nation people creating ballets and leading companies like this. It’s an exciting time,” said Fraser-Monroe.

Each of the programs will travel to various locations across Canada and tickets for each show can be found here https://www.balletkelowna.ca/ballet-kelowna-on-tour