Indigenous businesses stepping up to answer the call during pandemic 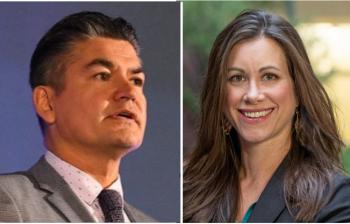 Shannin Metatawabin, CEO of the National Aboriginal Capital Corporations Association, and Tabatha Bull, president and CEO of the Canadian Council for Aboriginal Business

“The government took so long for the money to get through the system.” — Shannin Metatawabin, CEO of NACCA
By Sam Laskaris
Local Journalism Initiative Reporter
Windspeaker.com

Results from a survey released this past Friday indicate that Indigenous businesses are ready and able to provide support during the COVID-19 pandemic, but many need support in return, including an urgent need for liquidity.

The survey was led by the Indigenous Business COVID-19 Response Taskforce, a group comprised of leaders from First Nations, Métis and Inuit organizations. Its goal is to provide a unified Indigenous business voice to the federal government to deal with pandemic impacts.

A total of 838 Indigenous business owners and executives from across the country responded to the survey, which was conducted from April 29 through May 22.

One of the most significant findings was that 44 per cent of Indigenous businesses stated that without support they were likely to be forced to permanently close their doors within three to six months. Ten per cent of those owners felt they could not survive one month without support.

Meanwhile, from those who responded to the survey, two per cent of businesses said effects from the pandemic had already forced them to permanently close.

To coincide with the taskforce’s survey results released last week, it was also announced on Friday that there would be a national database of Indigenous businesses able to supply COVID-19 related goods.

Tabatha Bull, the president and CEO of the Canadian Council for Aboriginal Business (CCAB), is pleased Indigenous businesses are helping out with this issue.

“From the CCAB perspective, it was a great opportunity for us to be asked to help,” she said.

Bull said at least two dozen Indigenous businesses across the country are currently providing some PPE.

“Every week there’s a new (Indigenous) business that has pivoted to produce PPE,” she said.

Data collected from those that participated in the taskforce survey indicates 12 per cent of Indigenous businesses can provide supplies or equipment that could meet the country’s medical needs.

Also, eight per cent of the survey respondents said they had the ability to quickly scale up their productivity or pivot their operations to provide some PPE.

Bull also said that two weeks ago there was a procurement for Indigenous companies that were available to produce non-surgical masks. Ten companies have already stepped up and indicated their willingness to do so.

“They had a significant interest and our members put in an answer for that call,” said Bull, who was appointed to the federal COVID-19 Supply Council last month.

Besides the CCAB, the Indigenous Business COVID-19 Response Taskforce includes leaders from seven other organizations.

They are the Assembly of First Nations, Council for the Advancement of Native Development Officers, Indigenous Tourism Association of Canada, Inuit Tapiriit Kanatami, National Indigenous Economic Development Board and Pauktuutit Inuit Women of Canada and the National Aboriginal Capital Corporations Association (NACCA).

Indigenous Services Canada, a ministry of the federal government, is also a taskforce participant.

Shannin Metatawabin, the CEO of NACCA, said numerous Indigenous businesses have finally been able to access some funding made available for economic relief.

“The government took so long for the money to get through the system,” Metatawabin said.

NACCA officials had been pushing for financial assistance for Indigenous businesses since mid-March when the pandemic took off across Canada and restrictions were put in place to slow the spread.

Many Indigenous businesses though were ineligible for some of the early government assistance programs.

By late April the Canadian government announced it would provide $307 million in relief funding to Indigenous businesses. This included an emergency loan program worth $204 million to be delivered by NACCA and the Aboriginal Financial Institutions (AFI). A large number of Indigenous businesses had previously dealt with AFIs instead of banks for their financial needs.

There are 59 AFIs in Canada and 30 of those are assisting with pandemic response funding applications.

Metatawabin said his association does not have exact figures as to how many businesses had applied for emergency loans through the AFIs. The emergency loans, up to $40,000 each, includes a $10,000 grant if the other portions are repaid on time.

But Metatawabin said he has heard various AFIs have had quite a response.

“Once everybody knows the money is there, hopefully they’ll be applying for it,” Metatawabin said.

Though the number of Indigenous businesses across the country that have indicated they might close is staggering, Metatawabin is hoping that loans will allow the majority of them to remain open.

“We’ve tried to make the applications quite simple,” he said. “Hopefully they’ll be able to hang on and we’re going to get that money out to them.”