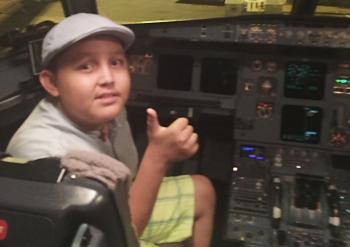 Space Camps are designed to inspire young people to study science, math and engineering by encouraging them to participate in tech programs, astronaut training and simulated space shuttle missions.

Delaney Kilgour, 12, from the Beaver Cree Nation’s Amisk School is heading to the NASA Space and Rocket, Robotics Academy.

The U.S. Space and Rocket Center’s space camps are held in Huntsville, Alabama. His mission runs from July 28 to Aug. 9.

How did he come to receive this exciting opportunity? Well, it all started way back, early in his school career, with a single book read to him by his teacher in Grade 1. That’s what set the course. It was a book about Buzz Lightyear, and the young Kilgour wanted to be him.

Buzz was an exciting space adventurer, while Delaney had his feet planted firmly on the ground. A heart condition kept Delaney from running, riding a bike or doing much exercise. He had surgery two years ago to help him get better.

When his Great Grandpa Francis Scanie came to visit, Kilgour and he would make rockets out of toilet paper rolls.  But it was his nurse at the Stollery Children’s Hospital that got him to lift off and attend the University of Toronto, Engineering and Robotics Summer Camp, and that’s where he learned about the NASA program.

He told his grandparents he wanted to go, and that’s when the fundraising efforts began with bottle collections, and babysitting family pets, and supervising kids in Kindergarten and Grade 1, where he earned $2.50 for each supervision.

The tuition for the camp was expensive, and his grandparents said he needed to raise the money himself if he really wanted to go, “which I did,” he told Jacob LeBlanc at Windspeaker Radio.

Delaney has no expectation that he will ever travel to the moon, but he wants to be a part of the robotics that might help others travel in space. He also has a goal of making robotic arms and legs for people who have lost limbs to such diseases as diabetes, especially for his Auntie Eileen Beaver from Fort Smith, N.W.T., he said.

He wants to go to Harvard or UCLA for their robotics programming and also take engineering.

Space Camp had its beginnings in 1982. It’s designed to inspire young people to study science, math and engineering by encouraging them to participate in tech programs, astronaut training and simulated space shuttle missions.

The program has been proclaimed by teachers and parents as highly creditable educational experience. Students from 70 countries attend the event.