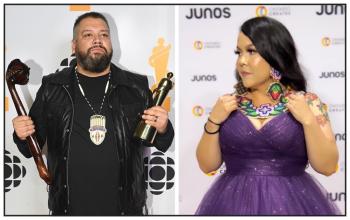 Fawn Wood is still trying to fully comprehend the magnitude of her latest accomplishment.

Wood, who has Cree and Salish ancestry and who lives in St. Paul, Alta., was in Toronto for JUNO Week and won the JUNO in the Traditional Indigenous Artist or Group of the Year category for her album kakike.

Her win was announced on the Saturday before the main awards ceremony on Sunday. The JUNOs recognize the best of the best artists on the Canadian music scene in various categories.

“I’m still getting used to that,” Wood said of her JUNO win during a phone interview with Windspeaker.com from her home on Wednesday.

This marked the first time she has won a JUNO.  “My music was submitted in the past,” she said. “But I was never nominated before.”

Wood released a debut solo album in 2012 titled Iskwewak – Songs of Indigenous Womanhood. For that effort, she was named Best Female Artist at the Native American Music Awards the following year. And her work earned her Best Hand Drum recording at the 2013 Aboriginal Peoples Music Choice Awards.

Wood also has various albums of duets with husband Dallas Waskahat, a Cree singer. The couple is part of a drum group called Cree Confederation.

Wood was one of five nominees in her category this year.

“I didn’t know what to expect,” she said. “But you have moments when you think it could be any one of us that wins.”

Wood’s first cousin Joel Wood was one of the other nominees. He’s a solo artist and also part of the celebrated Northern Cree Singers, a powwow/round dance group that has been nominated for numerous JUNOs and Grammy awards. The Grammys recognize excellence in the American music industry.

Young Spirit, another Grammy-nominated group from Frog Lake Cree First Nation in Alberta, was in the traditional Indigenous category, as were the Manitou Mkwa Singers from the Mississaugas of the Credit First Nation in Ontario and NIMKII & THE NINIIS, a group from Wiikwemkoong Unceded Territory on Manitoulin Island in Ontario.

Wood was thrilled she was able to take part in a variety of the events held in conjunction with JUNO Week.

“It’s a nice way to come out of the lockdown and shutdown,” she said, referring to years of pandemic restrictions put in place to limit the spread of COVID-19.

This marked the first year a pair of Indigenous categories were part of the JUNO Awards.

A Contemporary Indigenous Artist or Group of the Year award was also presented. That was won by Dan General, a Mohawk from Six Nations in Ontario, who goes by the stage name DJ Shub for his album War Club.

For DJ Shub, a DJ and producer, this was the second time he’s won a JUNO Award. He was previously a member of A Tribe Called Red, which won a JUNO in 2014, in what was previously called the Indigenous Artist or Group of the Year category.

“Oh my gosh,” DJ Shub said in his acceptance speech as he went onstage to receive his award this year. “This is a total surprise. I didn’t write a single thing so it’s a good thing I only have 30 seconds.”

“You make me work twice as hard,” DJ Shub said to his fellow nominees. “You guys are amazing.”

Wood and DJ Shub have actually worked together. The pair released a song called “Redfoot”, which was on War Club.

Wood is receiving considerably praise for kakike. Four of the songs on the 11-track album include collaborations with others.

“It is my favourite album,” Wood said.

She’s thrilled that by joining forces with others on her latest album allows her music to have a more contemporary flare.

“It opens it up to people who are not Indigenous to listen to it,” said Wood, who is expected to release another album this fall.

Wood is also pleased to see that there are now two categories for Indigenous artists at the JUNO Awards.

Both award categories this year were sponsored by the Indigenous Tourism Association of Canada.

“I think it’s a blessing and it was something that was a long time coming,” she said. “At one time it was illegal to sing our music. But this is the music that has been on this land forever.”