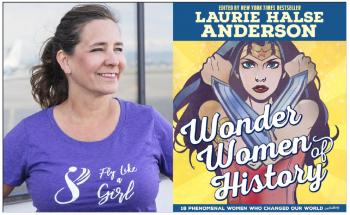 “Seeing my name there among some of the most successful and inspiring women of our time is surreal.” — Teara Fraser, founder and owner of Iskwew Air
By Sam Laskaris
Local Journalism Initiative Reporter
Windspeaker.com

Though she’s known about her inclusion in an upcoming anthology for several months now, Teara Fraser, a Métis woman who founded and is the CEO of her own airline, still finds it mindboggling.

Earlier this month, it was publicly announced that Fraser, who lives in Vancouver and owns Iskwew Air, would be included in DC Comics’ upcoming graphic novel titled Wonder Women of History: 18 Phenomenal Women Who Changed Our World.

Others profiled in the book, which is scheduled to be released on Dec. 1, include Ruth Bader Ginsburg, who is an associate justice of the Supreme Court of the United States, singer Beyonce, tennis legend Serena Williams and American politicians Elizabeth Warren, Alexandria Ocasio-Cortez and Rashida Tlaib.

“Seeing my name there among some of the most successful and inspiring women of our time is surreal,” Fraser said.

Fraser was first contacted about the project this past May.

Then Fraser put it out of her thoughts. “I had been interviewed for it back in June and had forgotten about it,” she said.

Earlier this month, however, Fraser was reminded of the project when DC Comics revealed the book cover and the names of the others who would be featured in its anthology. That was the first time she saw the list.

“Wonder Woman represents justice, kindness, strength and power,” Fraser said. “It's an honour to be named and my story featured in a Wonder Woman anthology alongside some of the most inspiring warriors of our time.”

The novel is available for pre-order now at https://www.dccomics.com/graphic-novels/wonderful-women-of-history

Fraser is hoping the book is well received.

“I want all those identifying as women to see examples of leaders who are dismantling oppressive systems, everyday super heroes that are working hard to co-create a better world, one that serves all peoples,” she said. “Actually, I want all peoples to see what is possible when wonder women step into their strength unapologetically.”

Fraser is also hoping others are inspired after reading the book.

“I hope people read these stories and are inspired to follow their dreams and do good in the world because everyone has superpowers, their own unique superpowers,” she said.

All of those featured in the novel were interviewed by different writers. The stories were then edited by New York Times bestselling author Laurie Halse Anderson.

Traci Sorell, a Cherokee writer who lives in Oklahoma, interviewed and wrote the segment on Fraser.

“I am humbled to share how Teara Fraser's life and work has inspired other Indigenous people to not only pursue careers in aviation but also to see how they can give back to their communities,” Sorell said. “She is truly a modern-day Wonder Woman.”

The segment on Fraser was illustrated by Natasha Donovan, a member of Métis Nation of British Columbia.

Fraser has never met Donovan, who also lives in Vancouver. But she was impressed with her work after viewing Donovan’s website and she plans to reach out to her soon.

Sorell is pleased Donovan, an artist she recommended, was able to illustrate Fraser’s story. “(She) partnered with me to create the beautiful artwork that depicts Teara’s impact on those around her,” Sorell said. “Hers is a story not to be missed.”

Sorell interviewed five others, including Fraser’s daughter Kiana Alexander-Hill for the story.

The others were Kaylee Willier, who is an Indigenous commercial pilot, Métis artist Lisa Shepherd, Heather Bell, who is the chair of the British Columbia Aviation Council and Mary Point, the manager of Indigenous relations at Vancouver International Airport.

Fraser, the first Indigenous woman to start up her own airline, operates out of the Vancouver airport. She launched Iskwew Air in March of 2019.

Iskwew is the Cree word for woman.

Like other airlines worldwide, Fraser’s business has been reeling since the pandemic hit earlier this year.

She’s tried to keep herself busy by taking part in a crowdfunding campaign, which has seen her make flights to deliver essentials to Indigenous communities in British Columbia.

Fraser has made three flights, servicing five communities through this venture. She was also hoping to make another flight this week but smoky conditions caused by forest fires on the west coast will prevent her from doing so.

“With the smoke it’s just not possible this week,” she said. “But we will do at least one more trip (at some point).”

Fraser is also hoping for a quick return to normalcy so she can resume regular flights for her business.

“It has picked up ever so slightly,” she said. “We’re definitely moving in the right direction but it’s going to take some time.”

Fraser is remaining positive and confident her business will eventually rebound and that it will become a success.

“That’s the plan,” she said. “I plan to look at this time and say ‘Remember when I started an airline and then COVID hit.’”

In other words, Fraser realizes she’s in a battle now but is confident she’ll come out on top.