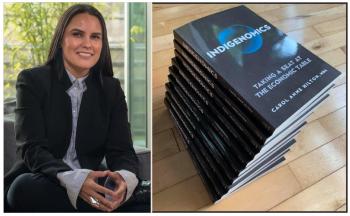 “This book draws heavily on the current media narrative to respond to the pervading myths of this country in regard to Indigenous peoples who are too often perceived as a burden on the fiscal system of this country.” — Carol Anne Hilton
By Sam Laskaris
Local Journalism Initiative Reporter
Windspeaker.com

Carol Anne Hilton, a member of Hesquiaht First Nation in B.C., is a force in Indigenous economic circles throughout the country. She has racked up a lengthy list of accomplishments while becoming an Indigenous business leader.

Her book, titled Indigenomics—Taking A Seat at the Economic Table, is scheduled for release on March 16.

“It’s been a couple of years in the development,” Hilton said. She started writing Indigenomics in 2018 when she spent one month at the Banff Centre For Arts And Creativity.

Hilton, who lives in Victoria, B.C., also wrote portions of the book at the East-West Center, located in Honolulu at the University of Hawaii.

Early indications are Hilton’s book, published by New Society Publishers, will be well received as pre-orders are the highest number in history for the company, which has both Canadian and American offices and has been around since the 1970s.

“I think the book is well situated in Canada,” Hilton said. “And I think it will become a success because it is a new concept.”

Hilton writes this concept is a move away from it “happened to us” towards a new “designed by us” approach.

Hilton is responsible for the creation and growth of the word Indigenomics. Besides becoming a new word, it has also transformed into a movement which focuses on not only building but also strengthening Indigenous economies.

Hilton earned her Master’s degree in Business Management from the University of Hertfordshire in England in 2004, via a partnership with Vancouver Island University.

She became the founder and CEO of the Indigenomics Institute, a platform focused on the economic empowerment of Indigenous peoples. The goal is to help Indigenous people formulate their own future and help them best understand the full potential of an emerging Indigenous economy.

Hilton, who is an advisor to various First Nations, businesses and governments, is also leading the push for what she is confident can become a $100 billion Indigenous economy in Canada.

Hilton believes the time has come for Indigenous people to take their proper seat at the economic table and that doing so will advance reconciliation.

Besides advancing the Indigenous economy, Hilton is also hoping her book will help change a perception of Indigenous people.

“This book draws heavily on the current media narrative to respond to the pervading myths of this country in regard to Indigenous peoples who are too often perceived as a burden on the fiscal system of this country,” Hilton said.

Instead, Hilton believes the time has come to view Indigenous people as potential economic powerhouses.

In the foreword for Hilton’s book, Ken Coates, the Canada Research Chair in Regional Innovation, writes that he’s a strong believer her message is one that needs to be heard.

“I am not sure Canadians are ready for the wisdom and insights of Carol Anne Hilton. But they had best adjust. She has emerged as one of the most articulate and creative commentators on Indigenous business and economic development in Canada and is widely respected for her forward-thinking analysis on the role of Indigenous peoples in the Canadian economy.”

Coates added Hilton is changing the perspective of how Indigenous people conduct business throughout the country.

“More than anything, Carol Anne Hilton provides an introduction to a revolution in progress. She describes the strength, commitment, and passion that is producing widespread Indigenous commercial success and that is rewriting the rules of Canadian business. Her work deserves careful attention as one of the most important books ever written in the integration of Indigenous culture and contemporary business.”

Hilton’s book is available for pre-order here or through Amazon or Indigo.