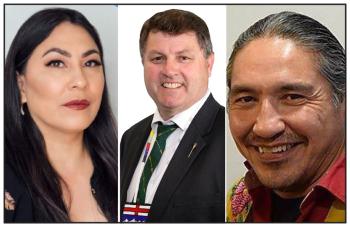 A new-look Cabinet for Alberta Premier Danielle Smith retains Rick Wilson as minister of Indigenous Relations. Wilson has held that position through various Cabinet shuffles since the United Conservative Party (UCP) was elected as government in 2019.

“I’m glad he remains the Aboriginal minister because of the relationship he continues to have and everything,” said Athabasca Chipewyan First Nation Chief Allan Adam, who commended Smith for keeping the position unchanged.

It’s that relationship that Stephanie Harpe, international advocate for Missing, Murdered and Exploited Indigenous People, also sees as a value to Wilson remaining in his position.

She says Wilson fills a “valuable space,” both in the public and with UCP members.

“He’s been very supportive to our community…He calls out his own internal space…(and) when he comes out to speak, that’s how he genuinely feels,” said Harpe.

Through the work of Wilson’s ministry, a Premier’s Council on Missing and Murdered Indigenous Women and Girls (MMIWG) was one of the outcomes of the provincial work undertaken to address the Calls for Justice delivered by the national inquiry into MMIWG. Wilson has also designated Oct. 4 as the annual Sisters in Spirit Day.

Adam sees Wilson retaining his position as a benefit for the Alberta Indigenous Opportunities Corporation (AIOC). The AIOC was created by former premier Jason Kenney as a way to backstop financial participation by First Nations and Métis in natural resource projects.

“I’d like to see that corporation continue to move forward, keep going, because it’s time now that the Alberta government look at First Nations to move those major projects,” said Adam. “It’s the only way we’ll be able to move the infrastructure forward if First Nations are heavily engaged and involved in ownership of projects.”

Wilson was also appointed to the Treasury Board.

“Industry and environment work hand-in-hand so she’ll have a good understanding about that department,” he said.

The new energy minister is Pete Guthrie, who, says Adam, needs to understand that work needs to “continue down the path” already established with Indigenous nations.

Harpe is pleased to see that there is now a minister of mental health and addictions. That role was previously undertaken by an associate minister.

“It’s critical. This is the need. The mental health has taken a huge hit in the last couple of years. We’re still not through it. It has affected every single person in a different way. That is definitely needed…When I teach people when it comes to safety…mental health is an issue and now more than ever,” said Harpe.

Nicholas Milliken is the minister for Mental Health and Addictions.

The associate minister position for Status of Women was replaced by a parliamentary secretary role to be filled by Tanya Fir.

Travis Toews, who was Smith’s last challenger in the final ballot for leadership of the UCP, has returned to his role of finance minister and president of the Treasury Board.

Other major departments to retain their ministers were Tyler Shandro in Justice, Jason Copping in Health, and Adriana LaGrange in Education.

Leela Aheer was the only leadership contender not to be returned to Cabinet. She had served as minister of Culture, Multiculturalism and the Status of Women.

Mickey Amery was appointed as new minister of Children’s Services, the position held by Schulz before she stepped down to run for leadership.

One of five new Cabinet policy committees created by Smith will focus on Alberta First, a pillar for Smith’s campaign that centred on the Alberta Sovereignty Act and Alberta demanding more autonomy from Canada. The committee is chaired by Garth Roswell.

Smith also created a Cabinet policy committee for social services, which will be chaired by Searle Turton.

Cabinet members will be sworn in on Monday morning.

“A new premier coming in makes Cabinet shuffles here and there…She has to make amends and please her constituents to make sure they can function as a government for the next eight months,” said Adam.

Albertans will go to the polls for a general election no later than the end of May 2023.

Smith is seeking a seat in Brooks-Medicine Hat on Nov. 8 in a byelection.