If cannabis has a role in harm reduction, why are costs not covered? 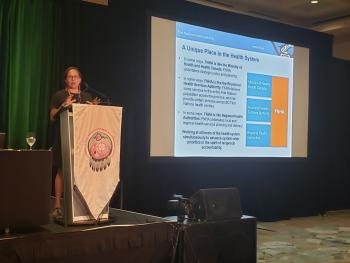 Studies indicate that cannabis may have a role to play in harm reduction and as an alternative to opioids, Dr. Nel Wieman, senior medical officer for the First Nations Health Authority (FNHA), told representatives on the second day of the Assembly of First Nation’s first cannabis forum.

If that’s the case, asked one delegate, why are costs not covered for medicinal cannabis under First Nations health benefits?

“I don’t understand why you’re doing this presentation when FNHA does not pay. If I didn’t have First Nations health coverage I would get it paid. So why are the Indigenous being left behind once again and not having the same rights as anybody else that has other health policies? Why are you not paying for it?” she asked.

Wieman replied that she didn’t work within the health benefits department of the FNHA nor was she there to address the issue of medicinal cannabis coverage.

“FNHA has committed to periodic reviews of the topic and will communicate to all First Nations across B.C. if our coverage changes,” said Wieman.

“I think all the chiefs need to get together and ask that question on a higher level because there’s no reason why we should all be treated as second class citizens once again,” said the delegate.

Research into cannabis benefits or harm reduction is a growing field, said Wieman, who pointed out that earlier research had been limited. Cannabis was only legalized last October.

“The implication, although it wasn’t necessarily clear from the methodology of this study, was that … it warranted further investigation as to people who use cannabis might mitigate the risk of fentanyl exposure among people who inject drugs,” said Wieman.

Fentanyl and other opioid-related deaths have impacted First Nations right across Canada in such high numbers that it has been called a crisis, with some bands declaring local states of emergency.

“Cannabis is viewed as a desirable potential alternative to opioids, alcohol and other illicit drugs and prescription medications,” said Wieman.

However, both Tsuut’ina Band Councillor Regena Crowchild and Dan Wilson, from the Okanagan Indian Band, said the bigger picture had to be examined.

“So all of this stuff that we do to prevent the hurt, whether it’s medicinal cannabis, whether it’s opiates, whether it’s alcohol, those are just symptoms of what is the real underlying issue of why our people are hurting. And I think that’s something we have to look at,” said Crowchild.

“We have to look at this from a holistic approach,” agreed Wilson.

While Wieman said knowing more about the potential benefits of medicinal cannabis will help in harm reduction, she also acknowledged what Crowchild and Wilson had to say.

“People use substances to change how they feel … one of the key issues we are looking to change (is) how we feel because of the historical, intergenerational, and contemporary traumas that we experience in our communities, as individuals, in our families, in our nations. So that underlying trauma, the different types of trauma, we need to take a holistic approach in trying to address that,” said Weiman.

Hundreds of delegates attended the two-day AFN National Cannabis Summit Sept. 4 and 5 in Vancouver, which looked at the latest information and research relating to First Nations and cannabis, including key issues in areas like jurisdiction over sales and regulation, health impacts, social development impacts and economic development.