‘I could have been one of these women’: Red Dress cross-stitch a work of love and support 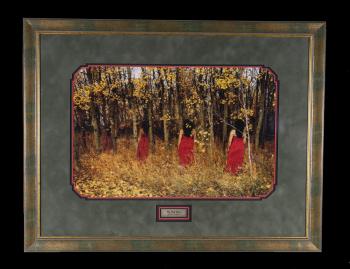 “I was really drawn into the forest and the grass, being tangled in there. I felt a link to the missing ladies, that they couldn’t find their way out.” — cross-stitcher Holly Stengel
By Shari Narine
Windspeaker.com Contributor

Unlike most cross-stitch pictures where stitching begins in the middle of the canvas, Katherain Lee was insistent that work on the Red Dress project, a photograph she charted for cross-stitching, begin on the left side of the canvas.

“What grabbed me about this photo was that (the woman) was walking into the forest and then she disappeared,” said Lee.

“I wanted to bring the lady out of the forest.”

The photograph that was turned into a cross-stitch piece, measuring 18 inches by 24 inches, was shot by AMMSA CEO and Windspeaker.com publisher Bert Crowfoot.

Crowfoot was one of a small group of Canadian photographers who contributed a total of 181 photos to the Red Dress photograph project in 2015, which was begun by Edmonton photographer Mufty Mathewson as a way to honour the (at-that-time) 1,181 missing and murdered Indigenous women.

“I was amazed at the amount of work (Mathewson) did and wanted to be a participant. I asked a friend, Knowla Le’Cree, if she wanted to help create an image to honour and remember missing and murdered Indigenous women. I had this image of a woman in a red dress vanishing into the forest, so we went out to a grove of trees and shot a series of images to create this final image,” said Crowfoot.

At the top of Crowfoot’s mind was the missing daughter of a close friend. The daughter had been missing for more than 15 years.

Crowfoot was approached in early 2017 by long-time friend Elda Hoevers to turn his photo into a cross-stitch. Hoevers asked Lee, also a friend, to do the work. Lee had created more than 600 needlepoint patterns. 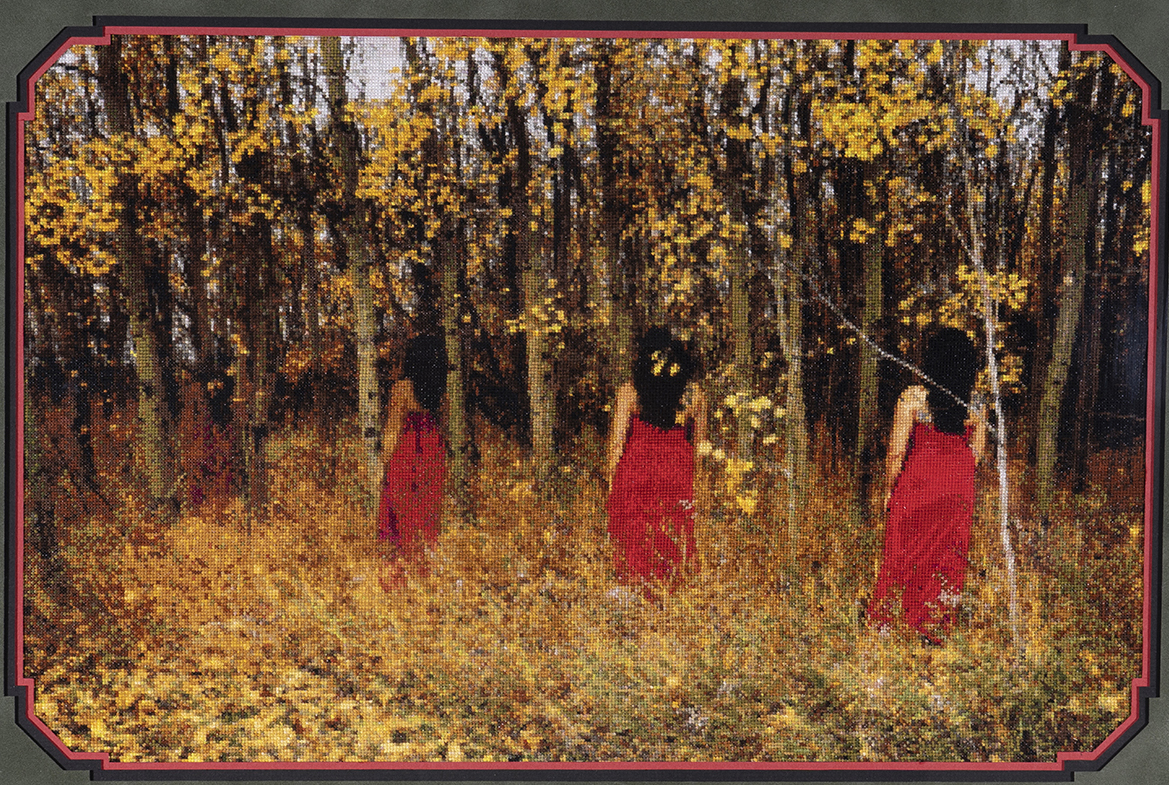 The photographs spoke to Lee.

“I grew up with violence in the first 15-20 years of my life. I could have been one of these women,” she said.

Lee began her creation using a computer program, but then she added details by hand. Initially, Lee charted the work with 100 colours. She ended up working with 75 colours. As every square inch required 360 stitches, a lighted magnifying glass, similar to what is used by dentists, was needed.

Initially, Lee says, she was going to take on the project by herself, but members of the Needle Bugs, the group that meets monthly at her west-end shop Frame Corner, suggested they do it together. The canvas, 15-page pattern, and threads were passed among the 11 women who worked on the project over the course of two years.

Holly Stengel, who lives in Penticton, was one of those women. Knowing that many of the other stitchers wanted to work on the red dresses, Stengel devoted her time to stitching the grass with its multiple shades of golds, browns, beiges, tans and whites.

It was a spiritual experience, she says, somewhat different than the other women, many of whom saw spirit animals.

“I was really drawn into the forest and the grass, being tangled in there. I felt a link to the missing ladies, that they couldn’t find their way out,” she said.

She also recalls spending hours and hours stitching and feeling as if she had made no progress.

Stengel had three passes at the canvas, all during 2018. She was the woman to do the last stitching.

“I had a huge sense of urgency,” she said, needing to get the work finished.

After each Needle Bug did her work, the canvas was returned to Lee, who stitched on it before sending it to the next Needle Bug.

“It felt really hard at times. It was a struggle,” she said. “But when I look at the picture, it’s so beautiful. It means so much.”

“I was amazed and blown away at the detail and quality of the final image. Looking at it from a distance, it looks like a photograph, but as you look closer, you can see the individual stitching in the image,” said Crowfoot

The experience has been a meaningful one for him.

“I tried to speak to the group of stitchers at the Deer Valley Meadows Camp, where about 50 individuals were gathered to stitch for five days. I got really emotional and had to give the mic back to Katherain to finish reading the piece that accompanied the stitched image,” he said.

The framed cross-stitch has been purchased by Crowfoot’s brother, Deb.

“This is really a stunning piece. It’s something that needs to be displayed,” said Deb Crowfoot, who plans to rotate it among his dentistry practises in Maskwacis, Frog Lake, Onion Lake, Enoch, Saddle Lake, Morley, Siksika, La Ronge, and his soon-to-be-opened office in Kehewin. All his offices have Indigenous artwork and, he said, he would also like to include his brother’s photograph.

Deb says this piece speaks to more than the women who are missing, noting that the $5,000 purchase price will be donated to help women in shelters.

“It’s to help the women out now and also in memory of the missing women of the past,” he said.

That’s something Lee can get behind, a tribute to both those who have passed on and those who continue the often-times difficult path. 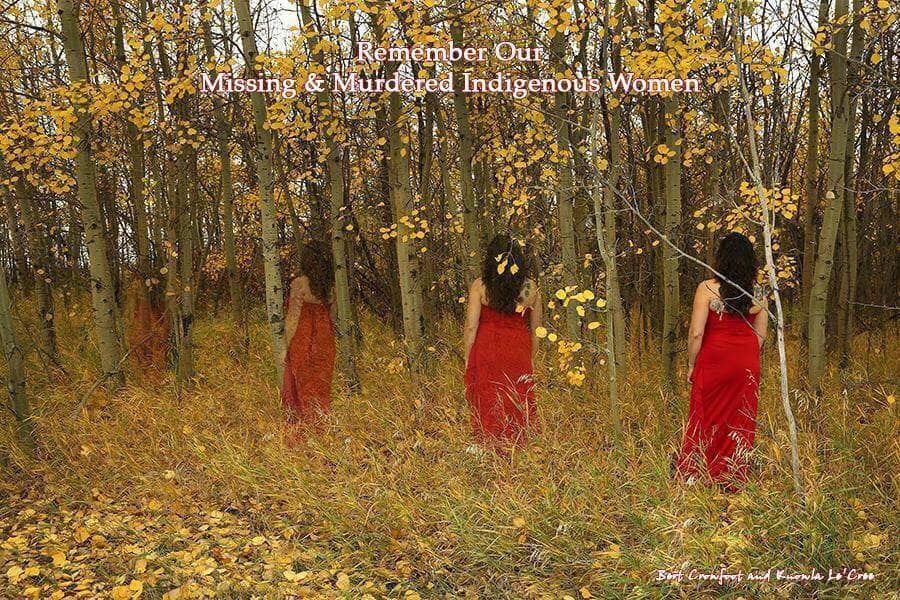