Huge turn-over on Metis Nation of Alberta council, but Poitras remains as president 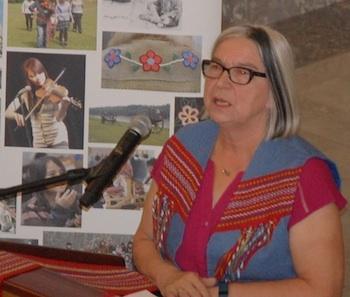 Audrey Poitras admits she is surprised by the margin of victory she had over her sole challenger for the position of president for the Metis Nation of Alberta, but she is not surprised that membership says they want to keep the MNA moving in the same direction.

In the unofficial count, Poitras, who has been president for the past 22 years, claimed 2,313 votes to Ron Quintal’s 1,475 in the province-wide election held Sept 18.

With one polling station still to come in Quintal’s home region in the northeast where he serves as president of the Fort McKay local, Quintal had scored only one more vote than Poitras. According to the MNA website, “results for the Region One Boyle Polling Station (1-7) were locked before the results were called in.”

Quintal says while he’s a “little worn out” from the lengthy campaigning, he’s not surprised by Poitras’s numbers, province-wide or in Region One. He says he’s also not surprised that some of Poitras’s more vocal critics over the past years – Diane Scoville, Corey-Ann Morin, and Dean Lindsay – didn’t win either.

“The Nation just isn’t ready for change,” said Quintal.  “Because of where we are as a Nation and the fact that we’re at the table, I think a lot of people were afraid of taking the Nation in a different direction because we have Canada and Alberta at the table having negotiations.”

Poitras sees the victory as an endorsement for the direction she is taking the MNA.

“Our community is saying continue doing what you are doing because I believe they want to see us keep moving forward,” she said. “With our agreements with Canada and Alberta, it’s about recognition and it’s about continuing to move that Nationhood position forward.”

But despite the new four-year mandate Poitras has received, Quintal says he will keep pushing Poitras to fix the deficit that made him run for president and which he campaigned strongly on: the lack of grassroots and community involvement in decisions.

“I hope and I pray that Madame Poitras does better to ensure that those communities are engaged in the overall process in moving the Nation forward,” said Quintal, who promises to remain an “active lobbyist.”

Poitras argues that she is already doing that and says particularly in the last year with more funding and more opportunities, there have been more consultations in a variety of areas, including harvesting, duty to consult, and the Constitution. She also notes that that meeting at the annual general assembly in Lac La Biche was one of the best attended. Membership, she points out, has risen to over 37,000, a steep climb from the 10,000 only a few years ago.

“I do believe we are communicating with our people and they are returning and speaking out,” she said.

“The fact that we managed to get 1,400 votes out in this election for the cause of change, we almost beat the entire turnout from the last election,” Quintal said.

He says he will remain active with the MNA and is hoping to move forward positively with the new Region One president Jimmy Cardinal and vice-president Jason Ekeberg. Quintal is president of the Fort McKay Metis Community Association (not affiliated with the MNA), which recently purchased land from the province for community and economic development.

“I still have a lot of work to do in my region and in my community and I really look forward to that,” said Quintal. “If there’s an opportunity to ensure the Nation can be successful I look to play a part.”

Despite what was a long and sometimes a bitter campaign, both Poitras and Quintal say they respect each other.

A good portion of the MNA provincial council is new. Siting presidents were challenged by vice presidents in three of the six regions (including Region Four, which saw both the incumbent president and vice president lose) and regional executive sought provincial positions. Poitras says some of the vice presidents felt they had the experience to move up.

“We have a huge turn-over in our council. But new ideas are always good,” she said.

Poitras is pleased to have Dan Cardinal as new provincial vice president, a position which had been sitting vacant. Poitras came to Cardinal’s support in March when he was dismissed as Region One’s vice president by then-President Diane Scoville. Scoville was defeated in this election.

All provincial and regional presidents and vice-presidents receive full-time salaries, although the amounts vary between regions. Poitras’s and Cardinal’s salaries are set by the provincial council. Core funding from the federal and provincial governments comprise the majority of the salaries.