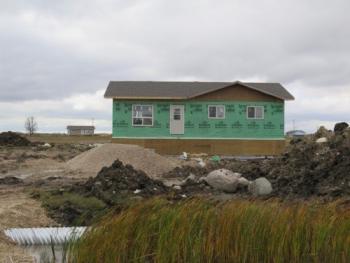 “I don’t know where the housing money is going, because we’re not getting it (and) I’m not the only community in B.C. that’s been saying that.” —Chief Jackie Thomas of the Saik’uz First Nation
By Shari Narine

“It would just get more complicated if they do include water,” said Thomas, chief of the Saik’uz First Nation.

In a pre-election promise, Prime Minister Justin Trudeau committed to getting rid of all boil water advisories on reserves, targeting public water systems and not private wells. Thomas is okay with that.

“We’ve got to start somewhere. If we can get at least the public ones done, then maybe we can focus on the other. But at some point they all have to be safe,” she said.

Thomas knows about safe drinking water. The Saik’uz First Nation in central British Columbia was one of those reserves that had safe drinking water – both public system and private wells – before Trudeau came into power. However, there are periods in the spring and fall when coliform (fecal matter) is a concern and then the system needs to be bleached.

“We’re fortunate and it’s the ones that aren’t that I feel need that support. That’s why I was involved in that motion. They deserve (safe drinking water), too,” she said.

Thomas is pushing for First Nations to lead that charge, saying that First Nations have a higher standard than either provincial or federal governments.

“We’ve felt the cumulative effects of poor water management in our territories. This is not just the reserve. This is the whole land base,” she said.

There was a time when a cup dipped into a running stream produced a drink of cool, fresh water. Now, says Thomas, that same water is impacted by industry, ranches and fertilizers.

But while safe drinking water isn’t a concern on Saik’uz First Nation, housing is.

“We’re about 20 years behind on our housing situation. Same thing with infrastructure,” she said.

When Saik’uz First Nation built four houses on reserve in 2012, it was the first new housing in almost two decades. In 2016, funding came through for six more units and this year saw funding for four more.

“I don’t know where the housing money is going, because we’re not getting it (and) I’m not the only community in B.C. that’s been saying that. That’s why we were so excited when they were talking about new housing funds,” said Thomas.

The 2016 federal budget provided close to $417 million over two years for housing on reserve, while the 2017 and 2018 budgets proposed $600 million over three years for on-reserve housing.

Saik’uz First Nation has one 10-unit apartment building. Thomas says they have put in applications for funding for “little houses,” in light of a 2012 survey that showed about 40 of their members were “couch-surfing.” She doesn’t believe that figure has changed much.

Work also needs to be done on existing homes which face a number of challenges, including mould and bats.

Thomas says Saik’uz First Nation will be turning some of its housing focus to off-reserve members. With a membership of about 1,000 people, 65 per cent to 70 per cent live off-reserve, many in run-down accommodations in the “not usually best part of town.”

While Saik’uz First Nation thinks about providing off-reserve members with better accommodations, the Grand Council of Treaty 3 is trying to help members who want to return to their First Nations communities.

“There are people who would like to come back to the community, but there is a housing wait list,” said Debbie Lipscombe, social policy analyst with the Grand Council of Treaty 3, situated along the northern superior portion of Ontario, spanning west of Thunder Bay to the north of Sioux Lookout.

They also face another challenge. Shooniyaa wa biitong, a human resources training organization, places members to work on housing projects and gain skills, but apprenticeship guidelines in Ontario make it impossible for them to advance.

“People get hired, do learn the skills around construction, but they’re not actually able to go across those levels to get journeyman papers. So people take training but it doesn’t lead to the higher salaries,” said Lipscombe. This means they can’t operate their own businesses or have marketable skills outside the community.

“The Ontario apprenticeship guidelines don’t meet the reality of these housing projects.”

This is an issue Lipscombe would like to see included on the AFN’s housing forum agenda.

Another item she would like to see added to the agenda is that of “multifunctional” houses.

“How can that house be multifunctional in the sense that right now it doesn’t need to be wheelchair accessible, but 10 years from now it may need to be?” said Lipscombe.

The forum is giving voice to New Zealand and United States representatives, perspectives that Lipscombe says could be valuable.

“It’s always nice to have that opportunity to learn what other people are doing, to look at best practices,” she said.

Lipscombe says that until Windspeaker.com contacted her, she wasn’t aware of the AFN’s housing and infrastructure forum scheduled for Oct. 29 to Nov. 1 in Vancouver. She says she has encouraged representatives from the Bimose Tribal Council and Advisory Services out of Fort Francis, which provide housing services to Treaty 3, to attend.

Thomas says she heard about the forum earlier in the week. While she won’t be attending because of previous commitments, she says there will be at least one representative from Saik’uz First Nation there.

And while she understands it may be practical to focus the forum, she also says more needs to be done.

“You can build houses but if they don’t have water or a secure water source, we’re just continuing what’s been done by (Indigenous and Northern Affairs) in the past,” said Thomas.