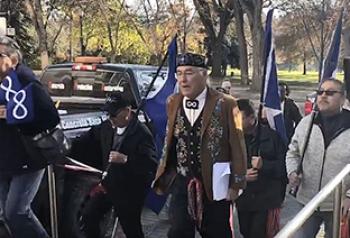 Legal services for the litigation is being carried out by Clement Chartier, who is seen heading into court to file the statement of claim Oct. 16.

Plaintiffs say ancestors were deprived of land or money that was promised by the government through the scrip system in 1886 at Lac La Biche; in 1899 in Fort Chipewyan, Fort McMurray and Athabasca Landing; and in 1906 and 1907 at Ile a la Crosse and Portage La Loche and La Loche Mission.
By Shari Narine
Windspeaker.com Contributor

Legal action filed Wednesday morning in a federal court in Saskatoon is about getting the attention of whatever party forms the next federal government.

“There is no price tags put on this for what we’re looking to get back from the government at this point,” said Ron Quintal, president of the Fort McKay Metis Community Association, one of nine organizations named in the court action as plaintiffs. “We’re more concerned about the declarations, and basically getting to an open table with the federal government.”

Among the declarations being sought is that the honour of the Crown was not fulfilled in the creation, implementation and supervision of the land scrip system “and distribution imposed on the citizens of Metis Nation” in the 120,000 sq. km region that spans the northwestern part of Saskatchewan and northeastern part of Alberta.

Quintal’s name is among the 50 or so individuals who are descendants of Metis who applied for land scrip at Ile a la Crosse and La Loche in Saskatchewan and Lac La Biche and Fort Chipewyan in Alberta.

Quintal says the group is not asking for the entire land mass, which encompasses two Metis settlements in Alberta (Buffalo Lake and Kikino) and Dene and Cree land, and which is rich in resources.

“We definitely honour the First Nations treaties they have with Canada. This claim in itself is in no way in anyway to take away from the First Nations’ ability to exercise their inherent rights. From our perspective it’s more so about the Metis and our ancestry being able to exercise that and educate the federal government on how we were treated,” said Quintal.

According to the 31-page Statement of Claim, the plaintiffs are the descendants of Metis who were part of the Metis Nation Homeland and who were wrongfully deprived of land or money that was promised to them by the government of the time through the scrip system in 1886 at Lac La Biche; in 1899 in Fort Chipewyan, Fort McMurray and Athabasca Landing; and in 1906 and 1907 at Ile a la Crosse and Portage La Loche and La Loche Mission.

However, “the certificates for scrip issued by the Commissioners, and the scrip coupons subsequently issued by Canada, did not, and could not, provide a means for the Metis represented by the Plaintiffs or their ancestors to secure the land and resource base, which they needed and were entitled to, in order to ensure a secure collective future in the Claim Area, because scrip could not be redeemed for land … because it was not surveyed and open for homesteading, coupled with the fact that the scrip coupons were delivered directly to the third party speculators.”

The group is also looking to negotiate “a mutually agreeable land claim agreement” which will lead to self-government.

Quintal stresses that litigation was not the descendants’ first choice, although some sort of action had been discussed for well over a decade.

It was the Trudeau government’s talk about reconciliation and the Daniels’ decision putting Metis under federal jurisdiction that made Quintal optimistic about coming to a negotiated settlement.

“It picked up steam under the Liberal government, and the fact that they were prepared to speak to the Metis Nation as it is. That was one of the reasons we tried to engage with the federal government directly on negotiations… unfortunately they weren’t prepared to do that,” said Quintal.

In 2017, when the Trudeau government began talks with the Metis Nation of Alberta, Quintal says Metis who had split from the MNA had wanted a place at the negotiation table, too.  The federal government said it would only deal with the MNA. The same held true with those Metis citizens and associations that had split from Metis Nation—Saskatchewan.

Quintal insists that his group didn’t want to take away from what the MNA or MN—S were negotiating, but wanted to pursue its own course of actions and settlements.

“The biggest thing from our perspective (and) why we’re doing it completely separate from Metis Nation of Alberta and Metis Nation—Saskatchewan, is that (our) communities have a direct voice,” said Quintal.

“We organized the communities and felt (litigation) was the only way we could get in front of the federal government.”

While the action is being taken against the federal government, Quintal says the Saskatchewan and Alberta governments may choose to get involved as the land in question was transferred to the provinces by Ottawa.

However, he stresses it’s the federal government the plaintiffs take issue with.

Legal services for the litigation is being carried out by Clement Chartier, who also serves as president of the Metis National Council (MNC), and Dwayne Roth, who is corporate counsel for the Fort McKay Metis Group.

Quintal points out that none of the plaintiffs in the case are affiliated with either the MNA or MN—S, which are member governments of the MNC. The descendants say they all meet the definition of Metis as defined by the MNC.

Quintal says papers were filed prior to the federal vote as a “call out to whoever will form government.”

However, he admits, he is wary.

While a Liberal government has “an appetite to engage with Metis through reconciliation, through negotiation tables … (with) a Conservative government it’s always been a litigation factor for Indigenous communities. At the end of the day it depends upon who forms government and we’re going to have to strategize after the election,” he said.

Metis who are descendants with scrip claims are invited to join the legal action.