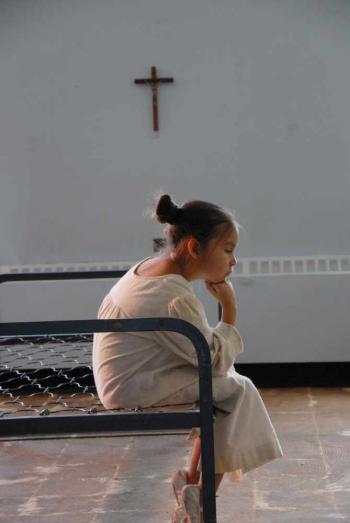 Holy Angels is a film about the children who went to residential school as much as it is about the generations that followed.

Wandering Spirit was six years old in 1963 when she was hauled away in a snow machine to Holy Angels residential school.

Villeneuve met Wandering Spirit in Edmonton when he worked to video-record private statements from residential school survivors for the Truth and Reconciliation Commission.

He “felt a connection to her right away.”  Wandering Spirit reminded him of his grandmother Florence Cardinal, who had recently passed away.

Florence attended residential school in Wabasca and was also “really religious” like Wandering Spirit, said Villeneuve, also hails from northern Alberta, having grown up in Slave Lake, moving there at a young age from High Level.

Villeneuve admits he wasn’t thinking of producing a documentary when he started video-recording the survivors. After hearing the stories, he was often overcome with hate and anger.

“After I finished working with TRC, I was hoping that I’d just be done with residential schools for a while. But I just had this idea and it was in me and I thought, ‘Okay, I need to do it,’” he said.

And so he did, but with a unique approach.

“I wanted to tell the story in a different kind of way. Not just a documentary film. I wanted it to be more of like an art, a dance piece, sort of like a ballet, a residential school ballet,” he said.

Wandering Spirit’s story had resonated with him and he reached out to her. She was willing to tell her story again. But the process wasn’t smooth sailing.

When Villeneuve travelled from his home of Vancouver to Fort Chipewyan to start recording Wandering Spirit’s story, she took ill, ending up in hospital in Fort Chip and then eventually in Fort McMurray. Villeneuve spent the time in Fort Chip filming different aspects of the torn-down residential school, as well as the original church and priests’ residence, which are still intact.

He ended up making a return trip from Vancouver to northern Alberta, filming Wandering Spirit in the basement chapel of the Fort McMurray hospital. Villeneuve gently guided her through her story, but mostly let her tale flow naturally. Four hours of recorded material had to be edited to fit the 14-minute film production.

“It’s not a piece where I feel real negative and hateful emotions after I watch Holy Angels,” said Villeneuve.  “What I liked about this is. It’s kind of a hopeful piece.”

That hope comes from Wandering Spirit telling her stories and laughing, being resilient and strong; traits of a “beautiful people.”

Holy Angels is a National Film Board of Canada production. Phoenix Alec, who portrays Wandering Spirit as a child, is an integral part of the film. She too was six years old when she went to Mary’s residential school in Mission, B.C., but her time there was to dance for the film.

Alec is studying ballet and is also a jingle dress dancer, who is being “raised right” by her parents; a “beautiful child and she’s going to grow up to be a beautiful person.  There’s hope that way with the children today,” said Villeneuve.

Villeneuve wants Holy Angels to inform audiences about residential schools, something he says Canadians are still ignorant about despite the work of the TRC and the commission’s eventual 94 Calls to Action which came in late 2015.

“I’m not a big fan of the word ‘reconciliation.’ So it’s not my hope that it can lead toward reconciliation. That’s not it at all. It’s more about people just having a little bit more of an understanding, another story, another piece of the puzzle of this whole residential school thing and what happened to First Nations people. It’s history that should be known by everyone,” he said.

Villeneuve says it is important that Indigenous people tell their own stories, especially painful ones like Indian residential schools.

“It’s imperative right now. We’re here as filmmakers. We’re able to tell our stories and write them and produce them, direct them, shoot and edit them. It’s time now for us to just do that with our stories. To take them over and tell them from our point of view,” he said.

Villeneuve is Cree/Métis. He graduated from the Indigenous Independent Digital Filmmaking Diploma Program at Capilano University in BC, and was selected to take part in the inaugural Whistler Film Festival Aboriginal Filmmaker Fellowship in 2013.

From a young age, Villeneuve was both in front of the camera (including a role in The Revenant) and behind the camera. He says acting and directing are “equally exciting.”

Holy Angels shows at the Edmonton International Film Festival at 4 p.m. on Sept. 30 at Landmark Cinemas 9 City Centre as part of the STUDIO A:  Programme 4 short films.