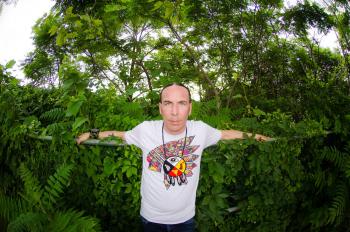 “…we are all chiefs, whether you’re male or female, two spirted, we are all kings and queens and we deserve to be respected…” — David Strickland
By Crystal St.Pierre
Local Journalism Initiative Reporter
Windspeaker.com

Toronto-based, award-winning, Indigenous record producer and engineer David Strickland is set to release Spirit of Hip Hop: Elements on Aug. 26. It’s a continuation of his 2020 project Spirit of Hip Hop.

“It’s an extension of the first album, but I wanted to do it a little different, so I gave it a different theme—the elements,” said Strickland.

Strickland, who has worked with such notables as Drake, Erick Sermon, EPMD and Jully Black, not only produced the Elements album, he wrote the music, with contributing artists providing their own lyrics. Some of those teaming up with Strickland are Drezus, Wolfcastle, Jace Martin, Violent Ground, Choclair, Que Rock and Crystal Shawanda.

There is a mix of well-known and up-and-coming artists who Strickland has met along his journey.

“It’s a balance of Indigenous artists with non-Indigenous… That’s kinda the concept, is to bridge the gap and bring the two together,” Strickland told Windspeaker.com.

One song, titled “Stand Up”, was recorded during a retreat where Indigenous industry leaders mentored immerging Indigenous artists.

“We watched their performances and listened to their songs and then critiqued them and shared personal stories,” said Shawanda, who worked alongside Strickland as a mentor for the project. “While we were there, it was a really awesome mix of people, and everybody started writing together and collaborating. I think that was the coolest thing about it.”

Shawanda and Strickland said they never leave home without their portable studios and recording equipment. Something they said they were grateful for during the retreat as the artists had such great chemistry together that they began to write and create music.

“There was so many talented artists there, and some of us just kinda worked on songs after hours and that’s where that song “Stand Up” came from. It was so organic,” said Strickland. “When we did that song, I wasn’t planning on doing another album …. Sometimes you just want to make music.”

But the second album did develop, and Strickland said the 14 tracks will take listeners on a journey.

Lyrics touch on an array of topics, including politics, culture, communities and relationships.

“The song “Certainmans” is a comparison between the hood and the rez,” explained Strickland.

“Really, what we are getting at there is this is a life some of us are forced into or, you know, we don’t feel like we have any other options…We are not trying to glorify it. We are just telling our story of how some of us had to live. And some of us have escaped, but not everyone is lucky to escape those lifestyles.”

Strickland, 49, said throughout his life he has been exposed to a lot of sadness and hard times, including the death of a lot of close friends.

Growing up in the neighbourhood of Scarborough, a district of Toronto, Strickland said he was friends with a lot of people from all over the world.

“I’ve been blessed to be in neighbourhoods where people really care about you,” he said, adding he grew up listening to hip hop and had a real passion for DJing early on in life.

Even though he grew up in a big city and really didn’t know his own heritage or Indigenous background, most of his best friends were a “bunch of city Natives”, including artist DJ Shaman.

“We grew up on hip hop and DJing. I learned about music through DJ (Shaman) and that’s really how I got into music was through DJing.”

Music has led Strickland, who is of the Qalipu Mi'kmaq First Nation, to learn about his Indigenous ancestry which has taken him back to a home he wasn’t really exposed to as a child.

Several years ago, he said he felt a pull to uncover his true identity. He always knew his father was Indigenous, but it wasn’t something they spoke about.

“My dad would tell us things, but wouldn’t tell us a lot,” he said. “They (his parents) were kinda brought up with a lot of shame and kinda hid who they were.”

About seven years ago Strickland began to connect with mentors within his community who encouraged him to begin participating in ceremonies. So he did.

They taught him about his culture and heritage, while providing him with “a safe space” to “allow him grow.”

He compared the beginning of his journey to “pulling one string” and ending up with a whole bunch more.

Strickland said the experience was so grounding that he began attending sweats weekly and is now a pipe carrier.

“I try to keep a balance with that because I found it really affected my spirit and it really kept me grounded and I wished I was doing that as a child,” he said.

“I can’t stress the importance of the medicine and how well it grounds you in many ways.”

The ceremonies also broke a very long hiatus he had taken from creating visual art.  He hadn’t painted since high school. There was no particular reason for that, he said, other than it just wasn’t part of him for so many years.

“The ceremony was really what did it for me, and the sweatlodge, and that’s what brought my painting out,” he said.

“A lot of my artwork came from sweating. Like I was painting before, but I didn’t paint for years. I painted at the end of high school, but when I started doing ceremony all the time the paintings started coming back.”

Today he is recognized throughout the art world and his work has been displayed at major galleries, including the McMichael Canadian Art Collection in Ontario.

Strickland created the art for the new album cover.

The illustration “reflected what I am saying, and the purpose of that image is displaying we are all chiefs, whether you’re male or female, two spirted, we are all kings and queens and we deserve to be respected and acknowledged for that. So, shout out to everyone who is on the album,” he said.

As his journey continues, he said traditional dance keeps coming to him, even though he has never done it before.

“It’s something that keeps calling me lately, is this need to dance. I’m not sure why yet but we are still exploring that,” he said.

Strickland hopes by sharing his own journey, both through his art and through his music, he will inspire others to begin to look into their own heritage.

“I mean, that has connected me to so many other people in my life now that I couldn’t imagine if we didn’t have that mutual bond. What would have happened? You know what I mean? It’s crazy. It’s really a beautiful thing.”