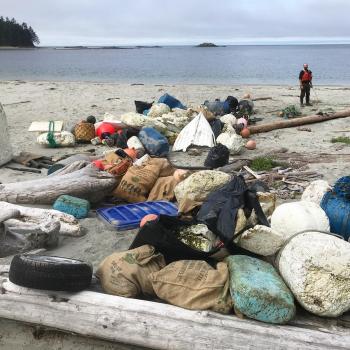 The West Coast of Canada will get a solid cleanup with the help of First Nations. On Friday, the government of British Columbia awarded $1.33 million to the Coastal First Nations-Great Bear Initiative (CFN-GBI) to carry out the work under the Clean Coast, Clean Waters Initiative Fund. It’s part of a pandemic response and job creations strategy.

“It’s important because you have to come to see with your own eyes how much marine debris is compiled on the outer shores of the coast. It’s actually astonishing to see how much debris there is,” said William Housty, integrated resource management department board chair for the Heiltsuk First Nation. It’s one of the nine Indigenous communities represented by the CFN-GBI. The Heiltsuk are located in and around Bella Bella.

The other First Nations in CFN-GBI are Wuikinuxv, Kitasoo/Xaixais, Nuxalk, Gitga’at, Metlakatla, Old Massett, Skidegate, and Council of the Haida Nation.

“There’s actually lots of heavy plastic and abandoned fishing nets that have drifted in, and there’s still lots of debris out there from the tsunami several years ago in Japan,” Housty said, adding that other materials often found are pieces of garbage that have been blown off vessels in the wind, or items they’ve intentionally littered overboard, as well as fishing buoys, old nets, and remnants of small vessels that have been abandoned or sunk, among other things. Some of the items he’s seen have had Japanese symbols on them, which is why he and other crew members think they may have come from that far away.

This is the second round of funding under the Clean Coast, Clean Waters initiative. The first round went to small ship tour operators, and the Wilderness Tourism Association. They managed to clean up a large area, but it was important for the government to bring First Nations on board because they have access to more remote areas, according to a government briefing.

And those crews working on the first round of clean up were sometimes even barred from going into certain areas on the coast because of the local First Nations’ protocols around those places (some were old village sites, for example). So it made it even more important to have First Nations aboard the project.

And at least 50 jobs will be created within the First Nations communities.

“It’s providing a good short-term opportunity for community members and all the communities on the coast to have the opportunity to make a little bit of money for their pockets and their families, and it’s provided a good opportunity to have some relief from the tough times we’ve all been going through with COVID,” said Housty.

In Bella Bella, it’s even become a youth work opportunity, as well, he said.

“I was just down there this morning seeing the crew off, and they have three youth that are on the project. Not only are they part of the clean up, but they’re also mentoring with some of the skippers on the boat, and learning a bit about the territories and navigating,” said Housty.

The areas identified by the Nations will be in large part key areas for traditional food harvesting. Examples of these foods are seaweed, mussels, barnacles, salmon, herring, herring eggs, abalone, and crabs, said Housty.

Chief Marilyn Slett, president of the CFN-GBI, adds that clean sweep will ultimately prevent microplastics from being formed by the debris picked up. According to the David Suzuki Foundation, microplastics are the result of plastic items breaking down into smaller and smaller pieces. They don’t actually biodegrade. They just become smaller until they’re not visible to the human eye. And they have a serious, and detrimental effect on animal and plant life in the ocean which absorb and ingest them.

“The CFN’s Regional Monitoring System, which ensures a standardized approach to data collection for monitoring coastal regions, will be used to track efforts and collect information on what is removed,” Slett said.

A quick fact from the BC government press release states that it’s been estimated that one garbage truck of plastic waste enters the ocean every minute, totalling eight million tonnes every year.

And in 2019, the Great Canadian Shoreline Clean-up (a national initiative) removed 163,505 kilograms of shoreline debris in Canada, which was a 47,076-kilogram increase from 2018. Just under half of that was collected on BC shores.