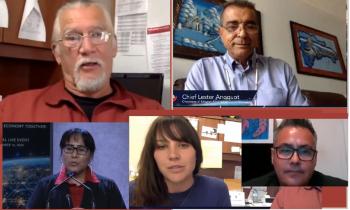 Even the most acrimonious relationships can be repaired.

Regardless of what was said and done in the past, such relationships can be mended and even go on to flourish.

This was evident during one of the presentations at the Business Recovery Forum hosted by the Canadian Council for Aboriginal Business (CCAB) Sept. 16.

Panelists for the presentation, titled Progressive Aboriginal Relations, included representatives from Bruce Power, the operator of the Bruce Nuclear Generating Station, located on the shores of Lake Huron in Ontario, as well as the chiefs of two First Nations.

Members of Chippewas of Saugeen First Nation and Chippewas of Nawash Unceded First Nation had been at odds with Bruce Power officials for several decades over its station and the production and storage of nuclear waste on their territories.

But during the CCAB presentation, which was held online because of the pandemic, the talk focused on the harmonious relationship that now exists between the two Nations and Bruce Power officials.

“Over time, and through a lot of hard work, people found the time to sit across the table from one another,” said Kathleen Ryan, the acting manager of the environment office for Saugeen Ojibway Nation (SON), which consists of both the Saugeen and Nawash Unceded First Nations.

These cordial discussions have resulted in numerous partnerships, including one signed last summer which saw Saugeen and Bruce Power officials agree to join forces and market new isotopes in the fight against cancer.

Saugeen’s Chief Lester Anoquot is among those pleased to see a workable partnership has been forged with Bruce Power. Construction on the nuclear generating station began in 1969.

“We weren’t even part of the consultation when the facility was built,” said Anoquot, who first became a member of Saugeen’s council in 1990. “A lot of times we found ourselves talking through our lawyers.”

But Anoquot said such is not the case any longer. In fact, the relationship between officials from Bruce Power and his First Nation extends beyond the boardroom.

“We’ve humanized our relationship with interactions and not just business meetings,” he said, adding officials have attended sporting events together and have also had dinner meetings.

Anoquot does not believe his First Nation is being taken advantage of these days.

“We’re now being consulted and accommodated,” he said.

The parties will also join forces to create economic opportunities by establishing a new isotope infrastructure.

“It will certainly be an economic boom to the community,” Anoquot said. “They will see some revenues from it annually.”

Anoquot credited Mike Rencheck, who was named as Bruce Power’s president and CEO in 2016, for turning around a previous adversarial relationship.

“I’m really excited to see this economic relationship flourish,” said Anoquot, who is in his second term as Saugeen’s chief. “I’m looking forward to this new partnership and the new partnership we have with Bruce Power.”

David Abbott, the director of Indigenous relations and business partnerships at Bruce Power, said long-term and sustainable relationships are being sought with Indigenous communities.

“I think we’ve had interactions that have developed trust to get us to a point where we can have meaningful discussions regarding economic development,” said Abbott, a member of Pay Plats First Nation in northern Ontario.

Abbott’s responsibilities with Bruce Power include managing and executing its community engagement plans and partnership development.

Ryan, who has been working with SON since 2015, said parties needed to be amendable to fixing previous broken relationships.

“We had to get a plan where we wanted to collaborate with each other besides a regulatory checkpoint,” she said.

This was in part accomplished by developing various committees to move the relationship in a positive forward manner.

“There’s a lot of meetings and committees,” Ryan said. “Having dialogue on a regular basis helps in building trust.”

Greg Nadjiwon, the chief of Chippewas of Nawash Unceded First Nation, is pleased to see the relationship with Bruce Power is no longer sour.

Nadjiwon is also happy to see his First Nation is now a participant in discussion involving issues on its lands.

“In our territory we expected to be included in ideas,” said Nadjiwon, who also credited Rencheck for improving the relationship between Bruce Power and First Nations. “We don’t want to come in after the fact. I believe we’re there.”

Nadjiwon believes it only makes sense to have a working relationship with those at the nuclear station, since it is expected to be around until 2065.

“We want to find ways to work with it and to get equity out of it,” he said.

The panel was moderated by Luanne Whitecrow, CCAB’s director for the Progressive Aboriginal Relations program.