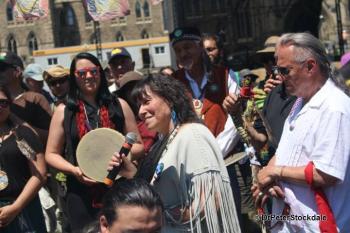 “They took the position that they needed to do something (and) the only way that you can gain a position is to be asserting Indigenous title.” — Michael Swinwood, legal counsel for the grandmothers
By Shari Narine
Windspeaker.com Contributor

The Traditional Grandmothers of Pikwakanagan want the Ontario Superior Court to rule that they represent the “Tiji Pikwakanagan and all other members of the Algonquin Anishinabe Nation” and they, not a chief and band council under the Indian Act nor an organization of First Nations, have the right to negotiate with the federal and provincial governments and private developers.

“With this court case, the grandmothers from Pikwakanagan have come together and … grandmothers are a council that speak and they have to be adhered to,” said Jane Chartrand.

Chartrand and Matriarch Jacqueline Sarazin are the plaintiffs named on behalf of the traditional grandmothers in the legal action, which began in 2016.

A “fresh amendment” Statement of Claim was filed this July. The claim is in case management by Superior Court Justice C.T. Hackland in Ottawa.

Before the proceedings can go further, however, Hackland has to rule on a representation order, says Michael Swinwood, legal counsel for the grandmothers.

“This is all going to culminate in one big hearing. We’re either going to be defeated or we’ll prevail. It’s our task to show that the traditional grandmothers are the proper title holders and not a chief and band council,” said Swinwood.

He adds that the United Nations Declaration on the Rights of Indigenous Peoples supports the contention that the Algonquin are a matriarchal society.

Swinwood expects the representation hearing to take place in October or November with the decision to come within 15 to 30 days of the hearing.

“If we’re successful in the sense of being acknowledged by the court as the proper representative, that’s going to change the complexion of everything we’re doing,” said Swinwood.

However, he did not comment on what would happen to the court action if the traditional grandmothers are not acknowledged as the proper representatives.

A number of issues have spurred the grandmothers into taking legal action.

First is the 36,000-square-kilometre Algonquin land claim, the largest land claim being negotiated in Ontario, between the two levels of government and the Algonquins of Ontario (AOO).

As far as Chartrand is concerned, the AOO has no authority to negotiate on behalf of the Algonquin.

The AOO consists of 10 communities. Only the Algonquins of Pikwakanagan First Nation has an elected chief and council. The other nine communities each has an Algonquin Negotiation Representative. The 10 communities signed a protocol agreement in 2004 to work together.

Chartrand points out that when the ratification vote was held for the proposed Agreement-in-Principle in 2016, the AOO overall voted in favour. However, the Algonquins of Pikwakanagan First Nation held a separate vote and did not ratify the proposed AIP.

Another issue of contention for the grandmothers is the acquisition by property developer Windmill Development Group of the unceded Algonquin land of Albert and Chaudiere Island.

“The developer buys land, but it was never for sale. It had been leased to lumbermen. When the last lumbermen had finished with it, it was to come back to the Algonquin. Now they’re building condos on it,” said Chartrand.  “We want them to move their condos somewhere else.”

The land under development includes the Chaudiere Falls, a sacred site.

Windmill Development signed an agreement in 2015 with both the Algonquins of Pikwakanagan First Nation and the AOO for development on those lands.

Chartrand contends the Algonquins were not consulted about the development. She says she took Whiteduck to task over what was happening when he said members would be employed in the development.

“I said, ‘You mean to tell me you sold out a sacred site for a job creation program’?” Chartrand told Windspeaker.com.

The court action names chief and band council of the Algonquins of Pikwakanagan, the AOO, Windmill, and the federal and provincial governments.

His argument further suggests the Indian Act is apartheid and genocide and compromises the representative powers of chief and band councils.

The earlier court action had to be dropped because of the high financial costs to those plaintiffs.

Swinwood says he did not approach the traditional grandmothers in order to give new life to an old claim.

“They took the position that they needed to do something (and) the only way that you can gain a position is to be asserting Indigenous title,” he said.

Chief Kirby Whiteduck declined to comment on the issues raised in this article as the matter is “before the courts.”