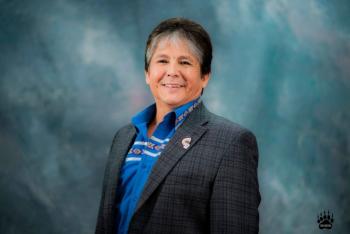 “We need more Indigenous technology leaders for our youth to look up to. We need to showcase Indigenous success in technology and we need to get all our communities connected.” — Chief Clarence Louie, Osoyoos Indian Band
By Sam Laskaris
Local Journalism Initiative Reporter
Windspeaker.com

Clarence Louie has seen his share of changes since first becoming chief of the Osoyoos Indian Band in British Columbia in 1985.

Louie, however, is now a huge technology advocate. And he was one of the speakers at the National Indigenous Virtual Tech Conference, which began Wednesday and concludes today.

The event was organized by Clear Sky Connections, the largest Indigenous-owned telecommunications network in Canada. The conference theme was Digital Sovereignty.

Louie’s presentation was titled Creating a Path to Self-Sufficiency: Investing in Our Technological Capacity.

“Digital sovereignty is so important to Indigenous people in today’s world of doing business and nation building,” Louie said. “We have conferences on health and education. And it’s so timely that in today’s world now we’re having conferences on technology because we all carry around what is now called the black box. And we look at that thing 100 times a day, seven days a week.”

Louie realizes the importance of being connected to the outside world.

“Our communities need to be connected in order to do business nowadays, in order to do proper governance,” he said. “Technology today affects even our health.”

Sitting on a provincial health board, Louie hears of advances happening throughout the world and is keen to bring some of that technology to his people. He marvels at the thought of being able to monitor one’s diabetes or check heart status via a phone app.

Louie said all Osoyoos businesses currently rely on technology, for a number of reasons, including to assist with their social media.

“Self-sufficiency in today’s context, on or off the rez, means we need to improve our capacity,” he said. “And yes, we do need digital sovereignty. We need that as Indigenous people.”

Louie recently completed his 21st year of serving on the National Indigenous Economic Development Board (NIEDB). He stepped down from the board after being its chair for 14 years.

Through his NIEDB work, Louie discovered less than one per cent of Indigenous people in the country are employed in the technology fields. That’s a figure he finds concerning in what is one of Canada’s most thriving industries.

“As First Nation leaders, we need to make technology a priority in every one of our operations,” Louie said. “It doesn’t matter if you’re in business or if you’re in health or in education. As Indigenous people and as leaders we need to promote and encourage Canada’s youngest and fastest growing population, the Native youth, to get involved in jobs, in careers and get interested in technology.”

Louie is certainly doing his part. Last year he helped form a company called Indigenous Tech. Its mandate is to assist Indigenous youth by providing skills and training in the technology fields.

Indigenous Tech has already worked with a number of high-profile companies including IBM, Microsoft and Amazon.

As for his First Nation, Louie realizes the importance of keeping up with technology in order to survive and thrive.

“As we grow here at Osoyoos, many First Nations people, Métis people and Inuit learn we have to share our stories as Indigenous people,” he said. “We were the first entrepreneurs of this land. Archaeological evidence proves that our trade routes extended thousands and thousands of miles north, south, east or west. And we have to use the modern means and modern ways of engaging in business.”

Louie also said technology plays a vital role in education. A few weeks ago he attended a Zoom program where youth from his First Nation were being taught the Okanagan language.

“We do need the Internet to save our languages and to help our students,” he said. “Any community in today’s world needs to be connected to the Internet. Not being connected, your youth will fall behind in education.”

Louie added lack of connectivity also has other setbacks.

“Not being connected, your people will suffer more health problems,” he said.

Louie believes the importance of having Indigenous communities connected should be a priority for governments.

Louie believes so much more can be done on this front.

“We need more Indigenous technology leaders for our youth to look up to,” he said. “We need to showcase Indigenous success in technology and we need to get all our communities connected. We need to bring that to the federal and provincial governments of how important that is.