Give voice to the marginalized, Archibald says in address to NAN chiefs 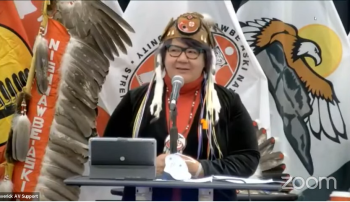 “I’ll continue to support your communities and stand with you and advocate with you on the issues that matter to you.” — Assembly of First Nations National Chief RoseAnne Archibald
By Shari Narine
Local Journalism Initiative Reporter
Windspeaker.com

“There is much work to be done as leaders on this healing path forward. That’s what my commitment is as national chief. We owe it to our future generations to express our sacred gifts, to be active in decision-making, and for all of us to push back against the colonial system,” she said.

The Healing Path Forward is a document produced by the AFN to “influence and shift” the work undertaken by the federal government. It was introduced prior to the 2021 federal election.

Archibald said the document was about building a better future for First Nations, which includes equality and equity that would lead to the “same things every municipality has,” such as clean drinking water, adequate housing and proper services.

“Ever since I was elected … 10 months ago, I’ve been working alongside regional chiefs as well as our federal partners to ensure that First Nations’ priorities are top of mind and that commitments that are made are followed through,” she said.

Meeting those goals would require the federal government to change its budget process, she said. Despite the AFN doing a pre-budget submission with an investment request of approximately $104 billion, financial allocations fell woefully short in the April budget.

“The federal government continues to purposefully underfund First Nations and restrict our communities from accessing our true wealth from our lands and resources,” she said.

First Nations need a new economic deal that allows them to have autonomy, self-government, self-sufficiency and self-determination, all of which are guaranteed in the Constitution, said Archibald.

She pointed to the Ring of Fire, a significant mineral development region in northern Ontario. She said minimal impact benefit agreements with First Nations and promises of jobs weren’t enough.

“We have to move to being owners of those developments, to have a piece of the wealth. This is something that I’ve started to talk about and I will continue to talk about as I move through my term: The new economic deal that we need,” she said.

But changes aren’t only needed at the federal level. First Nations need to conduct business in a different way as well, she said.

Archibald, who was elected July 2021, stressed that efforts had to be made to ensure all marginalized voices were heard, including women, youth and two spirited, lesbian-plus.

To that end, she said, the AFN is establishing a national caucus of elected women leaders, who will meet for the first time in Vancouver at the AFN’s annual general assembly in July.

She said the only way the number of missing and murdered Indigenous women and girls can be decreased was for men and women to work together.

The AFN also has its first two spirited, lesbian-plus council.

Archibald said she and her office were in dialogue with the youth council to see how they could assist in meeting its goals nationally.

“I stand before you as the first woman national chief. And how long did it take for that moment to happen? And how long will it take for us to listen to these other voices and to continue to lift up women, and youth, and 2SL (plus) people and other people as well who are marginalized… (that) we need sitting at this table,” said Archibald.

“I do want future generations to look at this moment and see this turning point that we are on. That we have turned a corner and that this momentum that(we are) building is going to continue, that’s it’s unstoppable. That these changes have arrived and that we need to embrace one another,” she said.

Archibald stressed that she would continue to call for accountability when it comes to the lives of children lost at Indian residential schools. Archibald was recently at the United Nations where she called for the special rapporteur to come to Canada to investigate the deaths and burials of children at Indian residential schools. She said she wanted to see that work happen alongside the special interlocuter the federal government is considering appointing.

Archibald also stressed the need for Pope Francis to apologize to residential school survivors on Canadian soil for the role of the Catholic church. In March, at the Vatican, the Pope apologized to delegates from the First Nations, Métis and Inuit for the behaviour of some Catholics. It is anticipated that the Pope will visit Canada in July.

Archibald committed AFN to standing with organizations like NAN for systemic change in addressing “overt, covert, and systemic racism in this country. It affects all of us in every sector, particularly in Canada’s policing and justice system.”

She noted that of the 94 calls to action from the Truth and Reconciliation Commission on the legacy of Indian residential schools, 21 of those calls relate to justice or the legal system.

“I’ll continue to support your communities and stand with you and advocate with you on the issues that matter to you,” said Archibald.

May 10 marked the first of a three-day Chiefs Spring Assembly for NAN. Discussions will include health transformation, child welfare, reclamation and healing, emergency management, education, policing, the opioid crisis, and the NAN housing strategy.