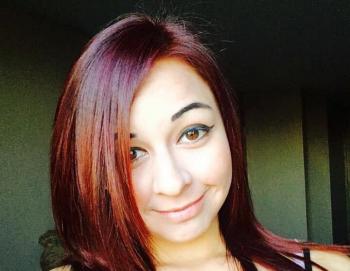 Christine Wood, 21, was killed by a man she met on an online dating site when she traveled to Winnipeg to pursue an education.

“To me, there will never be closure.” — George Wood, grieving father
By Shari Narine
Windspeaker.com Contributor

Until the political will is there, young Indigenous women like Christine Wood will continue to be vulnerable as they follow their dreams to large urban centres.

Speaking at a press conference on July 2 in Winnipeg, George Wood said his daughter left her home in the remote community of Bunibonibee Cree Nation (Oxford House) to pursue higher education in Winnipeg. Education, he said, was one of her passions.

Christine, 21, went missing in August 2016 after she responded to the online dating website Plenty Of Fish.

Brett Overby, 32, was found guilty of second degree murder in her death. On July 2, he was sentenced to life in prison with no chance of parole for 15 years. Overby admitted to killing Wood in the basement of his Burrows Avenue home in Winnipeg. Her body was discovered 10 months later where he had buried her near a farmer’s field east of Dugald, Man.

Online dating, lack of cultural support, being too trusting and naïve, these are all things young Indigenous women and girls who travel from their remote First Nations communities must become aware of before they get to urban centres, said Hilda Anderson-Pyrz, manager of the Murdered and Missing Indigenous Women and Girls liaison unit with Manitoba Keewatinowi Okimakanak Inc.

“If we can start establishing those different education tools at an early age that will really create a lot of awareness and potentially prevent some of the tragedies from occurring,” said Anderson-Pyrz, who provided support to the Wood family during the trial.

“The (federal) government needs to establish strategies to be implemented across Canada for prevention and awareness and, right now, there’s very little commitment from the government,” she said.

“We’re hopeful that with the National Inquiry’s findings there’s some kind of national action plan established and implemented from all levels of government to ensure that we change the lens to not have to focus on our tragedies, but to focus on prevention and awareness.”

Action from all levels of government – and more – were outlined in the final report delivered by the National Inquiry into Murdered and Missing Indigenous Women and Girls last month which tallied 231 Calls for Justice.

However, she is unwilling to let this report be one more report sitting on a government shelf collecting dust.

“In my role I’m very passionate about creating change and seeing that change during my lifetime because it’s important to me because I have daughters and granddaughters and think of all those generations to come still.

“We want them to be able to walk a path that is safe for them and not to have to walk the same path my grandmother, my mother, myself have had to walk with all the different barriers that we faced as Indigenous women and girls,” she said.

“As the chief of my community I will continue to push for the leadership to work together to create safer spaces for Indigenous women and girls,” he said.

“We will ensure that we as an organization will continue to make awareness, create awareness for young Aboriginal women in urban areas so they can be safe, that they can be protected,” said Settee.

MKO has also committed to sharing the Calls for Justice on its Facebook page.

MKO will continue to support the Wood family as long as is necessary, said Anderson-Pyrz, ensuring they have all the resources they need.

“Their next step is to focus on reconnecting as a family because they’ve been through so much tragedy and so much grief and so much loss, sometimes you need to re-establish those relationships with family to go forward in your healing together,” she said.

It will be difficult, said George Wood. "I know there's been talk about closure. To me, there will never be closure.”