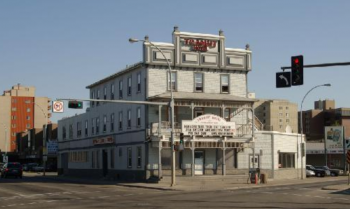 The old Transit Hotel is no longer serving as the Gathering Place.

“We play a vital role for some of those community members that aren’t able to make ends meet at times.” —Dave Ward, executive director of Ambrose Place
By Shari Narine
Windspeaker.com Contributor

NiGiNan Housing Ventures is scrambling to provide services for families in need in Edmonton’s north end after its permit to serve meals and offer referrals at the former Transit Hotel was pulled last week.

NiGiNan is a registered charity formed to address the needs and requirements of Indigenous people living in Edmonton.

Cunningham says her organization was asked two years ago to assist in the Fort Road area where a large number of Indigenous people were having difficulty getting housed. After meeting with individuals and “breaking bread with them,” NiGiNan began offering services in 2017 from the Mosaic Centre along Fort Road. A “philosophical disagreement” with the Mosaic Centre sent NiGiNan in search of a new location. A few doors down, the Transit Hotel was slated to close in June 2017 after 109 years of operating.

Cunningham says the hotel’s owner offered NiGiNan the restaurant space on the main floor to establish the Gathering Place, also known as Mawacihitowin Otah. In November 2017, NiGiNan began serving breakfast and lunch and offering access to Elders, housing support workers, and referrals such as to the food bank. NiGiNan used the Transit Hotel’s neighbourhood pub and restaurant permit to operate.

Then NiGiNan found out it needed its own permit.

The permitting officer used his discretion in giving the Gathering Place the go-ahead to continue operating under the same type of permit the Transit Hotel held, says Dave Ward, executive director of Ambrose Place, which is operated by NiGiNan.

The permit was received this past August. As part of the city’s process, the direct area was notified of the permit approval.

The Fort Road Business and Community Association and some businesses appealed the permit. The city’s Subdivision and Development Appeal Board decided the Gathering Place, which operated as a daily four-hour drop-in centre, could not be considered a restaurant.

On Sept. 23, said Ward, there were 70 people lined up outside the closed site.

“It happened to fall on a (personal development) day for schools. Several children were there with their parents,” he said. “We play a vital role for some of those community members that aren’t able to make ends meet at times.”

Ward says assumptions were made about the services the Gathering Place was providing which led to the permit being appealed.

“Folks were associating some of the crime rate in the area to our service delivery, when really, if you do research on this kind of service delivery, you fully know that establishing a positive relationship with people and providing opportunities to access food and secure homes really prevents crime,” he said.

While Cunningham doesn’t want to go into details over the concerns voiced by the Fort Road Business Association, she does admit that an issue raised was the impact the Gathering Place could have on the ongoing work to revitalize the Fort Road area.

“This isn’t about being in confrontation with anybody. Our focus is to service the people that are in need there,” she said.

People who can bring their families to the Gathering Place for two meals a week don’t have to choose between paying for food and paying their power bills, she says.

Cunningham says the goal now is to work with partners, especially those with commercial kitchens in the area who understand there are people in the community who are struggling and that there is a need for the Gathering Place.

This is not the first time NiGiNan Housing Ventures has faced adversity.

In 2012, construction was halted on Ambrose Place in downtown Edmonton after two years of work. The 42-unit apartment, aimed at homeless Indigenous adults with addiction issues, mental illness, or physical disabilities, was challenged in court by the McCauley Community League. MCL claimed that there was already too much social housing in the area and that zoning issues existed. The Alberta Court of Appeal disagreed, allowing Ambrose Place to go ahead. The apartment opened its doors in 2015.

“Ambrose has showed its track record of being a very open organization and we deliver services in a good kind way. The neighbours here on this street now really appreciate us. And they have come and sat in the reconciliation circle and apologized for everything that went on prior,” said Cunningham.

As for the future of the Gathering Place in north Edmonton, Cunningham understands that “people fear what they don’t know.”

However, she implores potential partners to step forward before the snow flies and “to have a bigger heart and open mind.”

The Fort Road Business and Community Association did not respond to requests from Windspeaker.com for an interview.