Gaps remain in service during emergency events in First Nations 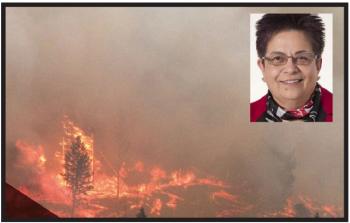 “I think it’s a guide. I think we’ve hit all of the major areas that needed to be hit.” —Skawahlook Chief Maureen Chapman on the report “Addressing the New Normal: 21st Century Disaster Management in British Columbia”
By Shari Narine
Windspeaker.com Contributor

At the Assembly of First Nations Special Chief Assembly this week, chiefs will be considering two resolutions that deal with emergency management on reserves across Canada. Both resolutions call for adequate funding from the federal government to address the “entirety of the emergency management continuum (mitigation and prevention, preparedness, response, and recovery).

Compared to non-Indigenous communities, First Nations communities are “disproportionately affected” by emergency events for a number of reasons, reads the report “From the Ashes”, such as “their relative remoteness, isolation in the fire-prone areas and limited access to emergency services.”

Almost three weeks after a state of emergency was declared due to flooding in the remote Bearskin Lake First Nation in northern Ontario, the 362 residents who were evacuated to Thunder Bay and Sioux Lookout began heading home on Nov. 29.

Whether residents benefited from any of the 11 recommendations that came forward in “From the Ashes” is still too early to tell, says a spokesperson for Nishnawbe Aski Nation (NAN), of which Bearskin Lake Nation is a member.

“From the Ashes” was released in June 2018 by the House of Commons Standing Committee on Indigenous and Northern Affairs, and while it’s focused primarily on fire safety, it also looked at the larger picture of emergency management in Indigenous communities.

One evacuee from Bearskin Lake posted on Facebook that evacuation flights were delayed and limited and that questions went unanswered. “Basically everything, I mean everything, feels so uncertain,” she wrote.

The need for better communication was one of the recommendations made in “From the Ashes”. It read
“given the existing gaps in … infrastructure in rural and Indigenous communities across Canada, evaluate new mechanisms that will enable an accelerated deployment of such (broadband and telecommunications) infrastructure in emergency situations facing Indigenous communities.”

NAN Grand Chief Alvin Fiddler was one of 47 witnesses to present through the nine public forums hosted by the committee that produced “From the Ashes”.

The Canadian Red Cross also participated in the work undertaken by the committee. The Red Cross provides a wide range of emergency services for Indigenous communities upon the request of Indigenous Services Canada, a provincial or territorial government, or Indigenous leadership.

“We have been involved in Indigenous response across the country and what that validates is that there’s a wide degree of capacity and readiness,” said Melanie Soler, vice president for emergency management with the Red Cross.

In the evacuation of Bearskin Lake, the Canadian Red Cross supported 173 evacuees with personal services and information in Thunder Bay at the request of that city. That number varied as First Nation members moved between the two evacuation centres. Sioux Lookout did not request help from the Red Cross.

“We’re involved every year in northern and remote communities in Ontario for flooding that happens annually and when those communities come out (they) are at the service and discretion of the host communities. In that case, the Canadian Red Cross would endeavour to work with the host communities to identify what role we might have in order to support those evacuees while they’re out,” said Soler.

According to “From the Ashes,” there are “significant gaps in the current approach to emergency management” in First Nation communities.

It’s these gaps that the Red Cross attempts to fill. It includes working with communities to prepare for disasters; assessing vulnerability and capacity within those communities; executing the response plan; and working within the host community to support both the host and the evacuees with lodging, food, and personal services.

Costs for the services provided by the Red Cross may be billed to the authority that activates the services, but ultimately the bill is picked up by federal government.

“Cost sharing evacuations are well laid out by Indigenous Services Canada and well understood about things that are covered, things that are not covered. In some cases we have been able to utilize our own funds to provide additional services,” said Soler.

However, in 2013 the Office of the Auditor General said the annual budget for the Emergency Management Assistance Program, administered by Indigenous Services, was inadequate.

Between 2012 and 2017, the Red Cross provided services to 337 Indigenous communities in risk reduction, violence and abuse prevention, social emergencies, and emergency management. More than 100 of those engagements included emergency response although not necessarily evacuations.

Soler says the emphasis from the federal government on emergencies has been changing.

“The observation is that aside from evacuation costs, there is more and more focus on considering costs for disaster risk reduction and preparedness in communities as eligible costs which is a real benefit to those communities,” she said.

The committee’s work was spurred on by the varying responses, ranging from poor to adequate, in addressing the emergency situations that occurred in the summer of 2017 as First Nations experienced 49 wildfire emergencies with nearly 13,000 people evacuated from their communities.

British Columbia has had considerable success in implementing another report that come out in 2018— “Addressing the New Normal: 21st Century Disaster Management in British Columbia”.

Skawahlook Chief Maureen Chapman was a co-author of that report which produced 108 recommendations as a result of BC’s “unprecedented flood and wildfire 2017 season” which the report said “may not have been an anomaly, but a strong indication of a new normal our province and planet now face due to the unpredictable and increasingly volatile impacts of climate change.”

To that end, said Chapman, mitigation work has begun to try and prevent the need for evacuations.

“The firekeepers in our First Nations communities, their traditional knowledge, (the BC government has) totally embraced that so they’re working together to make the forest safe again,” she said.

“The number one recommendation was to include First Nations people from beginning to end and they’ve been doing a lot better job of that,” said Chapman. At Premier John Hogan’s annual gathering with the chiefs in November, they were told that about 85 per cent of the recommendations had been met.

She said the unmet recommendations were “more the internal policy piece for government.”

Chapman says she has heard that the recommendations made a difference in recent evacuations.

“From the people that I’ve talked to, especially those who were impacted the year after we finished our report, they had shared with me that things were better than they were,” she said.

Chapman is confident that this report could act as a tool or resource for First Nations across Canada, to be adapted according to geography.

“I think it’s a guide. I think we’ve hit all of the major areas that needed to be hit,” she said.