Game changer for Indigenous organizations as Netflix signs on as partner 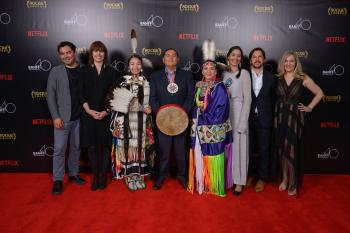 On June 11 at the 2019 Banff World Media Festival, Netflix joined imagineNATIVE, The Indigenous Screen Office (ISO) and Wapikoni Mobile to announce partnership programs to develop the next generation of Indigenous creators.

“This funding is a significant investment in opportunities for Indigenous directors, producers, and screenwriters in Canada, and marks one of the largest sponsorships in imagineNATIVE’s history.” —Jason Ryle, executive director, imagineNATIVE

imagineNATIVE, the Indigenous Screen Office (ISO) and Wapikoni Mobile joined Netflix June 11 in Banff to announce a suite of partnership programs that will develop and nurture Indigenous creators across Canada.

The programs range from screenwriting intensives to apprenticeship programs.

The Netflix-imagineNATIVE partnership is described as game-changing with an “unprecedented level of support for Indigenous filmmakers.”

“This funding is a significant investment in opportunities for Indigenous directors, producers, and screenwriters in Canada, and marks one of the largest sponsorships in imagineNATIVE’s history,” said Jason Ryle, executive director.

There is an urgent need for professional development programming designed from Indigenous perspectives and delivered within Indigenous contexts by an Indigenous-run organization, reads a press statement.

There is a three-and-a-half-year commitment to six activities for Indigenous screenwriters, directors and producers through imagineNATIVE Institute department. The activities include producers and director labs, screenwriting intensives, storyteller incubators, mentorships and more.

The Indigenous Screen Office (ISO) will provide what’s referred to as second phase support for Indigenous projects, those that have already received development support through other programs like imagineNATIVE, Hot Docs, or others. The program will include two streams: Key Creative Apprenticeships, and Cultural Mentorships for directors, producers, screenwriters and showrunners.

“ISO spent the last year in consultations with Indigenous creators and this fund responds to their expressed need for new funding opportunities that will advance work and career opportunities, as well as allow them to follow protocols and practices that are central to Indigenous ways of working,” said Jesse Wente, ISO director.

Wapikoni Mobile offers mobile studios and access to tools, spaces, trainers, mentors and coaching in the communities where the next generation of creators live.

The Wapikoni-Netflix partnership will coordinate emerging filmmakers, organize opportunities, and structure a program of both continuing education and professional coaching.

“At Wapikoni, we believe that many young Indigenous artists are isolated from opportunity,” said Odile Joannette of Pessamit First Nation in Quebec, and executive director at Wapikoni.

“Learning from the creative process is at the heart of important social transformations, especially in terms of personal growth, community development, community involvement… The support from Netflix will allow us to continue to foster narrative sovereignty and cinematographic excellence, and we are absolutely thrilled to count Netflix as a partner, not only for our organization, but also for the voices of Indigenous youth.”

Netflix’s support of these programs comes from its fund to develop the next generation of Canadian creators and talent, focused on underrepresented communities in the screen industry. There are 11 other such partnerships developed since the fund was announced in September 2017.

“Indigenous communities in Canada are rich with unique stories, and organizations like imagineNATIVE, The Indigenous Screen Office (ISO) and Wapikoni Mobile are vital to ensuring these voices are heard,” said Stéphane Cardin, director of Public Policy, Netflix Canada. “Netflix is proud to help launch these three programs, which will reach Indigenous communities across the country.”

Netflix is an Internet entertainment service with more than 148 million paid memberships in over 190 countries providing access to TV series, documentaries and feature films across a wide variety of genres and languages.