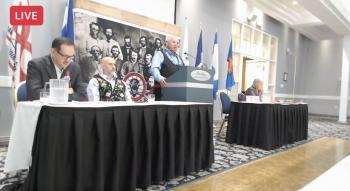 Manitoba Metis Federation president David Chartrand speaks after the signing of a memorandum of understanding between the Manitoba federation and the Alberta Métis Federation. Photo from Métis National Council Twitter feed.

“Now we have this great threat from the east, these hundreds of thousands of people that call themselves Métis, simply because they have some Indian ancestry. They are not part of our history, not part of us.” —Clement Chartier, president of MNC
By Shari Narine
Local Journalism Initiative Reporter
Windspeaker.com

The signing of a Memorandum of Understanding between the Manitoba Metis Federation (MMF) and the newly-created Alberta Métis Federation could spell the end of the Métis National Council (MNC) as it has operated for almost 40 years.

“So from that perspective right now, they’re going to a pan-Aboriginal infrastructure and they will be negotiating their club-style mentality while we will be moving on Section 35 rights. That’s why you have me here (July 21) in Alberta signing an agreement with the communities who believe the same thing we believe on Section 35 rights.”

Section 35 of the Constitution Act, 1982 recognizes and affirms the existing Aboriginal and treaty rights of the Aboriginal peoples of Canada.

Chartrand said 3,000 members at the MMF’s last assembly voted unanimously to give him the mandate to leave the MNC if the Métis Nation of Ontario (MNO) is allowed to register people who do not fit the MNC’s definition of Métis.

The definition for Métis was adopted by the MNC in 2002 and states “a person who self-identifies as Métis, is distinct from other Aboriginal peoples, is of historic Métis Nation ancestry and who is accepted by the Métis Nation.”

“Their position is unbelievable,” said Chartrand. “Everything we stood against, developing since 1983, they’re totally taking MNC in a different road and saying it’s nothing but an empty shell, nothing but a corporation.”

Yesterday’s signing of the MOU by MMF and AMF solidified their partnership as “democratically-elected” bodies “protecting the claims, rights, freedoms and interests of the Métis Nation’s” Métis in their respective provinces.

It was also a battle cry against eastern Métis from Ontario taking over the Red River Métis and their ancestors and changing the western Métis culture.

“Now we have this great threat from the east, these hundreds of thousands of people that call themselves Métis, simply because they have some Indian ancestry. They are not part of our history, not part of us,” said Clement Chartier, president of MNC.

Chartier called out “current presidents” for emphasizing programs, services and funding for organizations and disregarding the sacrifices made by Métis leaders throughout history who fought for nationhood.

The MNC has been embroiled in infighting for the past several years over MNO’s membership which MNC insists includes Métis that do not fit the MNC definition. The MNC suspended the MNO from participating in any MNC business. However, the MNO has been fully supported by the Métis Nation of Alberta (MNA) and the Métis Nation-Saskatchewan (MNS), with a tripartite agreement signed by the three organizations.

He warned that Louis Riel’s vision of the Métis being “swamped by people who are not our people” was about to come true.

“The MMF will be the nation of the Red River Métis, not the sell outs that are selling them down the tube for a dime a dozen. That’s not going to happen under our watch,” said Chartrand.

Chartier called the MMF the “bedrock … the guardians of Métis nationalism.”

“The Manitoba Métis government is the right government to lead us into the future as one people, one nation, one homeland and that is us in western Canada and we can never forget that. I congratulate Alberta Métis Federation … And it makes absolute sense that the first MOU to be signed between the Manitoba Métis government, the government of the descendants of the Red River and those outside the rest of our homeland is between the two of you,” said Chartier.

“Our goals are to share resources and energy and to work together to present a stronger and more united voice on various issues that help the Métis people in Alberta, Manitoba, and elsewhere, making progress toward the real goal of self-government,” said Diane Scoville, chair of the AMF.

The non-legally binding MOU calls for the two federations to “engage in cooperative and open dialogue to identify and address priorities and develop common approaches” while at the same time “recognizing and respecting the independence of the other and acknowledging this may lead to divergent approaches and goals.”

The AMF was created in 2020, when a group of six northeastern Métis community associations rescinded their memberships in the MNA. The AMF claimed that the MNA was not the only body that had jurisdiction to represent Métis in Alberta. Since then, the Edmonton Métis Community Association has joined AMF.